Israel's fix for dangerous Gaza route will only worsen matters

Instead of widening the dangerous old road leading to the vital Kerem Shalom Crossing, Israeli Transportation Minister Yisrael Katz has decided to limit the operating hours of trucks bringing provisions into Gaza. 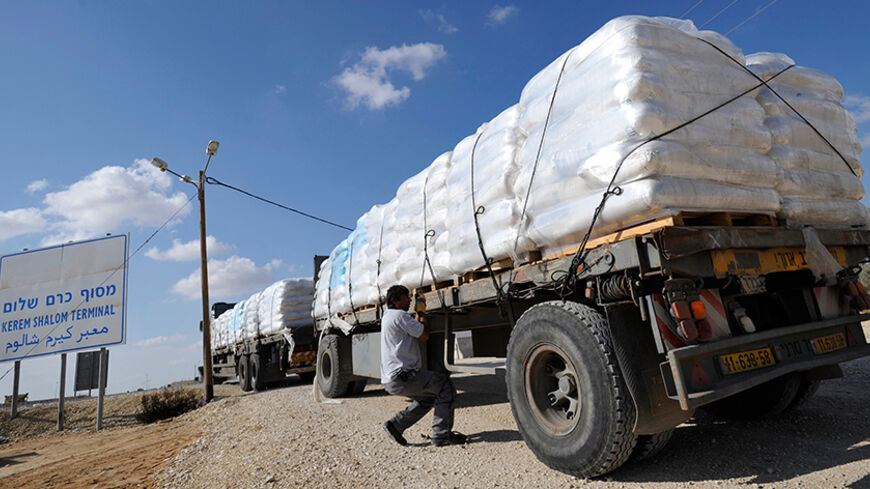 Israeli Transportation Minister Yisrael Katz succumbed to the pressure from residents of the Eshkol region surrounding Gaza. Katz decided that starting May 2 truck traffic will be prohibited in the mornings and afternoons on Route 232, the only available road to transport food and other merchandise into the Gaza Strip. This decision is expected to impact the activity of the Kerem Shalom crossing, the only lifeline for Gaza since Egypt sealed most of the smuggling tunnels on its border with Gaza.

According to a source in the Civil Administration, about 1,000 trucks bearing supplies travel on Route 232 every day on their way to the Kerem Shalom crossing, where the annual trade amounts to close to 5 billion shekels ($1.3 billion).

Route 232, which is 80 kilometers (50 miles) long, was paved in 1951 to connect the settlements of the western Negev to the center of the country. For most of its existence, Route 232 was empty at any time of day. After Hamas’ takeover of Gaza, for security reasons, Israel expanded the Kerem Shalom checkpoint for commercial traffic, but was not wise enough to develop suitable infrastructure for the enormous flow of trucks that has overwhelmed the old and narrow road.

In recent years, Route 232 has become a nightmare for the Israeli localities surrounding Gaza. There are traffic accidents on it almost every day, some of them fatal.

Residents of the region have raised an outcry against the dangerous road and the trucks. They have directed their protest mostly to Katz, who has yielded to their pressure and prohibited truck traffic from 7 to 9 in the morning and from 3 to 5 in the afternoon.

An April 13 press release from the Ministry of Transportation noted that Katz’ decision was made after analysis of data presented to him and consultation and cooperation with traffic police and the heads of regional councils in the Negev.

The problem, it seems, is that Katz did not bother to consult with the security forces regarding some significant implications of his decision, which could bring the region into another violent conflict.

According to truck drivers working on the supply line to Gaza, the transfer of food and raw materials to Gaza will be considerably impaired, and the 1.8 million residents will immediately feel a shortage of such essentials as food, clothing, medicine and raw materials.

“The 1,000 trucks will not be able to complete their assignments in only six hours of work. No truck driver will start his drive to Kerem Shalom at 3 or 4 o'clock,” David Abisrur, who has been driving the route for more than five years, told Al-Monitor.

A senior Israeli security source told Al-Monitor this week on condition of anonymity that the Israel Defense Forces and the Civil Administration were very surprised by the decision, which he thought was “quick.”

“How will they understand this decision in the Gaza Strip?” he wondered. “I have no doubt that they will think that Israel is decreasing the supply to Gaza with clear intent to pressure Hamas, which could see the limited supplies as an act of provocation.” According to him, already in June, a month after the limit on truck traffic will take effect, there will be a significant shortage of food in Gaza, “and we can expect to receive Qassam rocket fire in response.”

The recent violent conflicts between Israel and Hamas started with a smattering of Qassam rockets connected to economic distress in Gaza. In December 2008, for instance, the region deteriorated to all-out war because the Hamas leadership thought that massive Qassam fire toward Israel would force the Israelis to lift the blockade on Gaza. Operation Protective Edge, which caused terrible destruction and loss of life, also started with a strategic decision by the Hamas leadership in Gaza to fight the suffocating siege that threatened its regime.

Now one decision that seems minor could put pressure on Hamas, as well as provoke the groups opposing Hamas. They could try to lead Israel and Hamas into an uncontainable conflict.

Israel has refused to allow Hamas to build a seaport that could free Gaza from its economic dependence on Israel, and firmly insists on the continuation of the blockade, while providing supplies itself. Gaza's daily economic life depends entirely on large Israeli companies like Tnuva, Osem, Elite and others, which conduct thriving business with Gaza, despite its hostility to Israel. The dependence on supplies from Israel continues during calm and during war. During Operation Protective Edge, for instance, the Kerem Shalom checkpoint continued its regular activities even when Hamas fired rockets toward Israel. Hamas officials made sure to keep the peace surrounding the checkpoint, enabling it to continue functioning.

The bloody, old and crowded road troubles the residents of the area surrounding Gaza. One can’t blame them for wanting to stay alive. The residents claim, justly, that they have suffered Qassam and mortar fire for many years, and that the constant danger of speeding trucks on the debilitated Route 232 shouldn’t add to this burden.

Instead of ordering the improvement of the road, Katz chose the easiest path from his standpoint and limited the flow of supply trucks to the Gaza Strip. It would have been better for the transportation minister to allocate a small percentage of the profit from trade with Gaza to fund a more efficient and safer solution — both for residents of the region surrounding Gaza and for those of the Gaza Strip, who are forced to rely on a lifeline supplied by Israel.