Jordan cites security concerns as it blocks thousands of Syrian refugees at its border and leaves them stranded in the rocky desert. 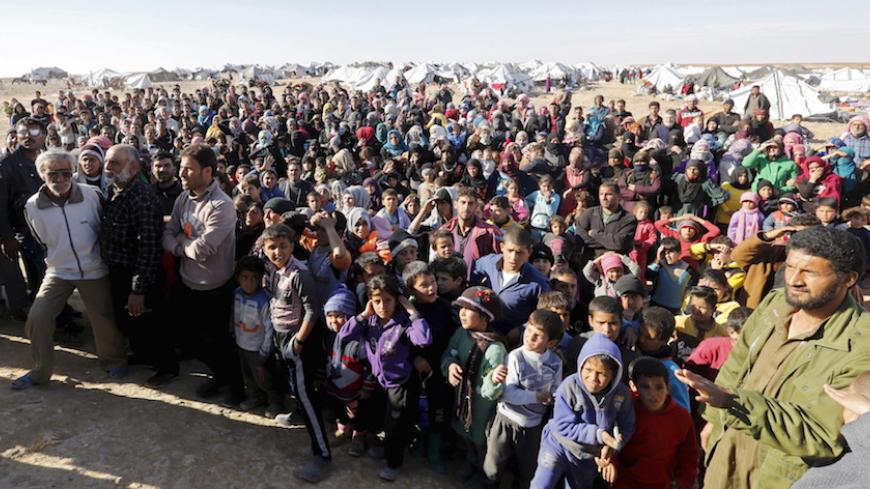 Syrian refugees stuck between the Jordanian and Syrian borders wait to cross into Jordan after a group of them crossed into Jordanian territory, near the town of Ruwaished, at the Hadalat area, east of the capital, Amman, Jan. 14, 2016. - REUTERS/Muhammad Hamed

AMMAN, Jordan — Amman is stranding approximately 50,000 Syrian refugees near the country’s border with Syria, according to multiple UN officials who provided this exclusive information to Al-Monitor. The number of trapped Syrians in Ruqban and Hadalat is nearly double what has been previously reported to be around 26,000 on Feb. 29. Al-Monitor has obtained confidential documents by the Office of the United Nations High Commissioner for Refugees (UNHCR), which show that 53% of the Syrians who have been blocked in this isolated desert are minors.

Al-Monitor has requested since Jan. 24 to visit the “Berm,” the name used by international aid officials to describe this area. The Jordanian military has refused to provide access and allow Al-Monitor to speak with the trapped Syrian refugees.

In a video posted by the Red Cross, a Syrian refugee named Khadija Taleb, whose relatives have been stuck in the Berm after fleeing their Syrian hometown due to heavy bombing, described the area as “an arid desert devoid of everything and inhabited by scorpions, snakes, insects and wild animals.”

Human Rights Watch researcher Adam Coogle, who is based in Amman, noted the large increase of Syrians stranded in Ruqban. Coogle told Al-Monitor, “What that tells me is how terrible things are in Syria that people will just go live in the middle of the desert in a tent with no security just because at least they won’t starve to death. It is just hard to fathom.”

Spokespeople from UNHCR, UNICEF and the Red Cross all declined to provide any details of humanitarian conditions facing Syrian refugees in the Berm. One diplomat told Al-Monitor that if the agencies speak with the media, “they are terrified that their lives will get even more miserable than they already are. Already they have very limited access, but they feel that access could get more restricted.” International aid workers and diplomats fear upsetting the Jordanian government, despite the deteriorating humanitarian crisis.

An international aid official speaking on condition of anonymity described to Al-Monitor the frustration his organization felt not being permitted to provide humanitarian assistance due to the Jordanian government’s restrictions. “We want to be there and support, but we are not getting access.”

While acknowledging the legitimate Jordanian security concerns, diplomats speaking on condition of anonymity based in Amman described the conditions in Ruqban and Hadalat as “horrendous” and “terrible.”

On Feb. 2, King Abdullah II told the BBC that there were “elements” of the Islamic State (IS) among the refugees. Abdullah noted that security forces must perform rigorous inspections to protect Jordan’s security and therefore keep the refugees in this isolated desert. He said that any Western country is welcome to accept the refugees, but no nation has volunteered for the task.

However, on Feb. 29, a senior international aid official rejected Abdullah’s allegations as an “unsubstantiated claim.” The official told Al-Monitor, “There is no evidence of IS infiltration in that group.” The UNHCR data shows that fewer than 7% of the Syrian refugees in the Berm come from Raqqa, IS' capital.

Given that the majority of the population stranded is under 18 years of age and has been languishing in the Berm for many months, an aid official expressed her frustration, “Where is our humanity? Can we actually imagine that the 10-year-old child is first and foremost a potential threat and not somebody who needs assistance?”

Jordan has accepted 638,000 Syrian refugees since the beginning of the 2011 conflict, according to the United Nations.

An international aid worker noted that the United States has the biggest leverage over the Hashemite Kingdom given that Washington provides Amman $1 billion annually in aid in addition to the countries’ strong military ties. However, Washington’s moral credibility on this issue is limited given that President Barack Obama's administration has absorbed only 2,647 Syrian refugees during the first five years of the conflict, according to a thorough New York Times investigation. The Hashemite Kingdom has accepted approximately 200 times more Syrian refugees than America, despite being much smaller, poorer and without significant natural resources. Eric Barbee, US Embassy spokesman in Amman, rejected Al-Monitor’s interview request for this article.

However, even basic humanitarian distribution has become problematic. An aid worker noted that since the Berm is a “black hole,” it is unclear if those most vulnerable, including children and elderly, are receiving their food distributions, since multiple reports describe tribal leaders using their influence to divert the assistance for personal gain.

Security remains a major challenge in the Berm as the Jordanian border guards do not enter the area, especially given the spike of 50,000 Syrians. According to the confidential UNHCR document, on March 13 an asylum seeker threatened a staff member with a knife. Multiple incidents of disorder continue to challenge aid workers, and UNICEF facilities were vandalized on March 12. UNHCR notes that some asylum seekers have sought to register multiple times or include children of others to increase their family size.

Currently, 279 pregnant women reside in Ruqban and Hadalat, including many in their final three months, despite the minimal medical care.

The Red Cross notes that they first provided assistance to those in the Berm one year ago. With the number of Syrian refugees stranded in the Berm doubling during the past two months to approximately 50,000, without any security and limited medical services, Jordan and the international community face a humanitarian crisis that has only dramatically worsened with no end in sight.