European and other officials are calling on Jordan to facilitate food transfers to Rukban, where some 50,000 displaced Syrians are being denied adequate aid. 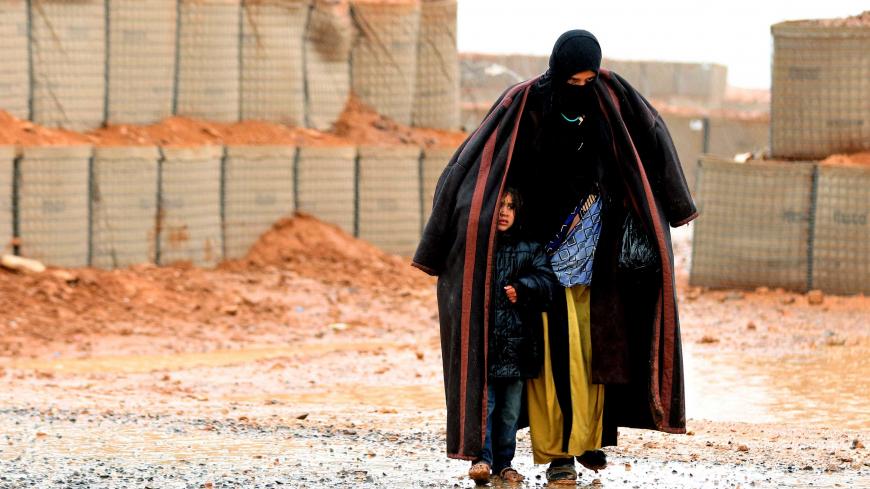 A Syrian refugee from the Rukban camp, which lies in a no-man's-land on the Syria-Jordan border, shelters a young child outside a UN-operated medical clinic on the Jordanian side, March 1, 2017. - KHALIL MAZRAAWI/AFP/Getty Images

Stranded along Jordan’s northeastern border with Syria at Rukban for nearly two years, Mohammad Khader al-Mahya lives in misery. Some 50,000 Syrians live in a 3-year-old desert encampment, hundreds of miles from the nearest city and cut off from international aid workers in a closed military zone. The Jordanian government claims the camp has been infiltrated by the Islamic State (IS) and therefore has prohibited food deliveries to Rukban since June, causing prices on the black market to skyrocket.

Approximately 80% of the refugees at Rukban suffer from malnutrition, an Amman-based European ambassador told Al-Monitor on condition of anonymity. According to the envoy, conditions are so dire that some women are engaging in prostitution to survive. Inadequate health care and poor sanitation have led to the spread of hepatitis and severe respiratory infections, resulting in child deaths. Amid these horrific conditions, the Syrians are mired in place by an international power struggle and unable to receive the assistance they critically need.

“The most difficult part is when your children wake up during the night because of the hunger pangs and you can’t help them,” Khader told Al-Monitor via WhatsApp. Living in a flimsy tent and suffering from the bitter cold, Mahya added, “The entire family is sick, and medicine is not available.”

The Hashemite kingdom has remained steadfast in denying food assistance to the trapped Syrians during the past four months. In June 2016, IS carried out a strike on Jordanian forces stationed near the area, which international aid workers call the Berm, killing seven border guards and wounding 13. Amman thereafter dramatically reduced the amount of food entering Rukban, permitting deliveries approximately once every three or four months, the most recent being in June of this year.

On Oct. 8, the Petra news agency reported that in a meeting with European Union envoys the day of the June delivery, Jordanian Foreign and Expatriate Affairs Minister Ayman Safadi said that “humanitarian aid to the camp residents must be delivered through Syrian territory since it is a Syrian issue.” The location of the Syrians in the Berm is disputed. Jordan claims they are in Syrian territory, while Human Rights Watch says the Berm is located several hundred meters south of the Syrian-Jordanian border, inside the Hashemite kingdom.

Safadi said that despite ongoing fighting, current conditions allow for the delivery of aid through Syria. Petra reported, “Safadi reiterated that Jordan will not accept any solution that would make the Rukban camp a Jordanian problem or depend on the Kingdom as a way to deliver aid.”

Amman frequently points to its generous absorption of Syrian refugees — more than 655,000, according to the United Nations, and 1.3 million by the Jordanian government’s count — as evidence that the country has fulfilled its duty to assist this vulnerable population. Mohammad Momani, the Jordanian minister of state for media affairs and a government spokesman, declined Al-Monitor’s repeated requests for comment.

Multiple senior European officials explained that the resumption of food deliveries to the area is part of ongoing negotiations between the United States and Russia to reduce tensions in southern Syria.

In an Oct. 30 statement to the UN Security Council, Mark Lowcock, UN undersecretary-general for humanitarian affairs and emergency relief coordinator, discussed the delivering of aid to Rukban via Syrian-regime territory. “Immediate access to enable life-saving assistance for the civilian population is critical,” he asserted. “Clearly the best approach is to find a solution from within Syria.”

According to a Nov. 14 internal UN report obtained by Al-Monitor, some progress has been made in the negotiations between the United States and Russia to secure aid to Rukban through Syrian regime territory. The memo cautioned, however, that it will take additional time to receive final approval from the government of President Bashar al-Assad and then a number of weeks to implement the plan.

Western officials are not encouraging optimism. “We’ve seen that in many other places in Syria, humanitarian access granted in principle but in practice nothing happens,” a separate senior European diplomat told Al-Monitor on condition of anonymity. Thus, even starving Syrians trapped in the Berm are unable to escape the ongoing psychological warfare between Moscow and Washington.

Russian government officials blasted the United States for allegedly obstructing humanitarian deliveries to Rukban. Sergei Kuralenko, head of the Russian Reconciliation Center for Syria, charged Nov. 24, “The Russian reconciliation center continues efforts to organize humanitarian deliveries to the Rukban refugee camp. But, despite the earlier agreements with the US force command at Tanf, the UN has received no consent from the US side, which makes it impossible to begin practical actions to organize humanitarian convoys.” The Russian Defense Ministry added in a statement, “At the same time, the American side and illegal armed formations impede establishment of a safe passage for humanitarian cargos to be delivered to the people in the camp.”

Washington strongly disputed the Russians' accusation. A State Department official told Al-Monitor on condition of anonymity, “It is disappointing the Russians continue to make these ridiculous allegations. Not only are these claims inaccurate, they are not based in fact and serve only as a distraction.”

Although Western powers continue to negotiate the delivery of emergency food aid to Rukban through Damascus, analysts are skeptical that it will lead to reliable and regular provisioning. “The Assad government's record on humanitarian aid issues is consistent: it enables or blocks access according to tactical, political needs,” former US Ambassador to Syria Robert S. Ford told Al-Monitor. “It regularly blocks access to populations deemed in favor of the opposition or politically unreliable, and its behavior has drawn repeated, direct criticism from the UN and NGO refugee relief community.”

The New York Times reported Nov. 18 that pro-Syrian government forces had launched numerous attacks in the de-escalation zones agreed to by Russia, Iran and Turkey. One episode, a triple airstrike Nov. 13 on a marketplace killed more than 50 people, highlighting the Assad regime’s defiance of international agreements. Ford, who currently serves as a fellow at Yale University and at the Middle East Institute in Washington, DC, added, “Whatever Russia's true intent, it has never shown it can compel the Syrian government to unblock access [to Rukban].”

An Amman-based international aid official who insisted on anonymity to preserve the possibility of future humanitarian work in Syria discussed another possible risk to food deliveries to the Berm if they are undertaken by the Syrian regime instead of Amman. Given the many urgent humanitarian crises and various negotiations, he asked, “Is the Berm actually going to get lost in the sheer list of priorities?” The aid worker emphasized that emergency medical referrals are being sent to Jordan as the most effective route. Therefore, he believes, the easiest method to continue delivering food to Rukban would be through Jordan.

Syrians began amassing at the Berm in July 2014, fleeing the Syrian war zone and hoping that close proximity to the Jordanian border would offer additional security from repeated airstrikes. Conditions were always tenuous at the informal desert encampment, yet circumstances dramatically worsened after the IS strike. Amman responded by sealing the border, ending asylum processing for the Syrians and severely restricting food and medical care on the ground that the Syrians are an international problem, not Jordan's responsibility.

Nonetheless, despite the extremely difficult conditions at the Berm, according to the United Nations, the number of shelters in Rukban actually increased in September, suggesting the horror ongoing elsewhere in Syria.

Prior to the IS attack, Western officials had pressured Amman to grant asylum to many of the trapped Syrians in Rukban, but they have since changed tactics and lowered their demands.

“We are not asking [for] another massive admission of refugees into Jordan,” the senior European diplomat said. Instead, EU officials, along with international human rights organizations, are calling on the Hashemite kingdom to merely facilitate food transfers to Rukban, while respecting Jordan’s legitimate security needs.

Ford echoed the frustration of many international officials in Amman who have been working on the Berm crisis. “The Jordanian government's refusal to facilitate aid to Rukban, as international humanitarian law requires, is deplorable and puts Jordan in the same ugly camp as the Saudi and Emirati governments that are impeding access to parts of Yemen,” Ford said.