Difficult negotiations over future of 75,000 Syrians trapped in 'no-man's land'

Since the IS June attack on Jordan’s Rukban border with Syria, the Hashemite kingdom has tightened security measures, to the point of banning food and medical aid to the Syrian refugees trapped on the border, prompting negotiations with the UN. 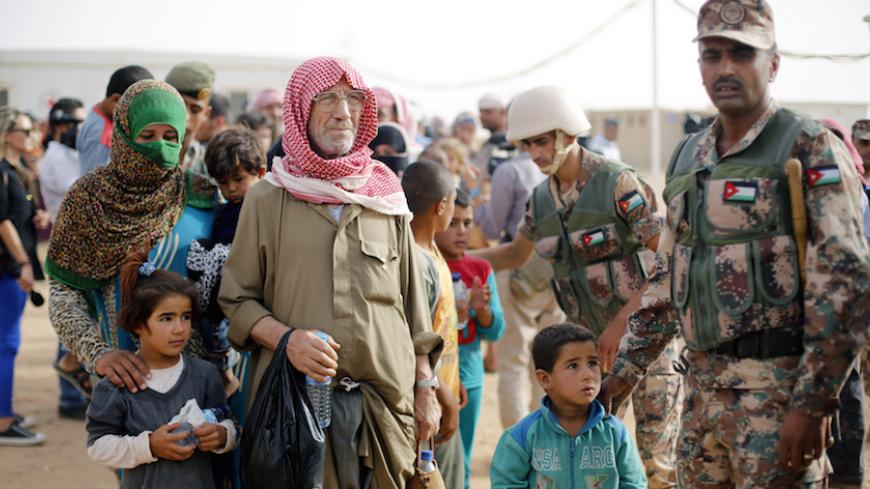 Syrian refugees wait to board a Jordanian army vehicle after crossing into Jordanian territory with their families, at the Rukban border area, near the northeastern Jordanian border with Syria, and Iraq, near the town of Ruwaished, Sept. 10, 2015. - REUTERS/Muhammad Hamed

AMMAN, Jordan — Even prior to the June 21 car bombing, which killed seven Jordanian forces at the Rukban border crossing with Syria, conditions were dire for the 75,000 asylum seekers trapped in the area on the Syrian side. Children make up over half this population that for months has resided in a scorching desert, which diplomats call "the Berm." Refugees describe their temporary dwellings as being filled with mice and snakes. Malnutrition and diarrhea have also spread widely, according to an international aid official who spoke to Al-Monitor on condition of anonymity.

The refugees' conditions at the Berm deteriorated even more when the Islamic State (IS) staged an attack in the Rukban area June 21. Consequently, Amman tightened its security measures and barred food assistance to Rukban for six weeks while denying the refugees any medical care.

Negotiations between Jordan and the United Nations over a long-term solution to the Berm crisis have been difficult. Aid workers expect the talks, which began after the June 21 bombing, to last months due to the wide gaps between the parties. A UN official confirmed to Al-Monitor that negotiations are taking place at the highest levels in New York and have included the five permanent members of the UN Security Council.

An informed foreign diplomat based in Amman told Al-Monitor on condition of anonymity that one of the options being deliberated is a plan to push the 75,000 Syrians approximately 2 kilometers (roughly a mile) away from the border into Syria or deeper into Syria. This would provide Jordan with a buffer zone and reduce the chances of another surprise border attack while boosting the Hashemite kingdom's security. The diplomat added that in conversations with Amman about resuming aid, Jordanian officials repeatedly asked for a "long-term solution," as the Hashemite kingdom says maintaining a camp for 75,000 Syrians so close to its border threatens its security.

However, the head of the UN refugee agency in Jordan, Andrew Harper, told Al-Monitor, "We would obviously not be supportive or engaged in any pushback of Syrians." Given the complex developments at Rukban, Harper added, "There are no magic long-term solutions at the moment." International aid officials worry that moving Syrians could violate the international principle of non-refoulement or the protection against forcible return of refugees to territories where their lives are at risk.

Bill Frelick, director of the Human Rights Watch's (HRW) refugee program, told Al-Monitor that the majority of Syrians living in the Berm are currently residing in Jordanian territory. Therefore, relocating the asylum seekers 2 kilometers away, as being proposed, would transfer them into Syria. Additionally, given the many young children and pregnant women at the Berm, moving this population 2 kilometers would be logistically challenging.

The UN has called on Jordan to resume food and medical care at the Berm, as conducted before the June attack. Furthermore, HRW has urged Jordan to provide the most vulnerable refugees admission into the country and away from the Rukban camp.

But Jordanian government spokesman Mohammad Momani rejected any responsibility for the 75,000 Syrians at the Berm. "Our borders remain a sealed military zone, and addressing the issue of those in the no-man's land is not Jordan's problem," he told the Jordan Times Aug. 6.

Momani had said in July 2016 that the Hashemite kingdom would not permit any future food deliveries to the trapped 75,000 Syrians since "the camp has become a harbor for Daesh [IS]." Using 70-meter (230-feet) cranes, the UN provided aid to the asylum seekers Aug. 4 after Amman granted international aid workers a "one-time" permission to distribute food to the Berm. The Jordanian government's definitive public statements ruling out future food distributions are far apart from the current position of UN officials asking for an immediate resumption of aid and even absorption of additional Syrian refugees.

Given that Jordan and not the UN controls the Rukban border, the foreign diplomat asserted that some human rights organizations have a misguided approach to the negotiations, especially following the IS car bombing in June. If one is looking for a durable solution that Jordan will accept, then the Berm crisis must be treated as a security concern and not just a humanitarian problem.

While the United States already provides Jordan with $1 billion in annual aid, Western countries may have to bolster their financial support of Amman's security. This could convince Jordan to allow humanitarian assistance to flow again through its borders.

In private conversations, some Western officials have admitted the difficulty of pressuring Jordan on the Berm, given the track record of their home countries in regard to the refugee crisis. Jordan has admitted about 657,000 Syrian refugees, according to the UN, approximately 50 times the number the United States has absorbed.

According to UN satellite imagery from July 25, the number of shelters in the Berm housing refugees declined 17% since the period immediately following the June 21 bombing. This may suggest that some of the asylum seekers in the Berm have returned to Syria due to the ban on international food assistance during this period. Since aid organizations are unable to access the Berm, given Jordan’s new policies, they have no way to independently determine the current conditions of the stranded 75,000 Syrians.

A possible motivator for Jordan to adopt a more conciliatory approach in the Berm talks is the September UN summit of world leaders on refugees, which Jordan is co-hosting. If Amman continues its policy of barring food and medical care to the blocked 75,000 Syrians on its border, it will be difficult for the Hashemite kingdom to praise its own refugee policy before global stakeholders.

Noting the lack of progress in negotiations between the UN and Jordan, the international aid official recounted to Al-Monitor the harrowing 2015 pictures of starvation from Madaya in western Syria, which stirred many worldwide into temporarily breaking the town's siege. The official said, "If we start seeing [at the Berm] the same kind of images [from] Madaya during the coming weeks, then everyone will feel pressure."