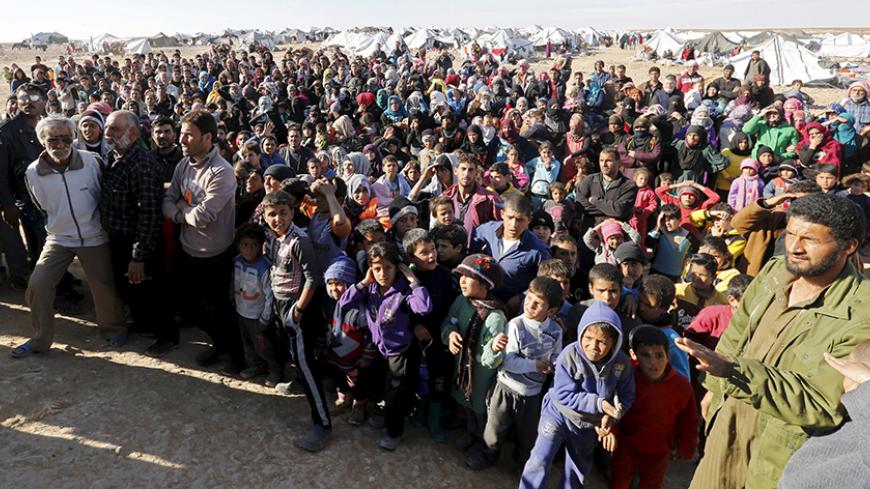 Syrian refugees stuck at the Jordanian-Syrian border wait to cross into Jordan in the Hadalat area, east of the capital Amman, Jan. 14, 2016. - REUTERS/Muhammad Hamed

One European diplomat called the conditions at the border “horrific” and “brutal” in a conversation with Al-Monitor. At least 10 Syrian refugees have died, including two infants during birth, said another European official based in Jordan.

Each of the officials Al-Monitor spoke with for this article requested anonymity due to the sensitive nature of this situation and concern for upsetting the Jordanian government. One individual feared that Amman would not renew his visa, while an international aid official said that Jordan could delay humanitarian assistance to refugees for their publicly speaking to the media about their plight in the "berm" — the name used by humanitarian organizations for this area near the Syrian-Jordanian border.

In a Feb. 2 interview with the BBC, King Abdullah II said there were “elements” of the Islamic State among the refugees, and that some had previously resided in Raqqa, the IS capital. Abdullah explained that security forces must conduct vigorous inspections to protect the Hashemite Kingdom’s security and so keep the refugees in this isolated location. He said that any Western nation is welcome to absorb these refugees, but no country has volunteered to do so.

However, a senior international aid official rejected Abdullah’s allegations as an “unsubstantiated claim.” The official told Al-Monitor, “There is no evidence of IS infiltration in that group.”

The Jordanian military denied Al-Monitor’s repeated requests to visit Ruqban, where most of the stranded Syrian refugees are located.

The international aid official said the “vast majority” of those in the berm are children, elderly, women and people who are sick. Hygiene remains a significant concern in Ruqban, with an aid official explaining that there is a “rat problem” in addition to 350 cases of a parasitic disease called Leishmaniasis.

Andrew Harper, the United Nations High Commissioner for Refugees' representative in Jordan, told AP on Jan. 31 that an additional 4,000-5,000 refugees reach the border area each month.

In September, aid officials said that approximately 3,000 Syrians had arrived in this remote desert area. By December, this number had jumped to 12,000 and has only continued to climb.

Since the Jordanian military does not enter the border area, an international aid official noted the challenges of operating in Ruqban. “It is very chaotic and we are not allowed to go inside the berm because if we go inside, it is at our own risk since there is no security there.” He said that he had heard about people with weapons in the area.

Another informed source explained how women are afraid to go to the bathroom after dark because of a lack of security. He said that with the increased population, tensions have spiked among the refugees, who are competing for limited resources.

While aid officials are able to provide the most basic necessities including water and food, the humanitarian mission is especially challenging since the closest city is about 150 kilometers (90 miles) away from the area, with a limited and poor road network.

According to the UNHCR, Jordan has absorbed 637,000 Syrian refugees since 2011. However, the Jordanian government claims the country is hosting double the number — 1.3 million — and under domestic pressure to limit the intake of additional refugees.

While acknowledging Amman’s legitimate security concerns, a senior European diplomat told Al-Monitor, “The international community has made it clear to the government of Jordan that it cannot have an indefinite situation where these people are stuck on the border.”

The official added, “It is clearly bad for the Jordanian image that they are holding people at the border and [Syrian refugees] are suffering from food shortages, lack of medical care and decent shelter.”

But the European critique of Jordan’s “image” is surprising, given the vast disparity between the number of refugees Amman has admitted compared to European countries that frequently emphasize the importance of human rights. In a Feb. 2 op-ed in the British newspaper The Independent, Abdullah asserted that Jordan’s economy is less than 0.001% of that of the United States and the European Union. Yet Amman has accepted at least 60 times the number of Syrian refugees as that of France and 250 times the number of refugees currently in Italy.

Given the difficult circumstances, what are the specific recommendations of aid workers to end the crisis in the berm? The international aid official Al-Monitor spoke to urged the government to establish a “special high security area in the Azraq camp” — located some 100 kilometers (60 miles) east of Amman — which was meant to house 130,000 refugees but currently only hosts about 18,500 individuals. Under his plan, UN agencies would be able to offer better quality medical and housing services in addition to providing security, which is currently nonexistent in Ruqban. But the Jordanian government has rejected moving the 27,000 Syrians from this isolated area, instead allowing approximately 60 refugees to enter the rest of the country on a daily basis.

Inside the berm, there is no water and no way to grow food, so the 20,000 inhabitants are completely dependent on international agencies for survival. One official said, “There is nothing that people can do to help themselves there. If the truck of water doesn’t get through, the consequences could be dire.”