Why Jordan is unlikely to reconsider decision to close borders

The international community has been pressuring Jordan to reconsider its decision to close its border following an IS attack on one of its border posts, but economic and security concerns indicate the kingdom is unlikely to change its position. 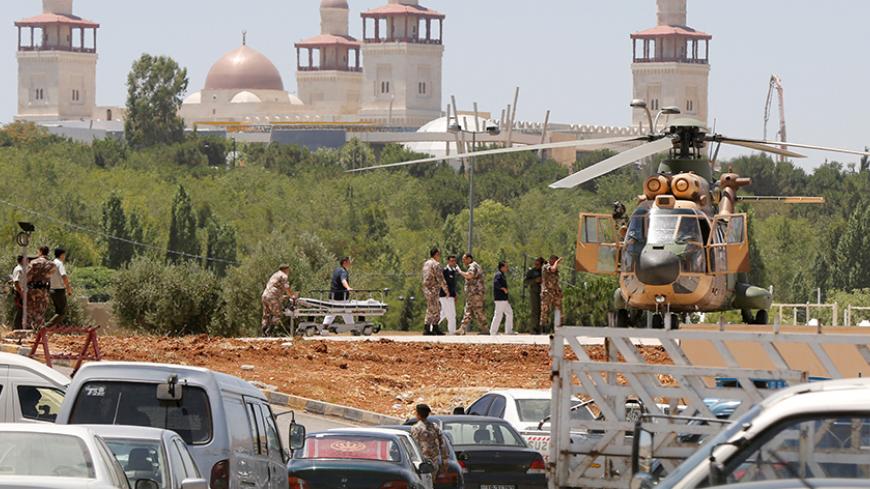 A security member injured during an attack at a camp for Syrian refugees in eastern Jordan near the borders of Iraq, Syria and Jordan, is transported from a military helicopter to Al-Hussein Medical Center in Amman, Jordan, June 21, 2016. - REUTERS/Stringer

Jordan’s decision to close its borders with Syria and Iraq in the wake of a suicide attack against a border post on June 14 in the Ruqban border area with Syria was likely driven by economic pressures in addition to security concerns. Seven security personnel were killed and 15 were injured when a vehicle broke through a sand barrier and exploded in a military post, a humanitarian aid delivery point for refugees. According to a Jordanian army statement, the vehicle originated from inside the refugee camp on the Syrian side of the border. It took the Islamic State almost two weeks to claim responsibility for the attack.

This was the first major attack against a Jordanian border post since the eruption of the Syrian conflict in 2011. Jordan was criticized last year for not allowing thousands of Syrian refugees fleeing atrocities in northern and eastern Syria to cross into the kingdom. At that time, the government said that it was unable to vet the refugees who came from IS-controlled territory.

The refugees, now estimated to number 70,000, gathered in a makeshift camp on the Syrian side of the border. Jordan, under international pressure, has allowed humanitarian agencies to provide them with food and water under army supervision.

Jordan has expressed frustration that donor countries were not delivering on promises of aid to help the government meet its humanitarian obligations toward more than 600,000 registered Syrian refugees settled in three camps inside Jordan. In total, there are about 1.3 million Syrians in Jordan today, making up roughly 20% of the population. In a February 2016 report, the World Bank said Jordan’s estimates show that each refugee costs the Jordanian government $3,750 per year. “The influx of more than 630,000 Syrian refugees is thus estimated to have cost Jordan over $2.5 billion a year,” the report read.

In response to Amman’s decision to close its borders with Syria and Iraq and stop receiving additional refugees, King Abdullah told UN Secretary-General Ban Ki-moon on June 24 that Jordan will not allow any circumstance to threaten the security of its borders and stability, urging the international community to take responsibility in dealing with the refugee crisis, which he said is a world problem, according to a royal court statement.

A few days earlier, on June 21, the king was quoted by the Jordan Times as saying, “Jordan will respond with an iron fist to assaults or any attempts to tamper with the kingdom’s internal or border security.”

While there has been no official reaction from donor countries over Jordan’s latest decision, Amnesty International said in a June 22 statement that the “iron fist” security response pledged by Jordanian authorities in the wake of the car bombing must not descend into closing the border and denying humanitarian aid to tens of thousands of Syrian refugees fleeing armed conflict. The statement went on, “Jordan has a duty to protect civilians from armed attacks — but its security measures must not violate its international legal obligations to provide protection and assistance to refugees who are desperately fleeing the very same type of violence.”

In response, Minister of State for Media Affairs and Communications Mohammed al-Momani, speaking for the Jordanian government, said June 24, “The groups stationed on the northern border are not a Jordanian problem, but an international problem, and international organizations should find a way to help them.” He added, “Jordan’s security and stability are above all other considerations.”

On June 22, Deputy Prime Minister and Foreign Minister Nasser Judeh told the ambassadors of the five permanent members of the UN Security Council and the European Union, in addition to representatives of the UNHCR and the Office for the Coordination of Humanitarian Affairs, “Jordan has always warned from the increase in Syrians’ numbers at the borders, especially since it has amounted to 100,000 people, most of whom are from northern and northeastern Syria, where [IS] members are located. ”

He urged international organizations to find alternative means to deliver humanitarian aid to the displaced.

But more than a week after Jordan closed its borders and suspended aid delivery to the makeshift camp in Ruqban, news reports and international organizations spoke of a deepening humanitarian crisis there. “Around 60,000 people are currently without food, water or health care. They have nothing,” Hala Shamlawi, spokesperson at the International Committee of the Red Cross, said in remarks to Al Jazeera on June 23.

On June 25, the New Arab newspaper reported that tribal leaders representing residents of the informal Ruqban refugee settlement near the Syrian-Jordanian border have appealed to the Jordanian government to help deliver water and food into the camp. There has been no official reaction to pleas to resume delivery of humanitarian aid.

The conflict in Syria has compounded the kingdom’s economic problems. The closure of borders with Syria and Iraq is believed to cost the local economy $2 billion annually, according to the first deputy of the Jordan Commerce Chamber, Ghassan Khirfan. He told Al-Monitor that border closure with Syria has stopped all land transit trade with Europe, Turkey, Lebanon and Russia. He added that closing the borders with Syria and Iraq has had a direct effect on banks, exporters and labor.

Jordan has faced difficult economic conditions for almost a decade now. Its foreign debt has more than doubled and its state budget suffers from endemic deficit while the kingdom’s debt-to-GDP ratio is about 90%.

Head of the Jerusalem Studies Center and political columnist Orieb al-Rintawi told Al-Monitor that following the Ruqban attack, the government is right to review its open border policy regarding Syrian refugees. “Turkey has closed its borders and Europe is building barriers to stop the flow of migrants. Jordan is doing what Europe has failed to do. Why should we keep doing this?”

He added, “Jordan should work directly with the Syrian government through Russia to create safe zones, and this should include all southern Syria after liberating it from terrorists.”

The government’s decision to stop receiving Syrian refugees has been welcomed by most Jordanians. And despite international pressure the government is unlikely to change its position. On the contrary, it may well open communication channels with the Damascus regime to pacify southern Syria and pave the way for the creation of safe havens for refugees, many of whom may be repatriated from Jordan.