Experts argue that Turkey might not react to the announcement of the Federal Democratic System of Rojava and Northern Syria by Syria’s Kurds, as Ankara is currently embattled with its own Kurds on the inside. 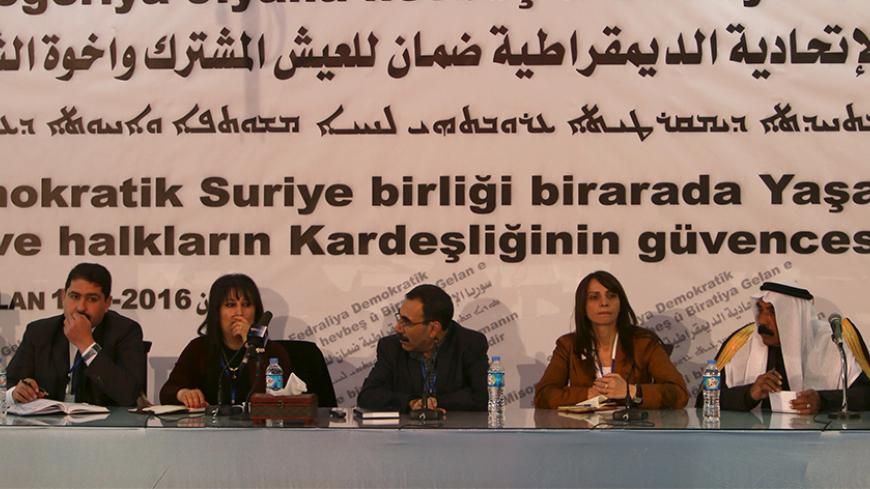 Bureau members of a preparatory conference discuss the announcement of a "Federal Democratic System of Rojava and Northern Syria" in the Kurdish-controlled town of Rmeilan, Hasakah province, Syria, March 16, 2016. - REUTERS/Rodi Said

ERBIL, Iraq — The recent declaration of a federal structure in northern Syria by the local Kurdish administration and its Arab and Assyrian allies is likely to put the Syrian Kurds further at odds with neighboring Turkey, as it will pose serious challenges to Ankara amid renewed conflict with its own Kurds.

The announcement of the Federal Democratic System of Rojava and Northern Syria on March 17 by the dominant Kurdish group, the Democratic Union Party (PYD), and other groups in the area, coincided with a new round of peace talks between the regime of President Bashar al-Assad and armed opposition groups in Geneva. The PYD has been excluded from the talks at the behest of Turkey and opposition groups that view the Kurdish group with suspicion, due to presumed links with the Kurdistan Workers Party (PKK) and perceived cooperation with Assad’s regime. The PYD has denied these charges.

Both the Assad regime and opposition forces have rejected the Kurdish-sponsored federal region, seeing it as a move toward the eventual partition of the conflict-stricken country. Rival Syrian Kurdish groups have also opposed the PYD move, seeing it as a unilateral measure.

The federal zone includes the three cantons of Rojava — Jazira, Kobani and Afrin — as well as Tell Abyad and areas in northern Aleppo governorate that have been captured by Kurdish forces over the past year.

Of all the concerned actors, it is perhaps Turkey that is most infuriated by the move and fears its strategic long-term repercussions for its own stability given the large restive Kurdish population that lives in Turkey.

In a joint press conference with his Iranian counterpart March 19, Turkish Foreign Minister Mevlut Cavusoglu lashed out at the PYD for establishing a federal region. "They want to divide Syria," Cavusoglu said. "With Iran, we support the territorial integrity of Syria."

Many view the PYD as an affiliate of the PKK, but the two groups deny any organic links between them.

Perhaps aware of the backlash that it might trigger not the least from Turkey, Salih Muslim, the co-chairman of the PYD, tried to play down the repercussions of the move.

"This is not a classic federalism … This is about arranging the relations [in northern Syria]," Muslim said. "This is an agreement between the groups there on how to take and give. Before it was a small region, now it has been expanded," he noted.

The Syrian Kurds' establishment of what they term a "non-ethnic" federal zone comes amid international discussions on a possible solution to the five-year-old conflict in Syria that has claimed an estimated half a million lives and displaced over 10 million people. Russia has floated the idea of a Syrian federation as a possible way of putting an end to the bloodshed in the country and preserving its unity.

The emergence of the Kurdish-dominated federal entity in Syria comes amid an intense conflict in neighboring Turkey. Turkish security forces are currently fighting the PKK in what appears to be one of the bloodiest episodes of the decades-long conflict between the two sides.

"Autonomy and self-rule for Syria’s Kurds will embolden the PKK in Turkey further, given its extensive ties to the PYD," Ranj Alaaldin, a Middle East researcher at the London School of Economics and Political Science, told Al-Monitor.

Turkey initially opposed self-rule for Iraqi Kurds in the early 1990s, but gradually came to terms with it. It currently enjoys strong political and trade ties with Iraqi Kurdistan. Yet, it is unclear how it will choose to react to an enhanced and expanded Kurdish-ruled entity in Syria.

Given the presence of Russian forces in Syria and the animosity arising from Turkey's shooting down of a Russian warplane in November 2015, Turkey is not in a strong position to respond to what it perceives as threats coming from Syria.

"Turkey has very limited options. It lacks the capacity to mount an effective military operation and, even if it does go for the gamble, risks confrontation with the Russians, Iranians and the Assad regime," said Alaaldin, who writes regularly on Kurdish and regional affairs. "Turkey is isolated both regionally and internationally, which further complicates matters for [Turkish President Recep Tayyip] Erdogan and his government."

Turkey's relations with the PYD have ranged from lukewarm to outright hostile. Muslim and other PYD leaders have visited Turkey and met with Turkish officials on a number of occasions. In a dramatic turn of events, even though Erdogan anticipated that the Kurdish-controlled town of Kobani would fall to the Islamic State (IS) in late 2014, he allowed the passage by Iraqi Kurdish peshmerga forces to Kobani to assist Syrian Kurds against IS. The PYD and its armed wing, the People's Protection Units (YPG), also facilitated the removal of the Tomb of Suleiman Shah in Aleppo governorate by Turkish forces when it was in danger of being harmed by IS militants.

Turkish leaders have repeatedly warned the PYD and YPG against seizing more territory and at times shelled areas inside Syrian territory controlled by the YPG.

While the circumstances might look quite difficult for Turks now, some argue Ankara's hands are not that tied down in confronting the new federal arrangement in northern Syria.

"Ankara has recently tried to convene dozens of armed Syrian opposition groups in Turkey to unify them against the PYD and the Assad regime," Ragip Soylu, a Turkish journalist from Daily Sabah newspaper, told Al-Monitor. "Turkey already hurts the PYD by enforcing a de-facto embargo along the PYD-held Syrian borders … Turkey has a lot of tools to counter the PYD, but declaration of federalism is not something strategically enough to push Turkey into a tense situation."