Regardless of the partial Russian military withdrawal, it appears that other allies of the Syrian government are holding their ground. 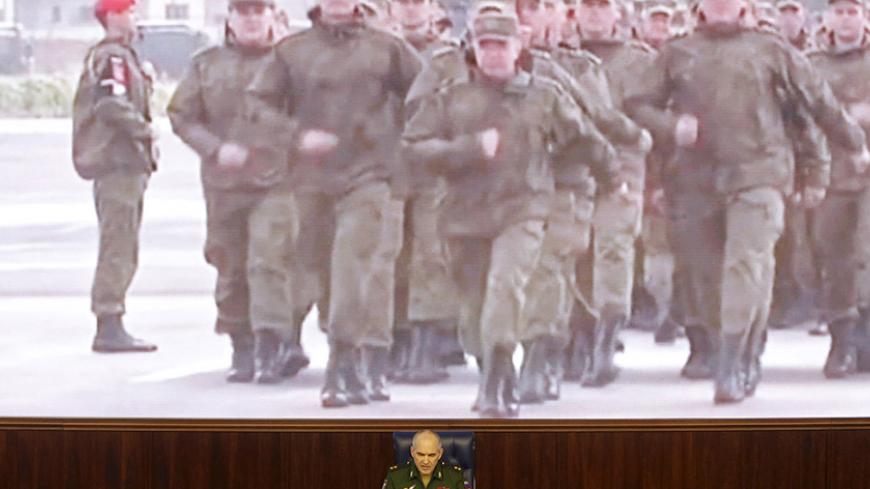 When Russia decided it was time to withdraw the major part of its forces from Syria, the announcement, on March 14, came as no surprise to its allies in the Syrian civil war. The Syrian government, Iran and Hezbollah had been informed in advance. The decision has, however, become a topic of debate among many, especially since the war is ongoing, main objectives have not been achieved, and a solid political path to the conflict's resolution has not been set.

A senior Syrian official told Al-Monitor that Moscow and Damascus had agreed to and coordinated on the partial withdrawal. “The timing was politically driven, and our leadership knew all the details. The Russians ensured us that they are still committed to anti-terrorism operations, and there’s still a joint operation chamber that overlooks operations in areas outside the truce map,” the official said.

“The Russian step will enhance efforts to reach greater reconciliation. It will solidify the truce and help the war on terror and boost the Geneva talks,” the official added. “The Syrian and Russian stances are the same regarding the political and the military path.”

Others were also aware of Russia's plans, claimed a Syrian diplomatic source. “Obama was fully aware of Putin’s decision,” he said. “The Russian president’s move was to strengthen the chances of a political solution and to back Obama’s argument. Iran also was fully aware. I can say that the Iranian, Syria, Russian coordination is at its best.”

An Iranian official speaking on condition of anonymity told Al-Monitor, “The Russians are free to make the decision they feel is best for their vision of the region. There are common goals that the coalition supporting the Syrian government is looking forward to achieving, and there are special objectives each side is working on, objectives that benefit their interests.”

According to the Iranian, there’s nothing that will alter his country’s position on Syria. “Neither the Russian decision nor the political path will affect our commitment toward the Syrian government as long as the war continues,” he said. “Moscow’s decision also is part of their commitment to their allies, but this won’t have any effect on the ongoing operations. The troops and equipment withdrawn aren’t needed in the battle anymore. There’s no need for them, according to what we were told. They even said they’re preparing to send new equipment in the near future.”

It is true that Iran and Russia are in the same camp, but one would have difficulty arguing that they've become full-fledged allies. Even with respect to Syria, each has its own vision with respect to the outcome of the war. Russian officials have on several occasions made it clear that they care more about the Syrian government and status quo than personalities, while the Iranians insist on preserving the role of President Bashar al-Assad, whatever the other options. This might, however, be a matter of semantics, as both have the same goal in the end. Indeed, the Russian military still has a strong presence at the Khmeimim military airport and the Tartus naval base.

On Mar. 7, a week before the announcement of the withdrawal, and one day after Turkish Prime Minister Ahmet Davutoglu visited Tehran, senior Russian diplomat Mikhail Bogdanov arrived in the Iranian capital to discuss the situation in Syria with his Iranian counterpart, Hossein Amir-Abdollahian. According to an Iranian official who spoke to Al-Monitor, the visit was to update the Iranians on the Russian decision. He said, “Our military commanders were aware [of the Russian decision], but there was a need to discuss some details on the political level.”

Davutoglu’s visit to Iran had something of a Russian connection, as both Tehran and Ankara are deeply concerned about Kurdish ambitions in northern Syria. Putin is being called by some the “Godfather” of the newly announced autonomous Syrian Kurdish region, which has brought Turkey and Iran together. The two have put their differences aside over Assad's future and the entire Syrian crisis to discuss Rojava, as the Kurds call northern Syria, which both see as a threat to Syria's unity and an element of destabilization wherever sizable Kurdish minorities reside.

Putin’s announcement of the withdrawal was apparently motivated by an assessment that the six-month military intervention had largely achieved its objective. The move was announced in sync with the start of talks in Geneva between the Syrian government and the opposition under the auspices of the United Nations. The Russian move also came against the backdrop of preparations for a large-scale offensive to take Palmyra, which has been under Islamic State control since May 2015. Indeed, this military campaign has seen new cooperation between the Syrian army, Iran’s Islamic Revolutionary Guard Corps and Hezbollah, operating together under the cover of the Russian air force.

If anything, it appears that the Syrian government's allies are holding their ground. “People started giving their analyses left and right that there will be enormous changes in Syria, and there will be a change in the balance after Russia’s partial withdrawal,” said Naim Qassem, Hezbollah’s deputy secretary-general, at a gathering near Beirut. “The forces that are allied with the Syrian army are capable of protecting their areas and making progress in other areas. Hezbollah will remain on the battlefield as it was before and will not be replaced or be forced to change its plans.”