Putin to Assad: Do svidaniya

Russian President Vladimir Putin is saying "do svidaniya" — goodbye — to Syria, announcing the start of a Russian military withdrawal that Putin said he hoped would bolster Syria peace talks underway in Geneva. 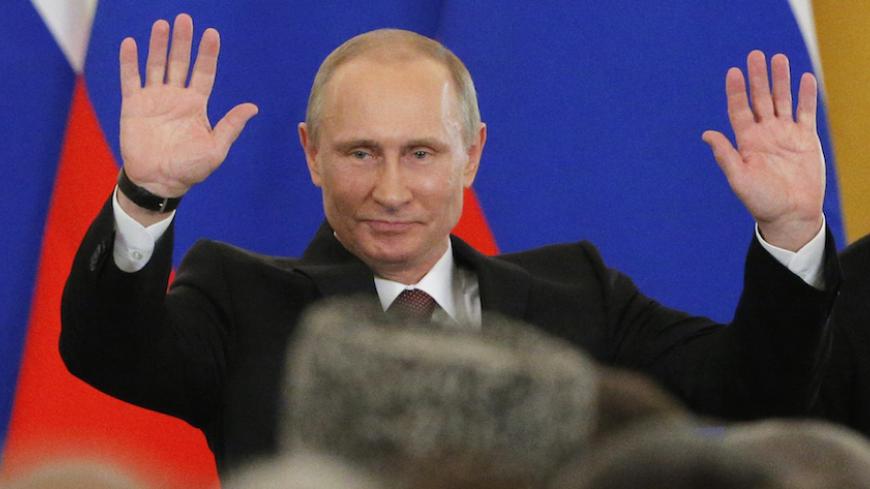 Russian President Vladimir Putin waves to the Federal Assembly after a signing ceremony at the Kremlin in Moscow, March 18, 2014. - REUTERS/Maxim Shemetov

WASHINGTON — In a surprise move that he said he hoped would bolster Syria peace talks, Russian President Vladimir Putin announced that he would start to withdraw most Russian military forces from Syria starting March 15. The decision to partly withdraw from Syria, which Putin said he discussed during a phone call with Syrian President Bashar al-Assad March 14, is likely to put pressure on the Assad regime to negotiate more seriously at UN-hosted peace talks with the opposition, which resumed in Geneva on March 14. The decision follows remarks from Syria’s foreign minister over the weekend that any talk of Assad’s future was a “red line” at the Geneva talks.

“I hope today’s decision will be a good signal for all conflicting parties” at the Geneva talks, Putin said following a meeting with Russian Foreign Minister Sergey Lavrov and Defense Minister Sergei Shoigu on March 14, Russian news agency Itar-Tass reported. “I hope it will sizably increase trust of all participants in the process.”

Putin and Assad, in a phone call initiated by the Russian leader March 14, “discussed the implementation of the joint statement by Russia and the United States … on [the] cessation of hostilities in Syria,” according to a Kremlin readout of the call. “They share the view that the cease-fire has made possible a dramatic reduction in the bloodshed in the country. … It has also made it possible to put in place conditions for starting a peace process under UN aegis.”

“Mr. Putin said that Russia’s armed forces have fulfilled their main mission in Syria and a timetable for the withdrawal of the aerospace forces’ main air grouping has been agreed,” the readout continued. “Russia will maintain an aviation support center in Syria in order to monitor compliance with the cease-fire.”

Putin’s announcement on a partial Syria withdrawal seemed to take US officials by surprise.

“We have seen reports that President Putin has announced a planned withdrawal of Russian forces from Syria,” a senior US administration official told Al-Monitor March 14. “We expect to learn more about this in the coming hours.”

Putin and Obama subsequently discussed the matter in a phone call Monday, the White House said.

“They discussed President Putin’s announcement today of a partial withdrawal of Russian forces from Syria and next steps required to fully implement the cessation of hostilities with the goal of advancing the political negotiations on resolution of the conflict,” a White House readout of the call said. “President Obama welcomed the much-needed reduction in violence since the beginning of the cessation, but stressed that continuing offensive actions by Syrian regime forces risk undermining both the Cessation of Hostilities and the UN-led political process.”

Samuel Charap, a Russia expert at the International Institute for Strategic Studies, said Putin had largely achieved his objectives.

“His objective was to force the US and its allies to the bargaining table on his terms,” Charap told Al-Monitor March 14. “He achieved that objective. Beyond that, an extended, large military presence in Syria doesn't really do much for him. It's more of a liability than an asset.”

But Paul Saunders, a Russia expert at the Center for the National Interest and a contributor to Al-Monitor, said it was also notable that Putin was saying mission accomplished when his original declared rationale for intervening in Syria was to defeat the Islamic State (IS).

“It is striking, and many in … and out of the region will take note of the fact that President Putin said that withdrawal is going to take place because the Russian forces have achieved their objective,” Saunders told Al-Monitor March 14. “Because when they went in, it was framed very much in terms of strikes on [IS]. That mission is not really completed.”

“What has actually been accomplished is this rather tentative temporary cessation of hostilities leading to some kind of successful peace process between Assad and the forces of the opposition,” Saunders said.

Putin “is trying to send a message to both sides,” Saunders said. “Certainly for the Assad regime side, it makes very clear to them that they better actually negotiate seriously.”

But the announced partial withdrawal “does not mean Russia is just walking away,” Saunders added. “The pace of the withdrawal … also provides leverage. It can be slowed, it can be accelerated. Moscow has the continuing leverage that it needs.”

A former Russian diplomat said Putin’s announced decision to partly withdraw from Syria is probably due to a combination of reasons.

“First of all about some deal with US (maybe, on a range of issues regarding transition and Geneva talks) and possibly with the [Kingdom of Saudi Arabia],” the former Russian diplomat, speaking not for attribution, told Al-Monitor. “Then about a master stroke on the first day of ‘resumed’ negotiations … in terms of showing good faith and ‘inviting’ others to reciprocate in their ways. If others take it for weakness and start massive attack on Assad, birds can return. Withdrawal is partial, and infrastructure remains.”

The Syrian opposition, for its part, said it welcomed Putin’s announcement and that serious withdrawal would put pressure on the regime and give peace talks a positive impetus.

“We will not talk to anyone who talks about the position of the presidency,” Moallem said. “Bashar [al-Assad] is a red line; the property of the Syrian people. I advise them that if this is [the opposition’s] thinking, they shouldn’t come to the talks. They must abandon these delusions.”

But UN envoy Staffan de Mistura said tough rhetoric was not unexpected heading into such sensitive negotiations and what mattered more is what is happening inside the rooms.

“There is always, in any negotiations, especially as delicate and important and crucial like this one, a lot of strong statements,” de Mistura told reporters March 14, following a meeting with the Syrian government delegation, which is led by Syria’s UN Ambassador Bashar Jaafari. “We should be talking between us about what will be the outcomes of the discussions and the negotiations — that will be the judgement.”

The agenda at this round of talks was focused on governance, a new Syrian Constitution and new Syrian elections, as mandated by UN Security Council Resolution 2254, he said.

“I don’t know whether anyone else has a plan B here. I am only aware of a plan A, which is giving a maximum of chances and the maximum of pressure [by] the international community to ensure that the Intra-Syrian Talks … is given the maximum of opportunities,” de Mistura said.

The current round of talks is expected to last until March 24, then break for a week or so and then resume, he said.