Syria talks pulled back from brink

UN Syria envoy Staffan de Mistura looked to the United States and Russia for help after the Syrian opposition said it will pause its participation in formal negotiations but stay in Geneva until it sees progress on strengthening the cease-fire and aid access. 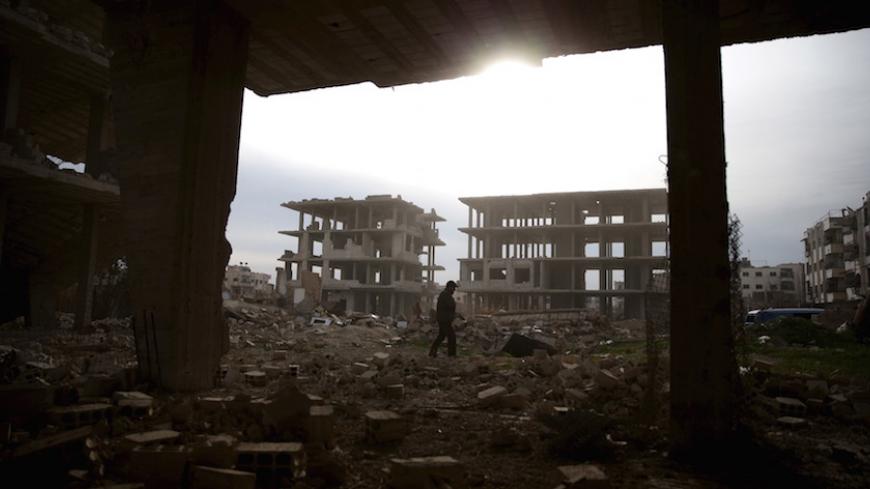 A man walks on the rubble of damaged buildings in the rebel-controlled area of Jobar, a suburb of Damascus, March 2, 2016. - REUTERS/Bassam Khabieh

WASHINGTON — UN Syria envoy Staffan de Mistura, who was clearly frustrated, said April 18 that the Syrian opposition High Negotiations Committee (HNC) informed him they will pause their participation in formal negotiations at the United Nations, but have agreed to stay in Geneva at their hotel and talk with his team, until they see progress in bolstering the partial cease-fire and humanitarian aid access. But de Mistura managed to pull the talks from the brink of collapse, saying indirect talks would continue in Geneva through the week and suggesting the opposition might return to the formal negotiating table if there was demonstrated progress on aid access and shoring up the cease-fire around Aleppo.

After five years of war, it was unreasonable to expect the Syrian opposition and regime delegations to find common ground in just a few days of proximity talks in Geneva, de Mistura said. But despite no demonstrated compromise yet on a vision for Syria’s political future, he said, it was notable that both sides were talking about some version of a Syrian political transition, and it was totally normal that at the early stages of resumed peace talks, the warring parties would stake out maximal positions and show little common ground.

“On the political track, we should not, and no one should, expect that after five years of conflict, a political transition … by one week is solved,” de Mistura, sighing repeatedly, told journalists at the UN in Geneva April 18.

“It is no secret that one side is insisting on implementation of a [transitional governing body], and the other side, the government, have been indicating their interest in launching an initiative for a broad-based [unity] government,” the UN envoy said. “The gap is clearly wide. But this is the nature of the negotiations.”

The Syrian opposition said it was still committed to the political process, but needed to see improvements on the ground.

“Since these talks began in Geneva, the [Bashar al-] Assad regime has worsened the situation on the ground. The progress in Geneva is directly connected to the realities faced by our people in Syria,” HNC spokesman Salem al-Meslet said April 18. “The talks must not be allowed to become a vehicle for regime violence.”

“The HNC remains fully committed to the political process and establishing peace through diplomacy,” Meslet said. “We remain in Geneva ready to engage in serious talks.”

US officials said they believed as of now that the Geneva talks would avoid total collapse and continue until April 22. While there have been increasing violations of the 7-week-old cessation of hostilities, particularly near Aleppo, they said, it was still holding in many areas and more aid was getting through, including more than 50 trucks of aid to three towns over the weekend.

But, they said, the Syrian regime is still pulling medical supplies and some food off the aid convoys and obstructing unfettered humanitarian aid access.

“I think we are going to be able to keep the talks in place till the end of the week,” a US official, speaking not for attribution, told Al-Monitor April 18. “What they get out of this week, wait and see. … It is not going to be easy.”

The pattern that they have seen is that the Syrian regime and its allies are retaliating against minor armed rebel violations of the cease-fire with disproportionate and escalating violence, US officials said.

“We continue to do everything that we can to help solidify the cessation and support the UN-led political process underway in Geneva,” a State Department official said in emailed comments to Al-Monitor April 18.

The Syrian opposition HNC is “rightfully frustrated by the regime’s persistent violations” and “continued obstruction of humanitarian access.”

“President Obama stressed the importance of pressing the Syrian regime to halt its offensive attacks against the opposition,” a White House readout of the call said. “The two leaders committed to intensify their efforts to shore up the Cessation of Hostilities and affirmed the need to end attacks by all parties and ensure humanitarian access to all besieged areas. President Obama also stressed that progress on these issues needed to be made in parallel to progress on political transition to end the conflict in Syria.”

Secretary of State John Kerry would also ask Iran to use its leverage with the Assad regime to support humanitarian assistance and the Geneva process when he meets with Iranian Foreign Minister Mohammad Javad Zarif in New York April 19, the State Department said.

“These talks were never going … to start out with a quick settlement on some of the core issues,” State Department spokesman John Kirby told journalists at the press briefing April 18.

De Mistura “expected both sides to start from positions [that are] very far apart and [that it would] take quite a bit of time to bring them into agreement,” Kirby said. “And obviously that is true. We knew it was going to be hard.”

Former UN official Salman Shaikh, now an international political consultant, said the opposition is frustrated at regime stalling and is under pressure because of the lack of major progress on any front, humanitarian or political.

“The opposition is very upset that there isn’t any movement, even on the humanitarian side, the regime is just stalling and stalling,” Shaikh, with the Shaikh Group, told Al-Monitor by phone from London April 18.

In negotiations, when one “gets to a breaking point, sometimes you get a breakthrough,” Shaikh said. “But at this point, I would not put money on it.”

In his assessment, the Russians are trying to push the Syrian regime to be more cooperative on humanitarian aid access, with limited success, Shaikh said. But the Syrian opposition is also “irked” that the Russians have encouraged bringing other groups of Syrian “opposition” to Geneva, including the so-called Cairo opposition, “muddying the waters,” Shaikh said.

“The regime bottom line is, it is willing to share … ‘some power,’ in a national unity government, that would validate the new constitution, which then leads to new elections, in which Assad can run again,” Shaikh said. “That is what the regime wants.”

“I feel sorry for de Mistura,” Shaikh said. “I think … there has to be a US-Russian understanding to move it forward.”