Will house arrests of Green Movement leaders come to an end?

After an open letter calling on President Hassan Rouhani to end the house arrest of the Green Movement leaders, the administration has been vague about fulfilling this campaign promise. 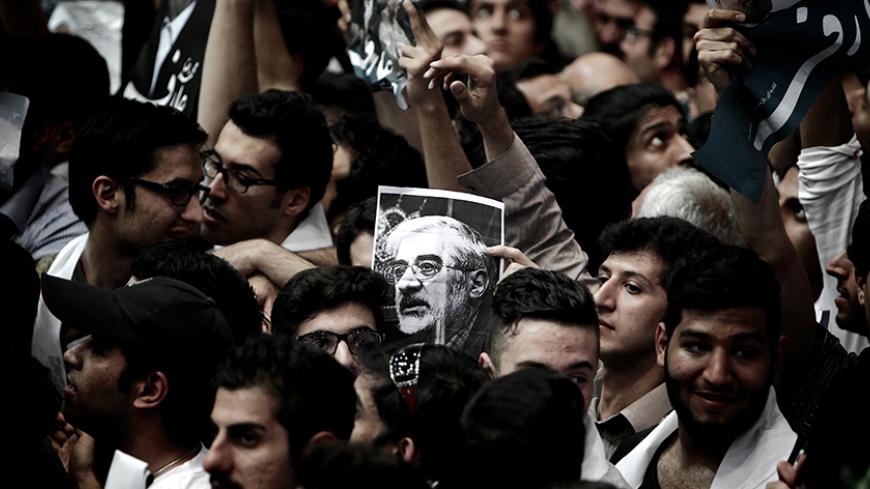 At an April 2013 campaign rally, presidential candidate Hassan Rouhani was asked about the house arrests of the 2009 Green Movement leaders, Mir Hossein Mousavi, Zahra Rahnavard and Mehdi Karroubi. At the time, the Green Movement leaders had been imprisoned for over two years without trial for calling for protests against the contested 2009 presidential elections, which kept the hard-line Mahmoud Ahmadinejad in power.

Rouhani responded to the question by saying, “This condition is not to our benefit. This split, which day by day is becoming deeper, must be eliminated.” He added, “I am hopeful that the elections will decrease the distance somewhat and that the future administration can bring about an atmosphere that is not securitized. In my opinion, it is not a problem for conditions to be brought about one year from now such that not only those under house arrests are freed but that all of those who were imprisoned over the 2009 events will also be freed.”

Since Rouhani took office in August 2013, the issue of the house arrests has been raised by journalists and activists alike. The response by the administration has been always diplomatic and they have hinted that there have been efforts behind the scenes.

The house arrests have once again become the topic of Iranian media after an open letter from perhaps Iran’s most famous and legendary actor, Ezatollah Entezami, calling on Rouhani to end the house arrests. The letter was published on Kaleme, the news website affiliated with Mousavi, on March 16.

“Dear Mr. President, with the accomplishment of one of your campaign promises, you were able to remove the shadow of the ominous sanctions from the people’s head through negotiations and talks,” the letter read. “Isn’t it time to act on your other campaign promises, meaning removing the house arrests?”

The letter said that resolving this issue would add to national trust and unity and asked, “Why are you delaying in accomplishing this promise? … Is it possible to ignore such an important issue and [still] want the solidarity of the people? Ignoring the truth and closing your eyes to it will only make resolving it more difficult. We are talking about national solidarity.”

The letter concluded, “At the end of my long life of 90 something years, I hope that with prudence and wisdom, this issue, like the issue of the sanctions, comes to a happy ending. I have the expectation on the threshold of the New Year [March 20] that you will resolve the issue of the house arrests.”

The administration’s response to the letter has been vague. Rouhani’s chief of staff, Mohammad Nahavandian, when indirectly asked about the letter and the end of the house arrests, said, “Everything must be done on its own time with its own appropriate speed.” (Given that the house arrests are a sensitive security issue, Nahavandian was asked when the president would fulfill his domestic campaign promises.)

The administration has been less vague in the past. In February 2015, when asked about the end of the house arrests, administration spokesman Mohammad-Bagher Nobakht said that while it had made attempts to address the issue, ultimately, “We’re not the final decision-maker on this.”