The recent heart troubles of opposition leader Mir Hussein Mousavi has put the Rouhani administration on the defensive over its progress on the continuing house arrests. 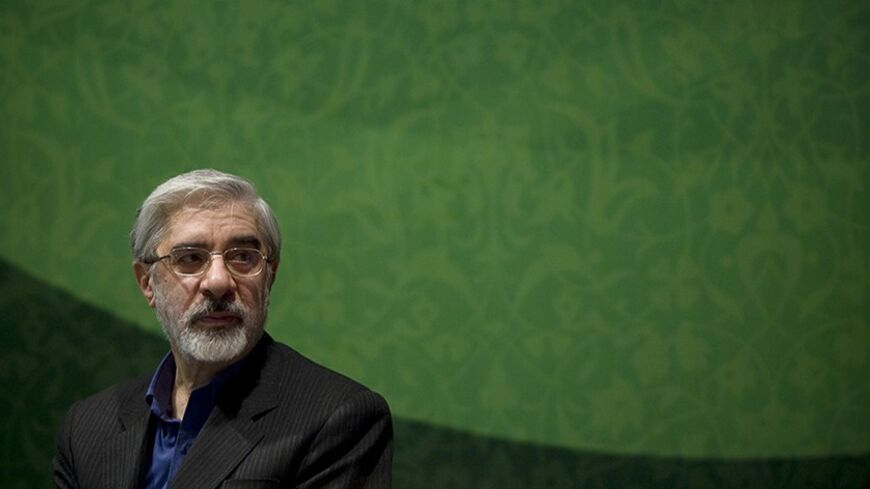 Former Iranian prime minister and presidential election candidate Mir Hussein Mousavi looks on as he speaks to his supporters at an election campaign at a cultural center in southern Tehran, May 30, 2009. - REUTERS/Morteza Nikoubazl
Arash Karami
@@thekarami
April 30, 2014

After reports emerged that one of the Green Movement leaders under house arrest had been checked into a hospital with heart trouble, in separate statements, President Hassan Rouhani and his spokesman defended the administration’s efforts to address the situation of the leaders in detention.

Yesterday, April 29, Narges Mousavi, the daughter of 2009 presidential candidate Mir Hussein Mousavi, tweeted that her father had been admitted to the hospital due to heart trouble. Opposition website Kalame, which is associated with Mousavi, then confirmed the report. Zahra Mousavi, Mousavi’s other daughter, told Kalame that Mousavi began feeling ill last Friday and was finally moved to Tehran’s heart center on Tuesday to undergo an angiography.

Mousavi, his wife Zahra Rahnavard and 2009 presidential candidate Mehdi Karroubi have been under house arrest since February 2011 for contesting the results of the 2009 presidential election. Since coming to office, the Rouhani administration has made statements that it is working behind the scenes to secure their release. In February of this year, Karroubi was finally moved from a Ministry of Intelligence safehouse to his own house to serve the rest of his detention.

In a television interview with Channel One yesterday, Rouhani said, “I have not forgotten anything. Thanks to God, my memory has been and is still good. And I remember well what promises I made and what I should do.”

In the interview, which at times felt like more of a presidential address to the people, Rouhani said, “Some of the issues related to domestic politics, unity and cohesion of factions take time. We all have to help each other and the prepare the conditions. The hastiness of some individuals makes the work harder.”

At a press conference today, Rouhani’s spokesman Mohammad-Bagher Nobakth told reporters that in regard to the house arrests, “If we want to give information about this situation in various interviews, perhaps we will not be helping reach the goals that we have.”

In response to a reporter’s question about what actions the administration was taking over Mousavi’s heart trouble, Nobakht said, “The administration and the president aim to support the citizen rights of all individuals, whether it is individuals that move freely in society or individuals who are in prison.”

“In regard the house arrests,” Nobakht continued, “the administration’s view is not a secret from the people or the media. But pursuing this matter in some aspects is outside the discretion of the administration. Yet this is being done.”

Despite calls from hard-liners, none of the three opposition leaders have yet been formally charged with any crimes. Deputy Speaker of Parliament Mohammad-Reza Bahonar has previously said that one of the reasons the Green Movement leaders continue to stay under house arrest is that none of them are willing to admit that they made a mistake in their claims of fraud in the 2009 presidential elections.