Speeches commemorating Student Day were disrupted across Iran's universities by outcries in support of Green Movement leaders and student activists. 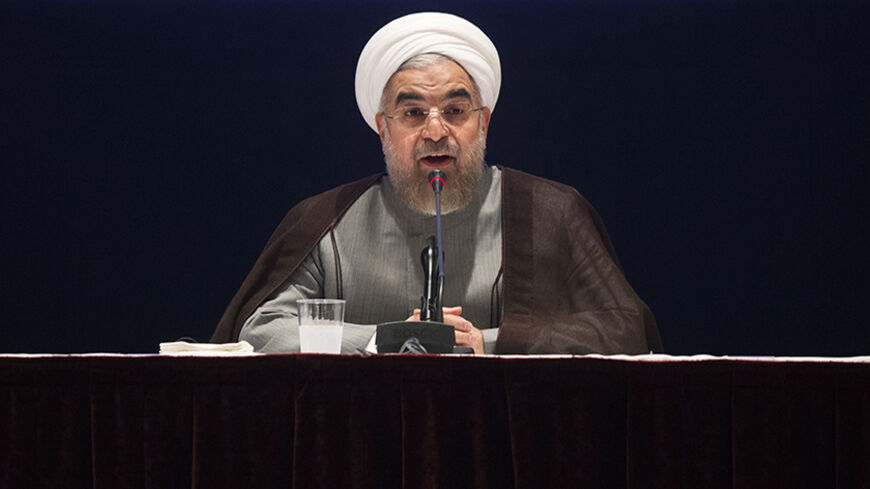 Iranian President Hassan Rouhani’s Student Day speech was interrupted by students chanting in supporting of Iran’s 2009 Green Movement leaders. While Rouhani handled the chants well and attempted to spin them in his favor, his administration faced accusations of cancelling the speeches of conservative figures at other universities.

Student Day in Iran is the anniversary of the 1953 murder of three University of Tehran students under the government of Shah Mohammad Reza Pahlavi. While the day has held various meanings over the years, in the last couple, the day has been mostly used by students to express support for student activists and for Green Movement leaders Mir Hussein Mousavi, his wife Zahra Rahnavard and Mehdi Karroubi, who have been under house arrest for nearly four years.

Short video clips of the students chanting during Rouhani’s speech were shared widely on Facebook, and even some Iranian news agencies published pictures of students holding posters quoting Mousavi’s famous line, “My red line is the rights of the people.” Mousavi has maintained that the results of the 2009 elections were fraudulent.

One of the more popular chants during Rouhani’s speech went, “1,000 days have passed, Mousavi has not returned.” In the linked video, conservative students chant “Death to Mousavi” in response, though they are shouted down by the larger pro-Mousavi crowd.

Another slogan widely shared online was, “Our message is clear, the house arrests must end.” After a round of chanting, a student is heard yelling, “Mr. President, you promised.”

Rouhani told them, “Our oath is not breakable.” The students responded, “Rouhani, we support you.”

Some observers criticized Rouhani for giving his speech at the Tehran University of Medical Sciences, a smaller school not known for activism, rather than the much larger and possibly more politically volatile Tehran University.

Video clips of chants from other universities were shared as well. During a debate at the Iran University of Science and Technology between parliament member Mehrdad Bazrpash and Reformist politician Ali Shakouri Rad, students chanted, “Dear Kianoush, we will continue your path.” Kianoush Asa had been a student there, killed during the 2009 election protests that came to be called the Green Movement.

Rouhani’s administration also faced criticism over the reported cancelation of speeches by conservative figures on Student Day. In response to the cancelations, the president of the Student Basij Organization told Rouhani, “Eliminating your opposition is not deserving of an administration whose slogan is moderation,” and said that claims that the administration "accepts criticism" is nothing more than a “gesture.”

Two of the most prominent speakers to have their talks canceled were hard-line parliament member Hamid Rasaei and Hossein Shariatmadari, the editor of Kayhan newspaper, which operates under the supreme leader’s office. In Iran, the universities operate under the purview of the Science Ministry, which itself is managed by the administration. University officials, however, said that the speeches had never received the necessary permits to go on.