Ali Motahhari's speech on the parliament floor was cut short by his fellow parliament members after he made statements in support of ending the house arrest of the Green Movement leaders. 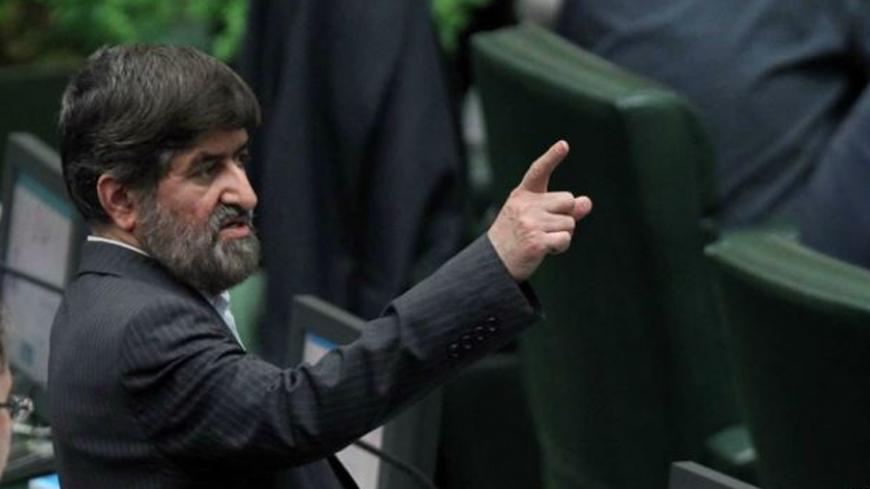 Conservative Iranian parliament member Ali Motahhari was physically confronted and prevented from finishing his speech during a session of parliament over statements he made in support of ending the house arrests of the 2009 Green Movement leaders.

During his Jan. 11 speech, Motahhari, who has a history of making controversial comments and has even recently said that he disagrees with Supreme Leader Ayatollah Ali Khamenei’s position on the issue, has in recent months championed the cause of ending the detention of Mehdi Karroubi, Mir Hossein Mousavi and his wife, Zahra Rahnavard, who have been under house arrest for nearly four years for challenging the results of the 2009 presidential elections.

A brief video of the altercation was later published, but according to the complete audio file, when Motahhari said on the parliament floor that the continuation of the house arrests without charge or judicial proceedings is against the law, other members of parliament began to shout him down, chanting “Death to the sedition.” “The sedition” is the term critics use to refer to the Green Movement.

Deputy Speaker Hossein Abutarabi Fard, who was running the parliamentary session, interrupted Motahhari and told him, “You’re aware of the reality of the country, and what happened to these individuals is Islamic mercy.” Other officials have threatened that if the Green Movement leaders were ever tried in court, they would receive the death sentence.

Motahhari responded that he had two minutes left and it would be time for the deputy speaker to speak afterward, but Abutarabi Fard said, “Your speech is unsettling order in parliament.”

Abutarabi Fard allowed Motahhari to continue, but as soon as he began criticizing the judiciary, according to various reports, members of parliament began to approach the podium. In the audio file, the chants become louder, as if the parliamentarians came closer.

A short video clip was later published, showing Motahhari surrounded at the podium. In the grainy video, there is shoving while others attempting to hold the parliament members back. The edited video shows Motahhari pushing them away from the podium, though it is not clear what happened before or after the push.

The story made the front pages of a number of Reformist newspapers. A number of conservative media outlets attacked Motahhari after the incident. Hossein Shariatmadari, editor of Kayhan newspaper, wrote that Motahhari has forgotten that there are numerous documents showing the Green Movement leaders “were directly managed by America, Israel and England with the goal of overthrowing the system.”

Motahhari says that he voted for conservative candidate Mohsen Rezaei in the 2009 elections, but has previously said that keeping the Green Movement leaders under house arrest has incurred costs and damage to the Islamic Republic.

There is speculation as to why Motahhari has so much room to speak so boldly on a highly sensitive matter that many top officials consider a national security issue. He is the son Ayatollah Morteza Motahhari, one of the key figures in establishing the Islamic Republic. He is also a conservative on social issues and has criticized the Rouhani administration over its supposedly lax approach to the issues of hijab and women wearing leggings as pants.