The tumbling turban: Who is behind attacks on Reformists in Iran?

Protesters have disrupted a number of speeches and gatherings by Reformist groups in Iran, indicating some of the candidates could have a tough time in the upcoming elections. 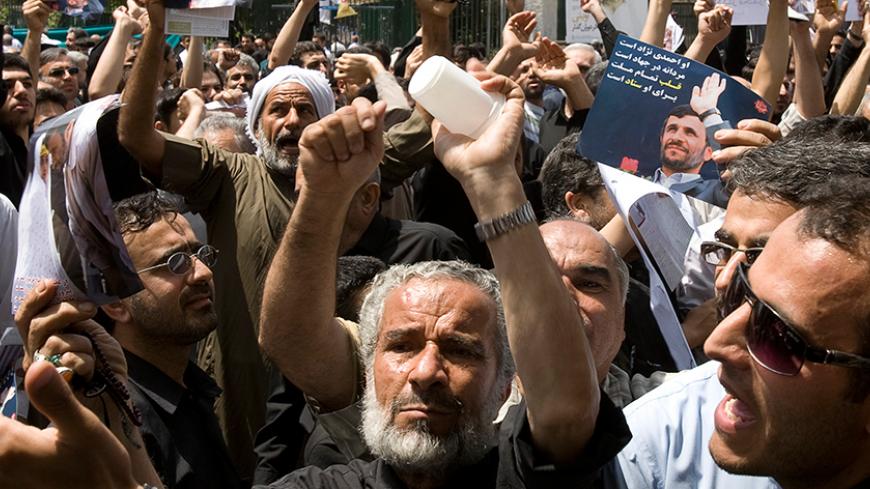 As Iran’s disparate political entities begin to lobby and organize for the 2016 parliamentary and Assembly of Experts elections, attacks on Reformist gatherings portend a challenging path for a decimated group that hopes to return to power.

A significant factor in the election of moderate President Hassan Rouhani in 2013 was the overwhelming support he received from prominent Reformist figures. While many of them supported Rouhani in hopes of ending the policies of Mahmoud Ahmadinejad — by denying hard-line Saeed Jalili the presidency — others hoped to enter political office themselves, taking advantage of Rouhani’s election promise of a more open political climate. However, attacks on Reformist gatherings by protesters appear to be dashing these hopes.

The most recent attack occurred Nov. 29 at a university in Yasuj. Azar Mansouri, a former adviser to President Mohammad Khatami and a Reformist political activist with the Participation Front, was scheduled to speak. According to organizers, they had received permission from both the university and the city to hold the event, but conservative groups from other universities filled the auditorium early, preventing others from entering. When Mansouri entered, the conservative groups began chanting “Death to seditionists,” a term used against Reformist organizers who supported Mir Hossein Mousavi in the highly contested 2009 presidential elections. “The sedition” is the term critics use to refer to the Green Movement.

One organizer of the event described the disruption as “being attacked from three sides.” Unable to deliver her speech, Mansouri left. Three people were injured when one of the protesters pulled a knife on the group accompanying Mansouri.

On Nov. 21, a scheduled speech by former Reformist parliamentarian Mostafa Kavakebian was canceled after about 100 people calling themselves Hezbollah Nation protested. The protesters had warned of a repeat of the “Shiraz event,” referring to a March incident in which outspoken Iranian member of parliament Ali Motahari was physically attacked by plainclothesmen in Shiraz. Motahari has been a vocal advocate of ending the house arrests of 2009 presidential candidates and Green Movement leaders Mehdi Karroubi, Mousavi and Mousavi's wife, Zahra Rahnavard.

Another attack on the Reformist gatherings occurred Nov. 19, when Hojat al-Islam Abdolvahed Mousavi Lari, Khatami’s former interior minister, was physically attacked in the city of Varamin. As he entered an auditorium to give a speech, conservative groups began chanting slogans and some physically confronted him, knocking the cleric’s turban off his head. According to reports, three people were injured in the attack and one person is still hospitalized.

While local authorities have promised to investigate the events, these types of attacks by protesters are rarely prosecuted.

The attacks also signal that Reformists with links to the Khatami administration haven't yet created the right climate for their political comebacks.

Moderate and other Reformist politicians who hope to run the parliamentary elections and break parliament's conservative dominance must also pass through the hard-line Guardian Council, a 12-member body that reviews candidates and laws for approval.