Behind the recent turmoil in Iran’s parliament

The turmoil in Iran's parliament stems from concern about the 2016 parliamentary and Assembly of Experts elections. 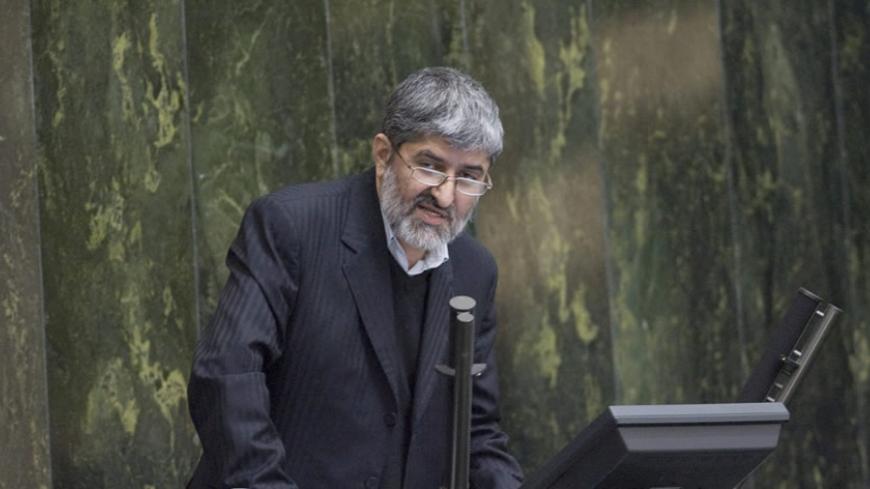 Iran’s parliamentary session descended into chaos during the Jan. 11 speech of Ali Motahari, the outspoken member of the Iranian parliament. Despite his political identification as a conservative, Motahari reiterated his view that the ongoing house arrest of the Reformist leaders of the Green Movement, who have been confined since February 2011, “is in violation with many principles of the constitution.” In response, several lawmakers reportedly shouted “death to seditionists,” and approached the podium in an attempt to physically remove Motahari.

The issue that Motahari raised is one that few political figures — both Reformist and conservative — have an appetite to confront, given the consequences of doing so. In August 2014, Supreme Leader Ayatollah Ali Khamenei warned President Hassan Rouhani and other officials that “issues pertaining to the sedition [mass protests after the disputed 2009 presidential elections and the emergence of the Reformist Green Movement] and seditionists are a red line that officials should adhere to.”

Nevertheless, the Jan. 11 event was not an isolated incident. From every corner of the conservatives’ camp — political and military figures, newspapers and websites — attacks on the Green Movement and its supporters has suddenly intensified. This is despite the movement's dormancy since the June 2009 mass street protests, and some sporadic moves afterward, which eventually capitulated in 2011. The question must be asked then, what can explain the increasingly powerful attacks on a movement that, according to conservatives themselves, “is dead”?

The explanation is the conservative belief that moderates and Reformists, who shaped the backbone of the Green Movement, are poised to take over the next Majles (parliament) and the Assembly of Experts, which, according to the constitution, is tasked with electing the supreme leader if the incumbent passes away. The elections of the Majles and the Assembly of Experts will take place in March 2016.

In a December 2014 article titled “Seditionists dreaming to come back to power,” Basirat — the website affiliated with the Political Office of Iran's Revolutionary Guard Corps (IRGC) — argued that “the June 2013 elections and the coming to power of the 11th [Rouhani’s] administration should be considered as the beginning of the operationalization of the scenario of the return to power of those who are accused of sedition.” After highlighting the activities of the moderates and Reformists, the article concluded that these activities were the manifestation of the seditionists’ aim to win “the 10th parliament and fifth Assembly of Experts.”

Between 2000 and 2004, conservatives were sidelined while two branches of the government, the executive and legislative (Majles), were controlled by the Reformists.

A few months ago, Ayatollah Ahmad Jannati, the head of the Guardian Council that vets the candidates for presidential, parliamentary and Assembly of Experts elections, maintained, “Those who took over the first stronghold [implicitly pointing to Rouhani’s election] have plans to occupy the Assembly of Experts and Islamic parliament … to pursue their corrupt goals in this way.”

Ayatollah Khamenei’s representative in the IRGC, Ali Saeedi, warned on Dec. 30, 2014, about the seditionists’ plans for the parliamentary and Assembly of Experts elections and said, “The principles of the sedition view persists and just the actors change. How votes are cast is a divine trust. … [Therefore] voting is a heavy responsibility on the people.”

One indication that the conservatives view it as an attempt by their rivals to return to power is their activities aimed at activating the political parties.

In the aftermath of the contested elections in 2009, practically, political parties ceased to exist. Prior to the 2009 upheavals, the overwhelming majority of political parties belonged to the moderate and Reformist currents.

Conservatives argue that the ban on those parties’ activities has deprived their opponents of having a “structured organization” and “decision-making centers.” They point to the reactivation of several parties, including the National Trust Party; Association of Combatant Clerics, chaired by the former Reformist President Mohammad Khatami (not to be confused with the Combatant Clergy Association, which is a conservative political party); Servants of Construction Party, founded by Iran’s former moderate President Akbar Hashemi Rafsanjani; and the newly formed Voice of Iranians party, guided by the leadership of Sadegh Kharazi, a former diplomat and adviser to Khatami as part of their rival camp’s efforts to regroup.

On Jan. 15, conservatives’ speculations were realized. On that day, Iranian Reformists held their first public meeting since June 2009 to press their political comeback. The gathering was organized by the Council for Coordinating the Reformist Front, a coalition of some 20 parties, which brought together about 200 delegates to discuss and draw up plans for the front’s future course of action.

“Our objective must be to wrest the majority in parliament. We have no other choice. We must set aside differences that threaten to weaken us,” said the Reformist presidential candidate Mohammad Reza Aref, who withdrew in favor of Rouhani in 2013.

Due to concerns of radical elements disrupting the gathering, Rafsanjani and Khatami did not attend the meeting, opting instead to send messages. In his opening statement, Rafsanjani emphasized “the necessity of existence of political parties” as proof of the system’s commitment to the “republicanism order.”

These statements, among others delivered in the gathering, validate the concerns of the conservatives and explain the reason behind their heightened opposition toward the Reformist/moderate Green Movement.

Undoubtedly, as the 2016 elections inch closer, the struggle over conquering the two houses will only deepen. Given this struggle, the dilemma before the conservative Guardian Council stands as such: If they qualify the candidates who are leaning toward the moderates and Reformists, conservatives may lose control over both houses. Yet, if they disqualify those candidates, resistance may appear on two fronts: the grassroots supporters of the moderates and Reformists, and a president who has proven that he does not fear confrontation with his opponents and puts differences in the spotlight of Iran’s domestic politics.

Maybe Iran’s supreme leader will interfere as he did in the 2013 presidential elections to settle the quarrel.

To the surprise of the overwhelming majority of observers who predicted that Rouhani had no chance and who argued that the votes would be rigged, he won the 2013 elections in the first round. Many observers inside Iran believe that the supreme leader’s statements immediately following the elections — “these votes are hagh al-naas [the people’s rights],” reiterating the importance of protecting people’s rights under Sharia — played a major role in the surprising outcome of the elections. After all, nobody in Iran’s system would want another 2009 episode.