Morocco’s decision not to host the Arab League summit has unexpected implications for Israel. 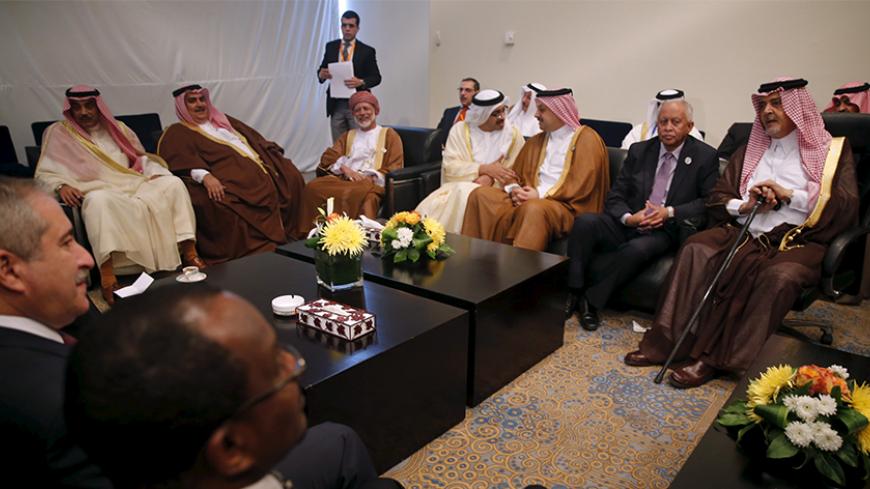 Arab foreign ministers speak together before meeting ahead of the Arab League Summit in Sharm el-Sheikh, south of Cairo, March 26, 2015. - REUTERS/Amr Abdallah Dalsh

The news of Moroccan King Mohammed VI’s decision not to host the 2016 Arab League summit passed under the radar of Israeli politicians and media. Seemingly, it is an internal Arab issue. Why would Israel care that the Moroccan Foreign Ministry thinks there’s no point in another banal event to analyze the “bitter situation of divergences and divisions” among members of the Arab League? So what if Morocco thinks it would be a waste of time to hear speeches “that give a false impression of unity” and make meaningless reaffirmations of prior decisions? What does it have to do with us Israelis? Well, it does have something to do with us. More to the point, it should have had to do with us.

One of those prior decisions brought forward for reaffirmation at such Arab League summits is the one approved at the 2002 meeting in Beirut accepting the Saudi-brokered Arab Peace Initiative. The resolution on the initiative has been reaffirmed at every summit since, calling for peace and normalization with Israel in exchange for withdrawal from territory occupied in 1967, the creation of a sustainable Palestinian state and a just and agreed-upon resolution of the refugee problem on the basis of UN Resolution 194. Although no Israeli government over the past 14 years has even bothered to hold a debate on the initiative, the summit has nonetheless reconfirmed it year after year. Also of note, the Organization of Islamic Cooperation has never retracted its decision to adopt the initiative.

The loss of faith in an opportunity to revive bilateral negotiations with the Palestinians under the leadership of President Mahmoud Abbas has once again made a regional approach fashionable, after it first emerged at the Madrid summit 25 years ago. Usually, suggestions to invite the leaders of “moderate” Arab nations to join Palestinian leaders around the negotiation table are accompanied by plans to duplicate the 2005 unilateral disengagement from the Gaza Strip.

At the diplomatic conference of the Labor Party last month, Chairman Isaac Herzog presented the idea of convening a “regional security summit.” According to him, such a gathering could bring about regional cooperation, isolate Hamas and the Islamic State (IS) and address the problem of Gaza. Herzog said, “Only separation between us and them [the Palestinians] would encourage moderate Arab nations to come talk with us about regional cooperation.”

In June 2015, Yair Lapid, chairman of Yesh Atid, had suggested a regional conference as an alternative to bilateral talks with the Palestinians. “The only way to achieve the two-state-solution is to give up on direct talks and manage the negotiations through a regional conference supported by the United States,” claimed Lapid. “If today there’s no proposal on the table that the two sides could accept, we should turn to the Arab League … to create a regional summit. … There is no Palestinian leader — and there won’t be one in the foreseeable future — who could delve into the necessary compromises. On the Israeli side, too, a commitment to the principle of two states is currently declared only with weak language.” Like Herzog, the former minister of finance suggested that in tandem with the regional process, Israel should begin a process of unilateral separation from the Palestinians.

A year before that, in June 2014 at a conference in Herzliya, Avigdor Liberman, leader of Yisrael Beitenu, had said, “What’s most important to Israel is not to be an isolated island of growth, but to create alliances and dialogues. But here in this region we are an isolated island, and today there’s a big opportunity to establish a regional agreement.”

In his scenario, Liberman, then the foreign minister, went so far as to envision including Kuwait, Qatar and Saudi Arabia in a regional arrangement. “The fact that we could get on a plane and fly to Riyadh or Doha, it would be a totally different reality,” he said. “It’s much more important to achieve agreement with those nations, and the agreement with the Palestinians must be only part of it.”

Prime Minister Benjamin Netanyahu isn’t missing from the list of regional peace advocates. In May 2015, he said that Israel’s common interests with Arab nations against Iran “create opportunities to advance alliances and perhaps even advance peace.” Even earlier, in July 2009, Netanyahu had called on Arab nations to advance the Arab Peace Initiative to achieve a comprehensive, regional peace. On that occasion, an event commemorating Egypt's National Day at the Egyptian ambassador’s residence in Herzliya, Netanyahu also said that he was pleased with relations between Israel and Egypt, “but I think we could take them even further. We’ll work to reach regional peace soon.” In the meantime, Netanyahu worked to advance the construction of thousands of housing units in the West Bank, thus sabotaging the chances of creating a sustainable Palestinian state and realizing the Arab Peace Initiative.

The cancellation of the Marrakesh summit is sad news for those Israelis who recognize the unique opportunity in the Arab League’s peace initiative. The king of Morocco’s unusual decision symbolizes the erosion of the Arab League's status since the Arab Spring. The internal conflicts within the Arab and Muslim worlds around the war in Syria, the strengthening of IS and the instability in Iraq, Libya and Yemen have pushed the Palestinian problem to the margins of the Arab and Muslim agenda. In contrast, the “there is no partner for negotiations” camp, for whom the Arab Peace Initiative represents a threat to the Israeli-Palestinian status quo, can breathe a slight sigh of relief.

The downfall of the Arab Peace Initiative has many authors: Israeli leaders, who clung to the paradigm of bilateral feet-dragging (stalling any advancement toward a renewal of talks); Palestinian leaders, who sacrifice the public interest to sustain the Palestinian Authority; the international community, which doesn’t dare to think outside the old diplomatic box; and Arab countries, which have failed at marketing their initiative to the Israeli public.

Seven years ago, in July 2009, Bahraini Crown Prince Salman bin Hamad Al Khalifa published an op-ed in the Washington Post titled “The Arabs Should Talk with the Israelis.” He argued, “In order to achieve peace, we should do more.” There is nothing left but to hope that the road there remains open.