Why is Hariri back in Lebanon?

There is much speculation about why Saad Hariri has returned to Lebanon, including that he plans to help elect a president so he can head a new Cabinet and save himself politically and economically. 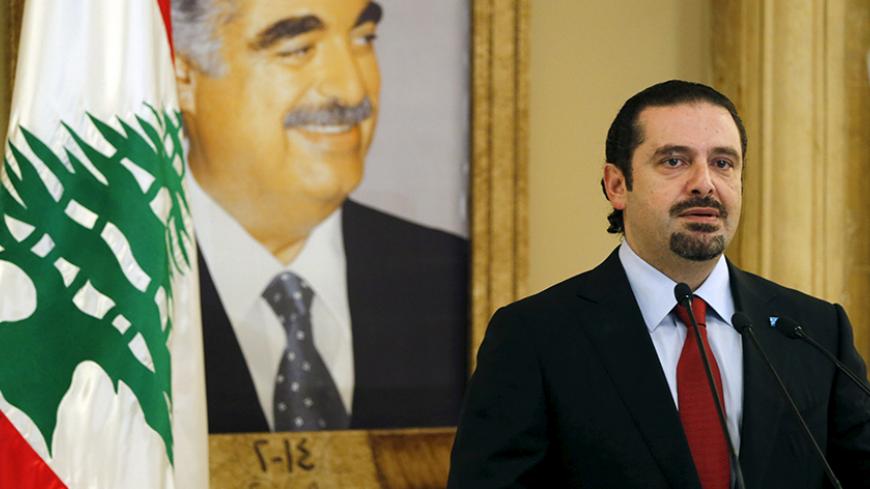 BEIRUT — After a five-year absence that he spent in France and Saudi Arabia, former Future Movement head and Prime Minister Saad Hariri returned to Lebanon in February for a ceremony commemorating the 11th anniversary of Rafik Hariri’s assassination on Feb. 14. He then announced that he will stay in Beirut.

In January 2011, 11 ministers — a third of Hariri’s Cabinet — resigned, leaving a caretaker government under Article 69 of the Lebanese Constitution. The article stipulates that the government shall be considered resigned if it loses more than a third of its members specified in the decree of its formation.

The resignation included 10 opposition ministers, including the ministers of Hezbollah, the Amal Movement and the Change and Reform Movement, in addition to Adnan Sayyed Hussein, a minister aligned with then-President Michel Suleiman. The resignation came as the Special Tribunal for Lebanon was preparing to issue an indictment implicating Hezbollah in Hariri’s assassination.

Making the situation worse, Hariri rejected a call for an emergency Cabinet session to discuss the expected indictment while awaiting the outcome of Saudi-Syrian monitoring of the dispute between the March 8 Coalition, which demanded that the government stop cooperating with the tribunal, and the March 14 Coalition, which supports the investigation.

After Hariri left Lebanon, the Future Movement reported he had received threats. Since then, Hariri has visited Lebanon only twice: the recent trip to commemorate his father’s assassination, and one in August 2014.

Several Lebanese media reports linked Hariri’s visit to different issues, including the extensive financial crisis he is facing. The French Le Point reported the 56,000 employees of his construction firm, Saudi Oger, haven't been paid for months.

Other reports speculated that Saudi Arabia abandoned him because, occupied with its own financial crisis, the kingdom couldn't afford to bankroll his business as well. Still other reports implied his return reflects a Saudi decision to confront Hezbollah via Hariri, as the key Sunni leader. Yet no one seems to rule out that problems within the Future Movement might have necessitated his return, in an attempt to restore Sunni leadership.

In an interview with Al-Monitor, Future Movement parliament member Ammar Houri said, “The security risks that prompted Hariri to leave Lebanon still exist. Yet the constitutional, political, security and economic risks have, altogether, formed the key motive for his return.”

Houri refused to link Hariri's return to the rumored Saudi financial crisis. He said, “Raising this issue from this perspective is not objective. Some crises were resolved and others are approaching a solution. Besides, the talk about a Saudi financial crisis is no more than [a rumor], because Saudi Arabia has enough [financial] reserves to last for decades.”

Houri did not deny that the March 14 Coalition must be reunited. "The coalition’s parties have differences, but the coalition’s situation remains better than that of the March 8 Coalition,” he said, adding that he doesn't even remember the last time the opponents met.

He added, “Hariri is still No. 1 in command of the Sunni street, and there is almost an absence of a No. 2 in command.” Houri did not dwell on the differences within the Future Movement, particularly with resigned Justice Minister Ashraf Rifi. He limited the cause of the disagreement with Rifi to the decision to resign.

Moreover, Houri said he doesn't believe the speculation that Hariri returned to spearhead a confrontation with Hezbollah for Saudi Arabia. He said, “Hezbollah alone bears the responsibility for the Gulf and Arab campaign labeling it as a terrorist organization. It is the one that started the attack on Saudi Arabia and the Gulf states two years ago.”

Based on that position, Houri rejected the idea that the Saudi decision to cancel the grant was designed to sanction Lebanon and its military. He said that Hezbollah alone is to blame.

However, Change and Reform bloc parliament member Hikmat Dib told Al-Monitor, “There are no prospects for Hariri in Saudi Arabia, which is clearly going through a severe economic crisis. The Saudi decision to halt the grant to the Lebanese army is only a way to secure liquidity, particularly since Hariri is harmed the most by the halt of the Saudi grant.” Hariri is so closely linked with Saudi Arabia in the minds of the Lebanese that the loss of the grant is seen as a failure on his part.

Dib concluded, "The objectives of Hariri’s return are the presidential elections and formation of a new Cabinet that he will be heading, which will save him politically and economically.” He noted that Hariri’s access to the post of prime minister is linked to Marada Movement leader Suleiman Franjieh gaining the presidential post — which explains Hariri’s nomination of Franjieh for the presidency.

He added, “The Future Movement is going through a crisis due to lack of funding and liquidity, which became clear when Hariri toured a number of Lebanese areas and attended meetings that he collaborated on with his political opponents,” such as former Minister Abdel Rahim Murad. Dib added that in his view, “Hariri’s return was inevitable."

Dib and Houri rejected the idea that​ Saudi Arabia placed the Future Movement in a direct confrontation with Hezbollah through Hariri’s return. Dib said, “Saudi Arabia is not on good terms with Hezbollah, but had it been really interested in confronting it, it would not have canceled its grant to the army, particularly since it was based on the idea of strengthening and providing weapons to the army in the face of Hezbollah.”

According to Dib, the Lebanese-Saudi crisis is due to “the change brought about by the Saudi leadership, which is not close to Hariri. It moved in new directions concerning its ties with Lebanese Sunni figures by hosting some of their opponents.” He added, “Hariri means nothing to the Saudis on the political level. Besides, they are not interested in Lebanon’s card to the extent that some may think.”

Lebanon does not seem to be approaching a radical change anytime soon, particularly since the latest session that tried to elect a president, on March 2, was just as unsuccessful as the dozens of previous attempts.

Will Hariri's return lead to a breakthrough at the presidential level, through Franjieh, in the face of the Christian understanding between the largest two parties, the Lebanese Forces led by Samir Geagea and the Free Patriotic Movement led by Michel Aoun? Or is filling the presidential vacuum dependent on a wider regional solution?