A court's decision to put Michel Samaha back behind bars might help ease Sunni-Shiite stress, but solving sectarian differences will require everyone's cooperation. 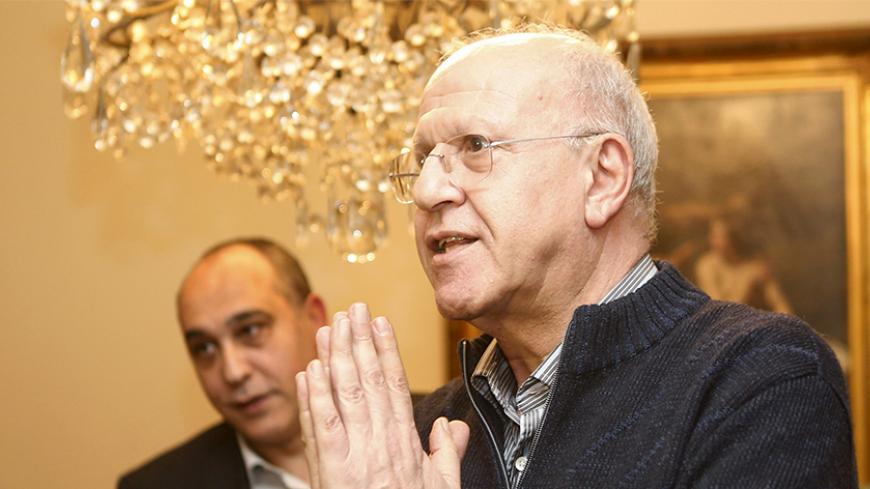 Former Lebanese Information Minister Michel Samaha gestures at his house after being released in Beirut, Lebanon, Jan. 14, 2016. He has since been returned to prison. - REUTERS/Mohamed Azakir

Michel Samaha, Lebanon's former information minister, is back in prison and even his onetime supporters don't seem to mind much, as rival parties appear to be making some progress on the political front.

Samaha, known for his close ties with the Syrian regime, was arrested Aug. 9, 2012, on charges of transporting explosives from Syria to Lebanon in his own car and planning to assassinate Lebanese political leaders. In the investigations, Samaha reportedly mentioned that the targets were high-ranking figures. In February 2013, Military Judge Riad Abu Ghida had even recommended the death penalty for Samaha and Syrian Maj. Gen. Ali Mamlouk, one of the main pillars of the Syrian security regime.

When Samaha was finally sentenced last year, he received a 4½-year term. The decision infuriated the Sunni community, as Samaha had been found guilty of planning to execute a Syrian regime-orchestrated plot to trigger sectarian strife in Lebanon. Amid sectarian tensions between Sunnis and Shiites that had reached a peak in Lebanon and in the region, his sentence triggered a barrage of objections, especially among the March 14 Alliance, a coalition of political parties that opposes both the Syrian regime and the regime's Shiite ally, Hezbollah.

A retrial was quickly ordered. Pending the do-over, the Military Court of Cassation released Samaha on bail Jan. 14 — which of course did not go over well, either. But by April 8, the court had rendered an irreversible sentence totaling almost 10 years with hard labor and stripped Samaha of his civil rights. (The official sentence was 13 years, but under Lebanese law, a prison year only equals nine months.)

It seems that the court's final decision might have been intended to contain the Sunni fury caused by the decision to grant Samaha bail.

But why haven't Samaha's supporters objected to his sentence — especially those who had shown solidarity with Samaha when he was first arrested in 2012? Those supporters, led by Hezbollah, included parliament member Mohammad Raad, the head of Hezbollah's Loyalty to the Resistance parliamentary bloc, who praised the decision to release Samaha.

But the voices that once supported Samaha are muffled. Even Jamil al-Sayyed, one of the most hard-line figures in the Axis of Resistance — the anti-West alliance between Hezbollah, Iran and Syria — and within the ranks of the March 8 Alliance, has nothing good to say. Sayyed tweeted Jan. 15, a day after Samaha’s release, “Michel Samaha betrayed my trust and erred against me when he accompanied me from Damascus with him knowing what he was hiding in his car.” Sayyed reaffirmed that stance in another Twitter posting April 8, the day the court handed Samaha his prison term.

It appears that the irreversible decision came against the backdrop of uninterrupted bilateral dialogue sessions between the Future Movement Party (part of the March 14 Alliance) and Hezbollah (part of the March 8 Alliance) that started in December 2014. The dialogue has been ongoing despite the political sparring between Future Movement and Hezbollah over the war in Syria and the emerging crisis with Saudi Arabia; the next session is scheduled for May 10. Two items on the agenda are easing sectarian tensions and finding a solution to the two-year presidential vacuum.

One of the outcomes of this dialogue so far is Minister of Interior and Municipalities Nouhad al-Machnouk's rejection of the Arab Interior Ministers' decision March 2 to brand Hezbollah a terrorist organization.

An equally important outcome was the indirect call by head of the Future Movement, Saad Hariri, for Hezbollah Secretary-General Hassan Nasrallah to meet him halfway on a political compromise. Hariri issued the call during a March 10 television interview on Kalam al-Nas, a live political talk show on the Lebanese LBC satellite channel.

Hariri's opening up to Hezbollah was reflected by his nomination of Suleiman Franjieh — one of the leaders of the March 8 camp and a close ally of Hezbollah — as Hariri's candidate for the Lebanese presidency.

Samaha's case has cast its shadow over the Future Movement and was one factor in a sharp divergence of views among its poles. The most prominent display of this disagreement was the Feb. 20 resignation of Minister of Justice Ashraf Rifi (who objected to Samaha's release) over Hezbollah's increasing influence in the government.

The Sunni public views Rifi as a leader rather than a minister, and his resignation raised their ire, while Hariri posted on Twitter that the resignation of Rifi does not represent his own position.

The divergence within the Future Movement ranks escalated to the point of division. Ghattas Khoury, a Hariri adviser, said in an April 10 television interview on the MTVLebanonNews channel, “There are currently no efforts for any meeting between [Hariri] and [former] Minister Rifi.”

There is no doubt that the recent court decision lends credibility to Hariri’s strategy of not resigning from the government and continuing the dialogue with Hezbollah, which allowed him to obtain a fair judicial decision that shows no leniency, contrary to the release decision, and avoid Hezbollah’s obstruction.

Michel Hajji Georgiou, a political activist and journalist at French-language daily L’Orient Le Jour in Lebanon, spoke with Al-Monitor about Hezbollah’s silence following the court's recent decision and the waning solidarity with Samaha.

“The main reason that pushed the Axis of Resistance, represented by Hezbollah and its allies, to turn its back on Samaha is the embarrassment that the latter has caused to the resistance in particular. This was the first time [anyone] was caught red-handed moving explosives in his car from Syria to Lebanon, and this is the first time that evidence has been revealed about the involvement of Maj. Gen. Ali Mamlouk, which directly implicates the Syrian regime.”

Although the court's recent sentence putting Samaha back behind bars may yet defuse the Sunni anger, some contentious matters are much bigger, not the least of which is Hezbollah’s fighting alongside the regime in Syria, its involvement in the Yemeni war and its campaign against Saudi Arabia and the Gulf states.

Samaha’s return to prison could be a palliative to save the dialogue between the Future Movement and Hezbollah, and to cut off the way to “hawks” such as Rifi.

Rifi decided to resign when the government did not approve to defer the Samaha case to the Judicial Council (the highest court) after the Military Court decided to release him. He accused Hezbollah, among many others, of obstructing such a referral and consequently refused to stay in a government at the mercy of Hezbollah.

Samaha was politically and socially executed by both the rival March 8 and March 14 camps. Sending him back behind bars is a mere moral gain for the Sunnis. Easing the sectarian tension between Sunnis and Shiites will require much more.