Hezbollah's actions are isolating Lebanon from the Arab states and exacerbating the country's already fractured and paralyzed politics. 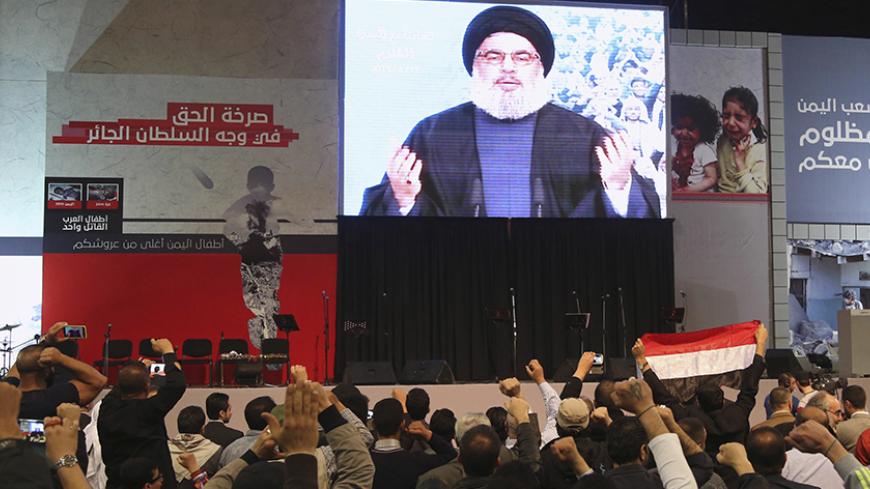 Lebanese Hezbollah leader Hassan Nasrallah greets his supporters through a giant screen during a speech against Saudi and US aggression, in Beirut's southern suburbs, April 17, 2015. - REUTERS/Aziz Taher

The Arab Gulf states have begun taking practical and executive measures sanctioning Hezbollah’s apparatus and entities supporting or dealing with it. Their actions stem from the March 2 decision by the Gulf Cooperation Council (GCC) to designate Hezbollah as a terrorist organization.

Saudi Arabia was the first to act, having taken steps even before the GCC decision. On Feb. 26, the Saudi Ministry of Interior blacklisted three Lebanese men and four Lebanese companies for ties to Hezbollah and extended sanctions on them aimed at freezing their assets in the kingdom. Saudi citizens and residents are prohibited from dealing with these individuals and companies —Vatech Sarl, Le Hua Electronic Field Co. Limited, Aero Skyone Co. Limited and Labico Sal Offshore — by order of Royal Decree A/44, targeting terrorists and their supporters. On March 3, the Ministry of Interior announced its intention to prosecute citizens and residents who sympathize, collaborate with or finance Hezbollah's militia.

The Lebanese awoke March 17 to a jarring headline in the Kuwaiti newspaper Al-Seyassah: “Kuwait bans Syrians, Lebanese and Gulf nationals from entering the country or from renewing permits.” The article reported that Kuwait had already banned a number of Lebanese and Syrians with ties to Hezbollah and the Islamic State (IS).

That same day, the Saudi newspaper Okaz, which is close to Saudi decision-making circles, published the article “Hezbollah ministers banned from Arab conferences.” The newspaper reported that ministers affiliated or allied with Hezbollah would be barred from attending Arab League council meetings, a move affecting the Lebanese ministers of foreign affairs, culture, transportation, industry, energy and education, as well as ministers of state for parliamentary affairs and public works.

The article also said sources were predicting a widening of commitment to Hezbollah's terrorist designation because of the group's insistence on maintaining its current path, rather than reconsidering and altering its policies. The group's determination was confirmed March 6 by Hezbollah Secretary-General Hassan Nasrallah in a speech in which he said, “We will teach a lesson to all the Arab countries and the Arab world, … and we will impose ourselves on the Arab world.” Five days later, on March 11, the Arab League Council of Foreign Ministers issued its decision to also classify Hezbollah as a terrorist organization.

Nasrallah then further escalated the tone of his attack against the Arab states, especially Saudi Arabia, in a speech, also on March 11, at a commemoration ceremony for one of its leaders. He said that Saudi Arabia is furious because of its failed bets in Syria and Yemen and is trying to blame Hezbollah for it. “Well, they got angry, so they directed their wrath on all of Lebanon,” Nasrallah said. He also remarked, “We don't want money, nor do we want weapons,” hinting at the Saudis' cancellation of a $3 billion military aid package to the Lebanese army.

It seems that the latest measures by the Gulf states aimed at putting a stranglehold on Hezbollah and its supporters are in retaliation for Hezbollah’s response as set out by Nasrallah, positions that escalated the crisis instead of calming or containing the situation. Meanwhile, as events spiraled out of control, the Lebanese government remained paralyzed, crippled by a political divide between those supporting Hezbollah, the March 8 camp, and those opposing Hezbollah, the March 14 alliance.

Exacerbating matters and hindering the government's inability to react to contain the crisis is that unanimous Cabinet approval, a rare occurrence, is required to make decisions in the absence of a president, who presides over Cabinet sessions. Lebanon has been without a president since May 2014. Thus, for the moment, every minister, mainly those allied with Hezbollah, has veto power and can block any decision not in line with the organization's strategy.

The crisis has Prime Minister Tammam Salam in a corner. Although Salam has publicly stated his objections to Hezbollah’s positions and expressed solidarity with the Gulf countries, he realizes that Hezbollah’s participation in his government is providing the Shiite party cover because there is no alternative in the absence of a president. The group can therefore continue with its pro-Iranian policies and its conflict with the Gulf states, which are isolating Lebanon from the Arab countries.

Salam also knows that Hezbollah’s participation in the government is the reason behind the Gulf countries' actions. Why should they continue to support a state controlled by a component hostile to them. Dissolution of the government, which would have been the best solution if the country were not in the midst of a presidential vacuum, is not an option.

If Salam resigns, yes, it would remove Hezbollah's cover, but he would also be dismantling the last remaining, quasi-functioning state institution. Rashed Fayed, a media spokesman for the Future Movement, told Al-Monitor, “The current government is a constitutional necessity.” How could a new, neutral government, or any government, be formed without a president whose duty it is to hold consultations with the legislative branch before designating a new prime minister? Indeed, the prime minister’s resignation would expand the constitutional vacuum and open the door to a review of the Saudi-brokered Taif Agreement, perhaps resulting in the Sunnis' losing prerogatives they gained in the accord.

The March 14 camp, considered an ally of the Arab Gulf states, has proven itself incapable of confronting Hezbollah in a way satisfactory to these states, because it lacks a unified strategy. One March 14 member, Justice Minister Ashraf Rifi,​ chose to resign because of the government's inability to stand up to Hezbollah, especially in regard to the case of Michel Samaha, a former minister recently released from prison by a military court after being convicted of smuggling explosives from Syria and fomenting sectarian strife in Lebanon. Others, like the Lebanese Forces, had rejected forming a government with Hezbollah in the first place without a written guarantee the organization would only use its weapons by national consensus.

The presidential crisis has exacerbated disagreements within the March 14 camp. The alliance couldn't even agree on a presidential candidate from among its ranks. Furthermore, it endorsed the nomination of two candidates, Michel Aoun and Suleiman Franjieh, from among its rivals allied with Hezbollah, after failing to agree on a common strategy because of partisan considerations. This confirmed the prevailing impression that the March 14 camp is directionless, even surrendering to its opponents’ will and candidates.

All this puts the government in a difficult position. With two ministers from Hezbollah and six others from Hezbollah’s political bloc, how will the government deal with Arab countries that have labeled Hezbollah a terrorist organization? Given the emerging crisis with the Arab countries, how can the Future Movement, the largest party in the March 14 camp, justify to its Arab backers and allies the continuation of its ongoing dialogue with Hezbollah to ease the Sunni-Shiite sectarian divide? What is the point of maintaining the dialogue while the divide is deepening and being amplified by the recent crisis with the GCC countries?

Fayed concluded, “Gulf states and Western countries have their rightful reasons to classify Hezbollah as a terrorist organization, but things are different from our position as Lebanese. We reject most of the practices of Hezbollah and recognize their seriousness. We believe it threatens Lebanon's security. There is a part of the Lebanese people that still supports Hezbollah, and we cannot exclude [Hezbollah].”