Hezbollah's support base seems to be divided on Saad Hariri's sudden resignation from Riyadh and the visit of Asaib Ahl al-Haq leader Qais al-Khazali to Hezbollah members in south Lebanon. 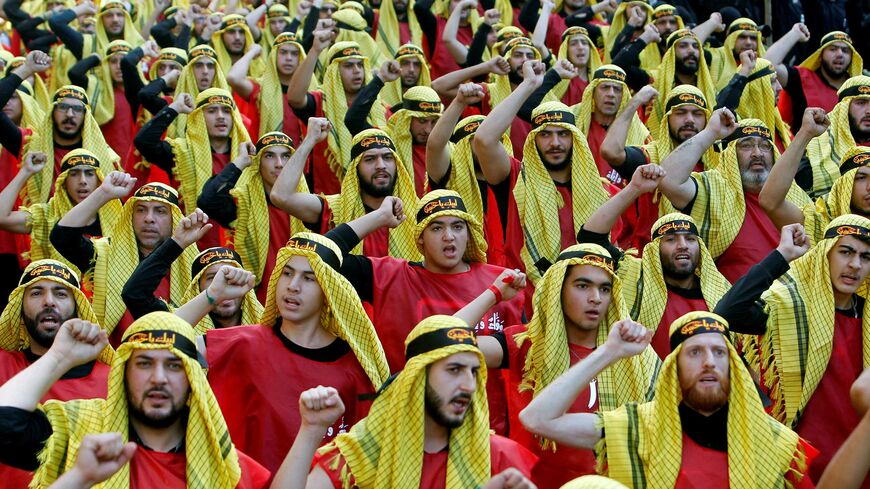 Supporters of Lebanon's Hezbollah participate in a parade to mark the last day of Ashura in Beirut, Lebanon, Oct. 1, 2017. - REUTERS/Aziz Taher

Hezbollah’s regional expansion is increasingly at odds with Lebanon’s sovereign interests and its attempts to distance itself from the Iranian-Arab conflict. The country was shaken in the last few months by two major incidents: one linked to the Nov. 4 resignation of Prime Minister Saad Hariri and another with the threats voiced on Dec. 8 by Iraqi militia leader Sheikh Qais al-Khazali against Israel on the southern border. Lebanon’s dilemma with Hezbollah’s growing military ambitions wields, interestingly, varied responses from Hezbollah’s support base.

Lebanon seems to have overcome, for now, a political crisis that shook the country last November, when Hariri announced his resignation as head of the government from the Saudi capital Riyadh. At the time, he issued a strong condemnation of Iran and its Lebanese ally, Hezbollah, a Shiite militant group that is a member of the current 30-member national unity Cabinet.

Hariri’s resignation — shrouded in mystery after news circulated that he may have made it under coercion — was quickly overturned with the prime minister coming back to Lebanon and resuming his functions, on condition that Lebanon would stick with its policy of distancing itself from regional conflicts.

In 2015, then-Prime Minister Tammam Salam committed Lebanon to the dissociation policy and called for distancing Lebanon from the region's conflicts. In 2013, Hezbollah officially recognized its involvement alongside Syrian President Bashar al-Assad’s regime in cracking down on a mostly Sunni insurgency.

Yet, on Dec. 8, a month after Hariri’s resignation, Khazali, commander of Asaib Ahl al-Haq militia, a Iraqi Popular Mobilization Units faction funded by Iran, visited members of Hezbollah in south Lebanon. His visit, which came in the wake of US President Donald Trump's recognition of Jerusalem as Israel's capital, was telling of the organization’s regional message. In a video circulated online, standing at the Fatima Gate border point overlooking Israel, Khazali voiced his readiness to support the Lebanese people and the Palestinian cause against the Israeli occupation.

Hezbollah’s support base appears to be divided around these two issues. Fadi, a Shiite cab driver from Dahieh and a supporter of the party, told Al-Monitor, “Hariri was clearly forced to resign. However, this crisis was very serious. Any escalation with Gulf countries will have a serious impact on Lebanon because it could endanger the remittances sent to Lebanon by the Lebanese living there. We need that money.”

Fadi, who did not want his last name published, had two relatives who were killed in the 1990s by Israel; he lost a cousin in 2014 in Syria, who was killed while embedded with Hezbollah there.

In an interview Nov. 11 with VOA News, Mounir Rached, a senior economic adviser to the Lebanese Finance Ministry, stated that some 220,000 Lebanese work in Saudi Arabia and send to Lebanon close to $2 billion in remittances each year.

A Lebanese businessman who is close to the Hezbollah leadership also complained in an interview with Al-Monitor about the repercussions of any future crisis with the Gulf states. “In the first two weeks of Hariri’s resignation, I lost all my clients. The situation was very tricky, but thankfully it appears to have stabilized,” he said on condition of anonymity. Over $800 million was withdrawn from Lebanon a week after Hariri’s resignation, with business coming to a standstill in the first few weeks of the crisis.

Hussein, another Hezbollah supporter who asked to use a pseudonym, told Al-Monitor, “Hezbollah is the guarantor of our protection. But personally, I think we should avoid any public arguments with the Gulf, despite their negative policies toward us. Lebanon cannot afford an economic crisis as the situation is very difficult for most people and poverty is on the rise.”

At least one in four Lebanese live in poverty according to a 2011 study conducted by the United Nations Development Program, with this number expected to rise significantly following the massive inflow of Syrian refugees.

Hezbollah expert Kassem Kassir underlined that Hezbollah’s astute management of the Hariri crisis allowed the party to reverse any negative outcome for Lebanon. “Hezbollah’s leader Hassan Nasrallah acted with a lot of wisdom. There was a clear coordination and a unified stance between Hezbollah and President Michel Aoun. Even relations with Hariri’s Future Movement have improved. Hezbollah was actually able to consolidate its position internally,” he told Al-Monitor.

Hezbollah supporters were nonetheless more divided when it came to another media incident that put in question Lebanon’s distancing policy. For Fadi, the visit of Khazali to south Lebanon shows Israel that Hezbollah is no longer alone in its war on the country. “We have strong groups backing us. The next war on Israel will be an Arab war on Israel. Iraqis and Houthis will come to fight with us. Israel should be very afraid,” he said.

On July 20, 2017, Yemen’s Ansar Allah leader Abdul-Malik al-Houthi declared that Yemenis were ready to support the resistance in Lebanon and Palestine in any new military confrontation with Israel.

However, not everyone among Hezbollah’s community base shares this opinion. Hala, an aesthetician who spoke to Al-Monitor, denounced Khazali's visit, saying, “Why don’t Iraqis and Syrians threaten Israel on their home ground?”

Karim, a Shiite from Dahieh who opposes the organization’s political line, told Al-Monitor, “It’s a message from Hezbollah to Lebanon and the region — the distancing policy is a sham.”

However, Kassir mitigates the previous statements, adding that Khazali’s visit to south Lebanon sent a powerful message to Israel, and that while some within the community may have been critical of it, negative reactions were quick to subside with most agreeing with Hezbollah’s policy.

The Lebanese organization appears to have once again been able to absorb a significant shock to the system while turning the situation in its favor. Despite economic concerns of its power base, Hezbollah’s foreign policy does not appear to be in question.