Lebanon's former Information Minister Michel Samaha was unceremoniously arrested in his home early Thursday and allegedly confessed to participating in a plan to transfer explosives from Syria to Lebanon, writes Elias Muhanna. While the facts are still murky, this doesn't happen in Lebanon, raising eyebrows about what's really going on behind the scenes. 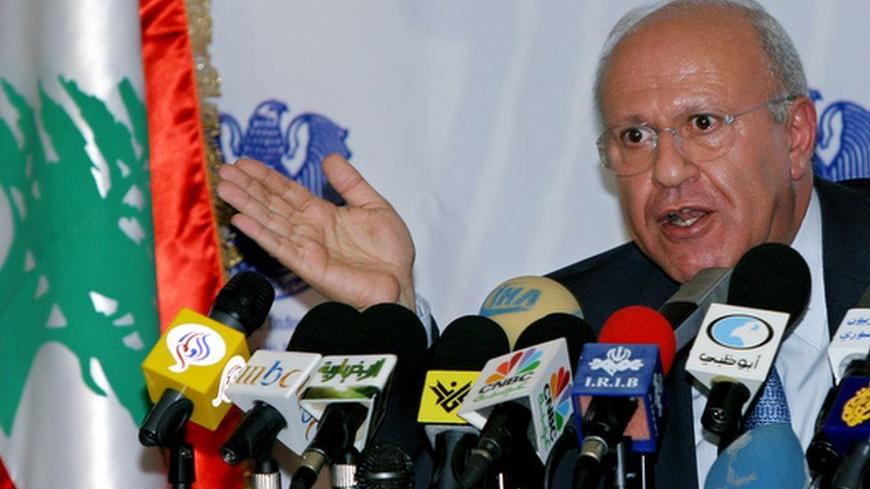 What to make of today’s arrest of former Lebanese minister Michel Samaha?

The silver-tongued politician, well-known for his close ties to the Syrian government and its allies in Lebanon, was arrested Thursday morning at his home in a Beirut neighborhood. A group of police officers reportedly stormed the apartment at dawn, while the couple was still in their pajamas, “armed as though they were going to go liberate something,” said Samaha’s wife, Gladys.

Within a few hours, a Lebanese TV station was reporting that Samaha had confessed under interrogation that he had participated in a plan to transfer “explosives from Syria to Lebanon in order to carry out bombings in North Lebanon, particularly in the area of Akkar, with Syria’s knowledge.”

As of the time this post went to press, no official word had come out regarding the reasons for Samaha’s detainment or his alleged confession.

In the meantime, though, here are three reasons to pay close attention to this story:

1. This doesn’t happen in Lebanon.

Yes, we all remember the days when high-ranking security officials were dragged into custody by the Lebanese armed forces because of their alleged involvement in the assassination of Rafiq al-Hariri.

But that was then and this is now. The likelihood that a figure with Samaha’s profile (and connections) could be unceremoniously tossed in the back of paddy wagon without a shred of evidence is very slim. Leaks suggest that the Internal Security Forces (ISF), had gathered substantial evidence of Samaha’s involvement in the alleged plot including telecoms, video and audio surveillance, and witness testimony. If the evidence is thin, there are going to be major consequences.

On the other hand, there is something implausible about the story. Even if one were to assume that the alleged plot existed and that Samaha had knowledge of it, it seems highly unlikely that he would have been involved on an operational level.

2. The fragility of the Lebanese government.

The current Lebanese government, headed by Prime Minister Najib Mikati, is already looking very fragile as it is. Divisions in recent weeks between its main primary bloc leaders over such issues as Lebanon’s energy policy have softened the ground for a potential walk-out. This was before the cabinet approved a controversial new electoral law based on proportional representation that seems doomed to die in Parliament.

With the arrest of Samaha, Prime Minister Mikati has significantly gone out on a limb. If Hezbollah decides to demand Samaha’s release on pain of the government’s collapse, Mikati will have few cards to play. On the one hand, he will find it politically impossible to go against the ISF, given that Samaha is being accused of involvement in a plot to sow strife in Sunni areas. Mikati, who has long been painted by the Future Movement (Lebanon’s main Sunni party, currently sitting in opposition) as a fig leaf for Syria and Iran’s allies, is eager to maintain his bonafides as a leader in the Sunni community. Being seen as kowtowing to Hezbollah  would be political suicide for Mikati less than a year before the next parliamentary elections.

On the other hand, if Hezbollah keeps mum about Samaha’s arrest, Mikati will come off looking like a crime-busting superhero.

Samaha was arrested by the ISF, the leadership of which is said to be under the sway of the Future Movement. Within minutes of the incident, Samaha’s friends and associates were calling it a brazen political move.

Jamil al-Sayyid, the former director of the General Security Service who endured a years-long detainment for suspected, but never proven, links to the Hariri assassination, railed today against Samaha’s arrest. He pointed out, among other things, that the arrest last May of an Islamist named Shadi al-Mawlawi threw the Sunni community into a fit, mainly because the arrest was carried out by the General Security Service, which is seen as being close to Hezbollah.

How can someone like Samaha be dealt with so crudely, al-Sayyid demanded, when a nobody like Shadi al-Mawlawi could be promptly released with an apology?

There seems to be a hidden war taking place between Lebanon’s military-intelligence branches. So far, there have been few public casualties of that war, but if the stakes keep rising as they did today, that may change rapidly.

Elias Muhanna is an assistant professor at Brown University and the author of QifaNabki.com, a blog on Levantine political affairs. Follow him on Twitter @QifaNabki