Bombings in Lebanon point to ISIS

Recent security incidents, including the June 23 car bombing in Beirut's suburbs, are likely signs that ISIS plans even more attacks in Lebanon. 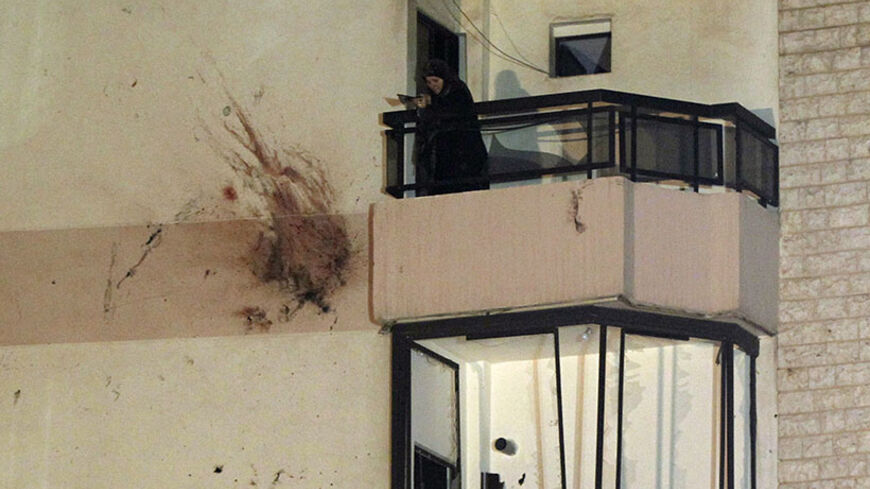 A woman stands on a balcony as she removes shattered glass beside bloodstains on the wall at a site of an explosion in Beirut's southern suburbs, June 24, 2014. - REUTERS/Mohamed Azakir

It did not take too long for the violence of the Islamic State of Iraq and al-Sham (ISIS) to reach Beirut. Last week, this column warned of the potential for further terrorism in Lebanon following the ISIS advances in Iraq and a string of supposedly isolated security incidents in the country. There was a car bombing late on June 23, a suicide attack, the arrests of dozens of alleged ISIS affiliates, news about terrorist networks and plots for major political assassinations and coup attempts.

Nevertheless, the hysteria caused by the fear of this terrorist group on the one hand, and the calculations of some to invest in this fear to serve political interests on the other — besides the multiple Lebanese and international parties following up on this issue — required a thorough examination to know exactly what happened in Beirut in the past few days.

The ISIS storm started to blow on Beirut on June 17. On that evening, Lebanese security forces, in cooperation with members of Hezbollah, shut shown a number of roads to some well-known hospitals in the southern suburbs of Beirut. The next day, sources close to Hezbollah told Al-Monitor that these measures were taken following information received by two Lebanese security services, that ISIS was plotting an attack against a hospital affiliated with Hezbollah, where some members of the party were believed to be under treatment for injuries sustained while fighting in Syria. The same source told Al-Monitor that Hezbollah learned that ISIS was probably digging tunnels to attack areas where Hezbollah was deployed, starting from the ISIS centers in some Palestinian refugee camps in Beirut’s southern suburbs that are close to the areas where Hezbollah is deployed as well. The same sources told Al-Monitor that the two security services that reported this preliminary information to Hezbollah, confirmed having received these reports from Western security services.

The following day, the tunnel story turned out to be untrue, and none of the hospitals were struck. Nevertheless, the rumors caused some roads to be more or less permanently closed at night, and led to the arrest of around 10 suspects, later released, after it turned out that they were not involved in any illegal activities.

The ISIS storm did not blow over at this point. Three days later, on June 20, US Ambassador David Hale set a meeting with Lebanese Minister of Foreign Affairs Gebran Bassil at the ministry's headquarters in Ashrafieh, in the heart of Beirut, at 11 a.m. Shortly before the meeting, Hale told Bassil the meeting was canceled, because it was impossible for him to leave the embassy for security reasons.

Simultaneously, a conference on research was held at the Ministry of Education and Higher Education’s headquarters in western Beirut, and parliament Speaker Nabih Berri was supposed to attend. Yet, contacts between the Ministry of Interior, Berri and the conference organizers, resulted in canceling the conference, for security reasons as well, amid talks of a plot to assassinate Berri at the conference. At the same time the conference was canceled, security forces were arresting more than a dozen men in a hotel in the capital city, Beirut, on suspicion that the mastermind of the assassination plot was in that hotel. Later, this also turned out to be inaccurate and the detainees were released.

In the meantime, General Security chief Maj. Gen. Abbas Ibrahim, who is one of the most active and productive chiefs of Lebanon’s security services, was heading to the Bekaa Valley from Beirut. As Ibrahim crossed Dahr al-Baidar, a suicide car bomb went off at the ISF checkpoint near his convoy.

At this point, the information that ISIS was trying to return to Beirut was confirmed. This information was from a US source, as a ministerial source told Al-Monitor. As for the suicide bomber, he could not reach his target, probably because coincidence played its role. Thus, he was either confused or thought he was exposed after he saw the convoy, and therefore he preferred to blow himself up at the ISF checkpoint; or he could have thought that he was dealing with an important and hostile target, and since he did not reach Beirut, he tried to kill the target in the private convoy.

Quite some time may pass before details of what took place in the past few days in Beirut is revealed in an accurate and certain way. Yet, a ministerial official confirmed to Al-Monitor that the official interpretation of these events still considers that any bombing or assassination will not be an objective in itself for ISIS. Rather, it is going to be the needed detonator that launches the ISIS attack in Lebanon.

When an explosion or an assassination takes place, the country will consequently fall into chaos, and the Lebanese authorities will fall into a state of confusion and chaos, which provides ISIS with the opportunity to attack. Government expectations for the starting point of the attack continue to focus on two points; either the Palestinian refugee camp in Ain al-Hilweh near Sidon in southern Lebanon, where there is a significant number of Sunni fundamentalist factions that can assist ISIS, or northern Lebanon, between Tripoli and Akkar, where ISIS hopes it will have supporters among the Lebanese Sunni fundamentalist groups and displaced Syrian Sunnis.

Concerns, tension and a state of alert will prevail over the upcoming weeks, the ministerial official told Al-Monitor. The battle is not over. It has not even begun. Worst of all is that despite all the estimations and possibilities, no one can assert where and when it is going to erupt.