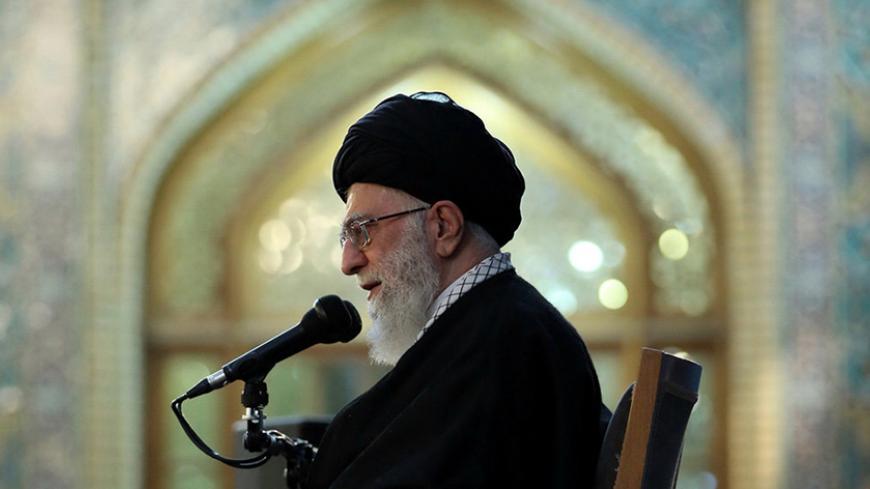 Every year, Iran’s Supreme Leader Ayatollah Ali Khamenei addresses Iranians from the holy city of Mashhad for his Nowruz message. He discusses the main issues of the country, both domestically and internationally, and designates a slogan for the upcoming year. Khamenei designated this year as the year of the "Resistance Economy: Action and Implementation."

The “resistance economy” is a term that first came into popular use in 2014. In short, it is an economic policy that stresses a focus on domestic production, promoting a knowledge-based economy and reducing vulnerability on oil and gas exports.

After the speech, Khamenei’s website published “10 fundamental actions for rescuing the country’s economy.” The 10 steps, which were presented in chart form, listed such things as “resurrect domestic production, avoid exports that weaken domestic production, not waste money that enters the country after the nuclear deal, make sensitive and important sectors [oil, gas, airplane, train and ship manufacturing] knowledge based, make the transfer of technology a condition of foreign trade, seriously fight against corruption and give special attention to medium and small industries.”

President Hassan Rouhani has primarily viewed Iran’s struggling economy as a symptom of the international sanctions on his country over its nuclear program. Conservative Iranian politicians have argued that rather than reducing the country’s nuclear program in order to alleviate the economic pressure, Iran should focus on its own domestic capabilities, i.e., a resistance economy. It is no surprise then that a great deal of the conservative commentary after Khamenei’s speech has been focused on the “resistance economy” and the Rouhani administration's inability or lack of desire to fully implement its policies.

Economist Hojatollah Abdolmaleki told Fars News that one of the problems was “the lack of a correct understanding of the resistance economy” within the administration. He said that officials in the administration view it as “a project alongside the other economic policies.” Abdolmaleki said that this view has caused “great damage” because the resistance economy should be implemented at all levels.

Gholam Reza Mesbahi, a member of parliament’s Planning and Budget Commission, said, “In the two years since the policies of the resistance economy have been issued, the administration has not taken action on this issue.” He added, "Instead of focusing on international relations and the opening of the economy through this path, there should be special efforts toward domestic production, use of national capacities, natural resources, agriculture, industry, mines and tourism.”

Rouhani’s vice president, Eshaq Jahangiri, responded to the criticism against the administration in regard to the implementation of the resistance economy. He said that in cooperation with the other branches of government, there have been a total of 12 resistance economy plans presented. He did not offer details on the plans.

Before Khamenei’s speech in Mashhad, Rouhani also addressed Iranians for Nowruz in a video message. “I am hopeful and I am certain that with cooperation and domestic efforts and constructive engagement with the world, we can follow the path of prosperity, work and growth in economic activity,” Rouhani said. While not entirely different than Khamenei in substance, the speech shows differences of opinion and emphasis toward addressing the economic problems of the country. If Rouhani is not able to improve the economy in the new year, based on Khamenei’s speech and the subsequent commentary, it seems that the pressure on his administration will be increased dramatically.