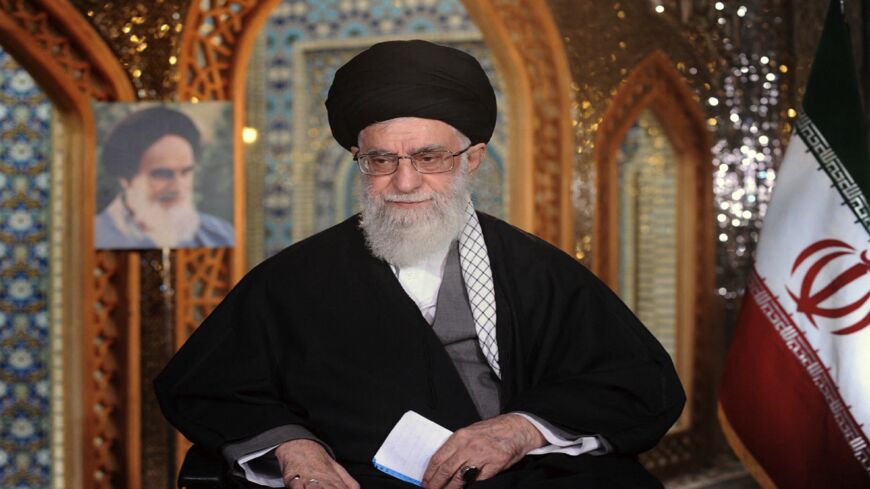 Iran's supreme leader, Ayatollah Ali Khamenei, on March 20, 2013, shows him seated in front of a portrait of his predecessor as he addresses the nation on the occasion of Nowruz, the Iranian New Year, in Tehran. - IRANIAN SUPREME LEADER'S WEBSITE/AFP via Getty Images

Marking the occasion of the Iranian new year, or Nowruz, Iran’s Supreme Leader Ayatollah Ali Khamenei addressed Iranians and discussed the focus of the country for the upcoming year. Khamenei officially themed the focus of the year “Production: Knowledge-based and job creating.”

Discussing the previous year, Khamenei said that one of the important things that took place was a presidential election, despite the challenges of the coronavirus in holding that election. He said that the new Ebrahim Raisi administration “has revived hopes amongst the people.” Khamenei also praised the country’s vaccination efforts. Iran’s population is 67% fully vaccinated. Since the outbreak of COVID in February of 2020, approximately 140,000 Iranians have died from the virus. Some officials have said that the official number could be twice as high.

Another one of the accomplishments for Iran in the previous year, according to Khamenei, is the US “confession of a humiliating defeat in the maximum pressure” campaign against Iran. When former President Donald Trump exited the Joint Comprehensive Plan of Action (JCPOA) nuclear deal in 2018, he reinstated sanctions and initiated a “maximum pressure” campaign to get Iran to agree to terms described by former Secretary of State Mike Pompeo that in essence would change the entity of the Islamic Republic’s policies.

Iran is currently in talks with European countries to revive the JCPOA. The revival of the deal would see US sanctions lifted and Iran reduce its nuclear program to JCPOA-designated levels. Given that the deal hinges on the US elections, it is unlikely that any European country will invest in Iran for fear that a Republican candidate takes office in 2024. However, Iran’s ability to sell its oil without having to implement numerous plans to circumvent US sanctions would alleviate economic pressure on the country.

Despite the nuclear talks, Khamenei has always stressed that the path to a better economy is reliance on domestic capabilities. “Production is the key to solving economic problems and the path to pass through economic difficulties,” he said. This is why he says he named “production” as the theme of the year — one focused on knowledge-based and job-creating production. Although he did not specify what he meant by that, it is likely he will elaborate in his full speech marking the new year.