In Iran, the hard-line take on the “resistance economy” has led to misunderstandings about the concept, with pro-government economists emphasizing the need for consensus on how to develop the economy. 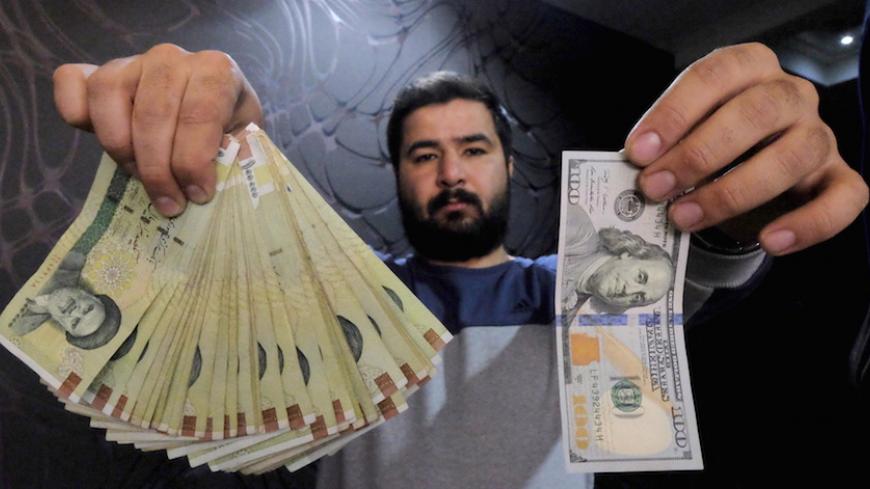 A money changer holds a $100 bill (R) and the amount being given when converting it into Iranian rials (L) at a currency exchange shop in Tehran's business district, Jan. 20, 2016. - REUTERS/Raheb Homavandi/TIMA

TEHRAN, Iran — A small protest was held April 13 in front of the Ministry of Economic Affairs and Finance building in the Iranian capital of Tehran, during which demonstrators gathered to criticize President Hassan Rouhani’s administration for not respecting the economic guidelines known as the “resistance economy.”

Supreme Leader Ayatollah Ali Khamenei, who introduced the general policies four years ago to thwart the effects of US-led sanctions, designated this Iranian calendar year the year of “Resistance Economy: Action and Implementation” — a slogan that has since been exploited by hard-liners to accuse Rouhani’s economic team of poor performance.

The hard-line take on the “resistance economy” has led to misunderstandings about the concept — one of the most controversial in Iran. Indeed, far-right political groups seem to have used the supreme leader’s remarks to ratchet up pressure on Rouhani over his “liberal” economic positions.

The April 13 protest was not unprecedented. Hard-liners had also held a protest in March to criticize what they called “excessive” imports. That criticism comes as official data released by the Customs Administration show a sharp fall in the value of imports — from $53.4 billion in the 2014-15 fiscal year to $41.4 billion in 2015-16. Protesters, however, insist that massive imports have already led to the bankruptcy of many domestic manufacturers.

Hojatollah Abdolmaleki, a lecturer at Imam Sadiq University who attended the March protest, called for the strengthening of domestic production as a strategy that could “destroy the enemy’s weapon and help the country win the economic war.” In an interview with the semi-official Fars News Agency, Abdolmaleki expressed concern about the “inability of liberal economists to implement the 'resistance economy' program,” warning that there is a “semantic and theoretical deviation” from the original doctrine. He also denounced efforts to attract foreign investment, claiming that the Rouhani administration has been neglecting “10 quadrillion rial” of capital, which he insists is already available within Iran.

This is while the “resistance economy” does not discourage foreign investment at all. Article 10 of the doctrine’s general policies clearly calls on executive authorities to ease regulations, provide incentives for foreign investors and use the incoming capital for boosting knowledge-based industries. Meanwhile, Article 12 underlines that the economy will remain vulnerable to external pressure if the government fails to either expand strategic ties with other countries or engage in active diplomacy, which is a must in order to push national economic plans forward. The latter article even encourages authorities to take advantage of international organizations’ capacities to make the Iranian economy more dynamic.

Pro-Rouhani experts argue that hard-liners have misunderstood the concept of “resistance economy” as mere self-sufficiency — or at the very least, feign such misunderstanding. “Self-sufficiency means we have to plant what we need, but the resistance economy urges us to plant more in order to feed ourselves and others at the same time. This way we will make other economies dependent on ours,” said prominent economist Mousa Ghaninejad in a recent interview with leading economic magazine Tejarat-e Farda.

Ghaninejad argues that Iran should redefine its national security policies, urging officials to build an economy based on engagement and stronger international ties, so that Iran can use its industrial know-how as an effective tool to protect and advance its national security interests. In his opinion, China or South Korea would be good models to follow rather than North Korea — a country that sees self-sufficiency and militarism as a means of protection.

Liberal economists, who are a majority among economists in Iran but who have little political leverage, believe that the country’s economy needs structural reforms and should produce only the products in which it has a comparative advantage. Samira Karami, secretary of the budget and planning committee of the Expediency Council, wrote in Tejarat-e Farda on April 15 that development plans must be focused on the industries in which Iran has a comparative advantage. “This is the model all emerging economies have used to survive their dire economic straits,” she said. To this end, a “political consensus” should first be achieved, according to Masoud Nili, top economic adviser to Rouhani. Indeed, Nili warned in January that political groups have to reach a consensus or forget about economic prosperity.

However, Ghaninejad believes the administration’s efforts to reach a consensus with rivals will fail simply because hard-liners do not intend to make a compromise. Iran urgently needs to make structural reforms or else will have to "deal with plunging oil revenues as well as underdeveloped and vulnerable industries for long years — which is not the utmost goal of the resistance economy,” he has warned.

In this vein, misunderstandings between the hard-liners and the ruling moderates over how to approach economic development that will bring benefits to all social groups appear to be turning into a sad tragedy. If this continues, it could eventually result in economic and political chaos, delaying economic reforms, creating dissatisfaction among middle and lower classes, and ultimately threatening the long-run sustainability of both the economy and current politics.