The government of Iran might soon be grappling with how to manage a popular mobilization against US and international sanctions. 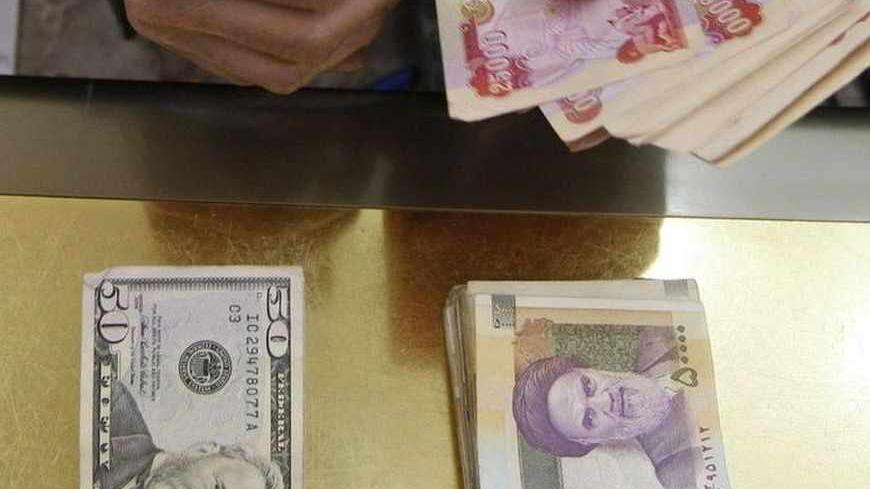 Iranian rials (R) and US dollar banknotes at a money exchange as the vendor counts Iraqi dinar banknotes at his shop in Baghdad, January 30, 2012. - REUTERS/Saad Shalash

In an unprecedented move, three prominent Iranian economists — Saeed Leylaz, Mousa Ghaninejad and Mohammad Mehdi Behkish — have advocated the launch of a campaign under the banner of a "civil movement against sanctions." Ghaninejad, in a July 13 interview, told Tejarat-e Farda, “Both from a perspective of international law and human rights, US unilateral sanctions [against Iran] have no legal ground.”

Ghaninejad argues that by imposing sanctions on Iran, the United States does not serve the cause of peace because it forbids trade, while trade in itself is a major element in establishing peace between nations. “The more economic interdependence between nations the more peaceful international relations become. In fact, the main reason for the formation of many international institutions, specifically the United Nations and the organizations under its aegis, is to develop economic ties between countries in order to make the relations between them more peaceful.”

Meanwhile Behkish, also speaking to Tejarat-e Farda, maintained, “[Until recently] the people of Iran were not in a position to set up this movement. However, in light of the June 14 [presidential] elections, this movement can now be initiated. [Hassan Rouhani’s] election has changed the international climate in favor of Iran.” He further asserted, “The strategy of this campaign should be defined based on the principle of free trade. According to this principle, the West cannot preclude trade [between Iran and the world] simply on the basis of a claim that is not validated in any court.”

Ghaninejad is optimistic about the potential effectiveness of the campaign. He posits that since public opinion can influence government policies in the West, if his campaign is able to affect public opinion, it will certainly impinge upon sanctions policies. Ghaninejad noted, “For instance, one of the reasons that America withdrew from the Vietnam War was the emergence of the anti-war campaign from the universities in the US and Europe.”

Leylaz believes that the climate is finally ripe for launching the campaign. He told the news outlet Fararu on July 15, “Before this election, we were not united. This is a reality. When there is no harmony between the people and the government, or even within different factions of the government, the country cannot talk with a unified voice before the international system.”

The idea of a civil anti-sanctions movement is gaining support among Iranian bloggers as well as popular nongovernmental websites. Even ISNA, the semiofficial Iranian Students' News Agency, announced the launch of a “No to Sanctions” campaign.

On July 22, Entekhab, a popular website, published a piece titled “Civil Movement against Sanctions.” The article discussed the movement against the Multilateral Agreement on Investment (MAI), a draft agreement negotiated by members of the Organisation for Economic Co-operation and Development between 1995 and 1998.

The article maintained that the movement that emerged against the MAI gained such international support that its collapse became inevitable. “For the first time in human history, a civil global movement imposed its will, through the internet, on the economic and military powers of the world.”

It also argued that in the last eight years, due to the adoption of certain aggressive policies, both hardliners and moderates in the United States have united against Iran. That, however, might now change. Entekhab noted, “With the election of Hassan Rouhani, in an unprecedented move, on July 17, 131 representatives, both Democrats and Republicans, urged Obama to engage with Iran diplomatically to solve the dispute [over Iran’s nuclear program]. This is a clear manifestation of differences in Congress over the approach toward Iran.”

Entekhab asserted that “supporters of sanctions rely on popular unrest inside Iran” to yield an Iranian surrender. It continued, however, “With the people entering the scene, that weapon becomes ineffective and the philosophy behind the sanctions will be called into question.”

There is heated debate on Iranian websites and forums about the leadership of this movement, and there is also a dilemma ahead: If the government takes control of the movement, most likely there would be no challenge to it domestically. At the same time, it would be hard to imagine the movement gaining the support of the nongovernmental organizations, human rights groups, unions and reputable intellectuals as well as centrist and left-leaning politicians internationally. They may be willing to support a civil movement initiated by the people of Iran based on humanitarian principles, but they would not want to get involved in supporting the Iranian government given the sensitivity of Iran’s nuclear program.

One viable option for gaining international support could be leadership from outside the establishment. Sources in Iran say that such popular figures as former reformist president Mohammad Khatami or Hassan Khomeini, Ayatollah Ruhollah Khomeini’s grandson, could take on the task of leading the movement. Khatami has not been part of the establishment since 2005, and his reputation as a moderate and reformist could lend credibility. Khatami is known worldwide for his reformist visions.

Someone assuming leadership, outside the official political structure, of a movement with the potential to garner international support might be viewed as threatening by the hardliners and therefore could be rejected. Apparently Entekhab anticipated this dilemma, which is why it asserts that to follow the anti-MAI model, the movement does not need a leader. That said, however, the anti-MAI model may not sit comfortably with Iranian culture. Iranians do not believe in leaderless movements, be they social or political. In the absence of a leader, they would elevate one.

Entekhab views the formation of a civil anti-sanctions movement as necessary to strengthening Rouhani’s position in any possible talks with the Americans. The Wall Street Journal recently reported that the Barack Obama administration intends to press for direct negotiations with Tehran. Entekhab maintains that if the civil movement gains enough momentum, “America will not view itself confronting a government. Rather it will find itself against a nation that has deprived it of its main weapon [of creating unrest in Iran].”

All in all, for the Iranian civil movement against sanctions to play a role in combating the sanctions, first and foremost the issue of its leadership must be resolved. Khatami’s presence could help to effectively spread the protest, but that would require an accord between him and the hardliners at the outset. Will or can President-elect Rouhani serve as a bridge between them?

Shahir ShahidSaless is a political analyst and freelance journalist, writing primarily about Iranian domestic and foreign affairs. He lives in Canada. Email him at shahir@iranamerica.com.