Why some in Israel are pushing for a two-year budget

Opposition party leaders Yair Lapid and Avigdor Liberman are disappointed by Finance Minister Moshe Kahlon, who affirmed that he intends to stay in the coalition. 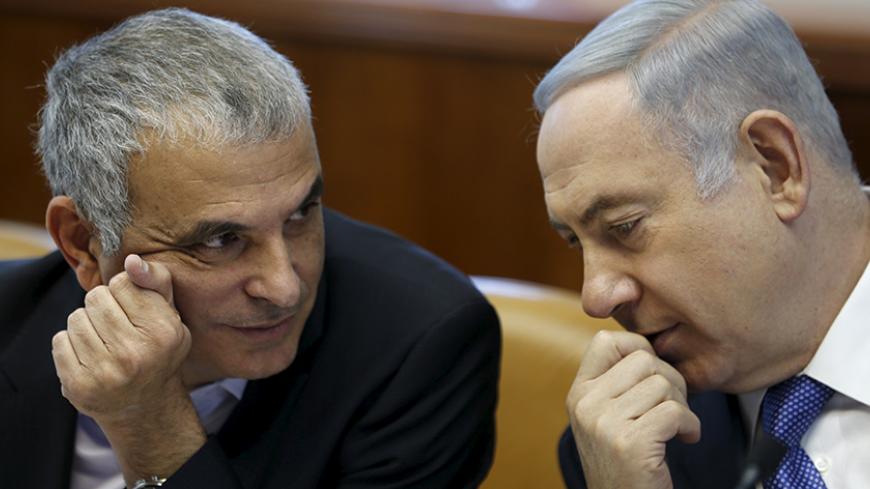 When the chairman of the Kulanu Party, Finance Minister Moshe Kahlon, first joined the coalition, Prime Minister Benjamin Netanyahu marked him — and justly so — as the weakest link.

But Kahlon got almost everything he asked for in exchange for joining the government, including, first and foremost, the prestigious Finance Ministry. At his request, the ministry’s powers were expanded by granting it control traditionally given to other ministries and government agencies so that he could enact his housing and banking reforms. Never before was so much authority concentrated in the hands of a single finance minister. He wielded considerable political power, and with his 11 seats, he could act independently.

Ideologically, Kahlon was also the least committed partner in Netanyahu’s narrow, right-wing government of just 61 seats. While Naftali Bennett’s HaBayit HaYehudi Party is an integral part of the right, and the ultra-Orthodox parties were waiting impatiently for their chance to return to power, Kahlon was perceived as something of an outsider who had a certain basic hostility toward Netanyahu. As the sole leader of his party, he could also pick up and leave the coalition — and the prime minister — whenever he wanted, forcing new elections.

Also contributing to the feeling that Kahlon was just a temporary “guest” was the fact that he refused to hide his disappointment over the way he was trapped in such a narrow, right-wing government. Shortly after the March 2015 elections, Kahlon was the first to sign a coalition agreement with Netanyahu, and he only did that because he was convinced that it would be a much larger coalition. Having no further say in the matter, Kahlon made do with a faint promise to his supporters that he would continue to pressure Netanyahu to expand the government in any way possible.

On the other hand, the finance minister also continued to maintain close political and personal ties with Avigdor Liberman, the chairman of Yisrael Beitenu, and with former Likud Minister Gideon Saar. It is worth noting that these two men are preoccupied on a regular basis by all sorts of political speculation and scenarios about how Netanyahu can be brought down. The relationship between them and Kahlon includes frequent meetings and discussions, which were never kept from the prime minister.

It is possible that this was why Liberman was so confident in his assessment, made just months after the coalition was formed, that this government would barely last a year. “I can tell you with complete confidence that there will be new elections for the 21st Knesset sometime in 2016,” Liberman announced at a party conference in August 2015. His friend and coalition colleague Yair Lapid, the chairman of Yesh Atid, offered a similar assessment around the same time, when the 2016 budget was submitted to the Knesset.

In a media interview at the time, Lapid, a former finance minister, explained that the new budget indicates that elections would take place within the coming year. “The new budget will pass, but the next budget won’t,” Lapid said. “I’ve never been a successful pundit, but based on my familiarity with the budget, I can say that it is just like the 2012 budget. It’s a budget that grants special benefits and handouts to the average citizen, because we are on our way to an election year.”

It is still 2016, and Liberman and Lapid are growing stronger, even in the opposition. On the other hand, there are no elections on the horizon, and the chances of elections being called are slim. But even more importantly, their ace in the hole, their horse in the race, the very man who should have dismantled the coalition, is turning out to be its most stabilizing factor.

It seems as if their confident predictions about the next elections relied on the assumption that Kahlon would resign. He may even have instilled this hope in them during their private meetings and conversations. Netanyahu’s name inevitably came up, as an unfortunate circumstance that can and must be changed.

That is why it is safe to assume that neither Lapid nor Liberman was pleased with Kahlon’s statement on March 14. Nor was Saar, whose name is often mentioned together with theirs as part of a political effort to prevent Netanyahu from forming his fifth government.

At a press conference in the Knesset to mark the one-year anniversary of the last elections, Kahlon reviewed his achievements in the housing market. More apartments were made available for young couples, and he had plans to improve the situation even more over the coming years. But above all, he emphasized that he is in the Netanyahu government for the long haul, or, in his own words, “The Kulanu Party is the most stable part of the coalition.”

At the same event, Kahlon resolved any uncertainty over whether he would submit to Netanyahu’s demands and support a two-year budget, even though he initially opposed it. He responded that despite his misgivings, he would adopt the prime minister’s position. There was something strange about the way that Kahlon explained his opposition, limiting it to the bottom line that he had no intention of coming into conflict with Netanyahu. He said that he opposed a two-year budget because it is difficult to anticipate income and outlays two years in advance, especially when it comes to economic variables such as tax income, budgetary expenses and the rate of growth. Doing so, he said is problematic professionally and is not done anywhere else in the world.

Nevertheless, while he explained why a two-year budget was a bad idea and promised to try and change it, in the same breath he also said that he has no choice but to accept the decree. After all, he was obligated to do so because of his coalition agreement with Netanyahu.

Nevertheless, it is hard to ignore the fact that Kahlon is granting Netanyahu considerable breathing space and a stable coalition for two years, except in the unlikely event of a serious coalition crisis. It is easy to understand why Kahlon did that, too. He needs achievements to regain the Knesset seats he lost to Lapid in the polls since the last election, and for that he needs time.

As far as Netanyahu is concerned, a two-year budget is a major political achievement, since it lifts a cloud of uncertainty off his narrow government. At the same time, he is also leaving Liberman out to dry in the opposition for a while longer. Maybe this will force him to reconsider joining the government in exchange for the Foreign Ministry. After all, it is still waiting for him.