Ministers Moshe Kahlon, Aryeh Deri and Naftali Bennett each look to appease their constituencies when voting over the 2016 Israeli state budget. 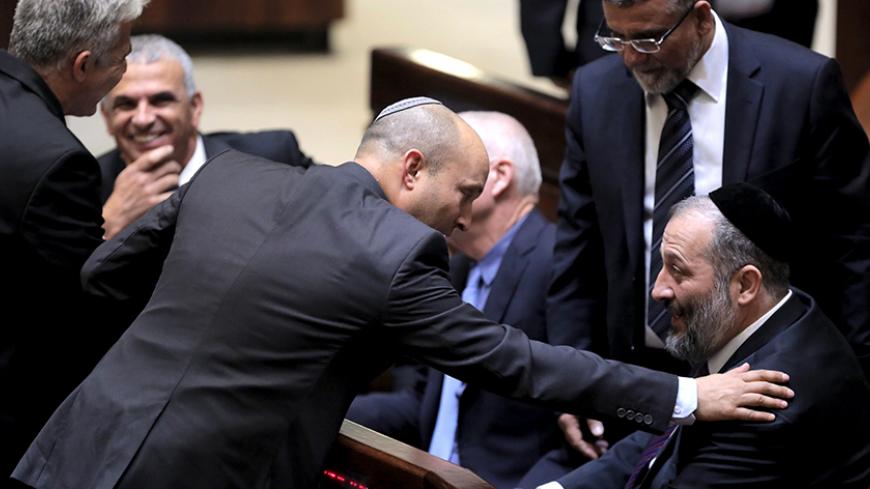 Naftali Bennett (L), leader of the Bayit Yehudi party, congratulates Aryeh Deri, leader of the Ultra-Orthodox Shas party, (R) on their ministries, during a swearing-in ceremony in the Knesset, the Israeli parliament in Jerusalem, May 14, 2015. - REUETRS/Jim Hollander

On the evening of Nov. 11, just moments before the Knesset’s Finance Committee took its crucial vote to approve the state budget, Shas Party members announced that they intended to vote against the budget. The chairman of the Shas Party, Minister of Development of the Negev, Galilee and Periphery Aryeh Deri, had instructed the members of his party to protest at an especially problematic time, leaving the committee’s chairman, Knesset member Moshe Gafni of Yahadut HaTorah, little choice but to cancel the meeting.

The excuse for the crisis that Deri initiated, and which is currently being resolved, was his demand that the VAT be reduced to 0% on public transportation for the entire population and on water for weaker sectors in Israeli society. The cost of this plan is estimated to be hundreds of millions of shekels.

The “Zero Percent VAT Law” is the banner that Deri is planning to raise in the next election, when appealing to the “transparent population” (the weaker sectors, as referred to by Shas in its last election campaign), which he hopes to represent. Hence, it is likely that by Nov. 19, when the budget for 2015-16 is brought before the Knesset plenum for approval, Deri will be on the winning side. He simply cannot allow himself to give up on his plan for 0% VAT, which was his big campaign promise. This is especially true after all the political and social damage Deri suffered by resigning from the Ministry of the Economy, just so that Prime Minister Benjamin Netanyahu could pass the natural gas blueprint (which he originally refused to approve).

On the other side of the argument is Finance Minister Moshe Kahlon. Kahlon came to this position as the great social hope of the last elections, on March 17, but his image has suffered considerably since then — not least because of his personal friendship with billionaire Kobi Maimon. It was because of this friendship that he avoided dealing with the dismantling of the gas monopoly, even though he promised explicitly to work on that before the last election.

Concerning the natural gas outline, Kahlon and Deri are both perceived by a significant part of the public as lending a hand to an anti-social maneuver, which would afford an advantage to the tycoon class but make it very difficult for the public to benefit from natural gas resources. As long as countrywide protests against the gas outline continue under the slogan “The Great Gas Robbery,” Deri and Kahlon will both regard the budget as a way to boost their image as ministers with a social agenda, fighting for the middle class and the weaker sectors of the population.

In an effort to resolve the crisis, Deri and Kahlon met on Nov. 13. They arrived at the meeting fully aware that the crisis must be resolved, because that’s what is needed when you have a fragile 61-seat coalition (out of 120 Knesset members) — the margins aren’t wide enough to take any risks. That is also the reason that once the meeting was over, both ministries made it known that there had been “progress.” While the Finance Ministry generally opposes Deri’s "Zero Percent VAT Law," Kahlon can also use it to score some points among broad sectors of the electorate.

Another benefit expected to be included in the budget is a 50% raise in the salaries of soldiers serving their compulsory time in the army. While this was already agreed upon by Kahlon and Defense Minister Moshe Ya’alon, it would add another 600 million shekels (about $154 million) to the budget. In this case, it was the fulfillment of an election promise by Kahlon, the chairman of the Kulanu Party. The news, which was announced on Nov. 13 on the front page of Israeli daily Yedioth Ahronoth, also found a place on the minister’s Facebook page. He wanted to make sure that everyone following him on social media saw the story, which was quite flattering as far as he was concerned.

As the date for the Knesset to approve the budget approaches, all sorts of threats and political crises can be expected to pop up. It’s the same ritual that every government faces just before approving the state budget. Nevertheless, in this case, it is a significant test for Netanyahu’s narrow right-wing coalition, which is only eight months old. On the other hand, none of the parties in the coalition really wants to see the government fall apart. This is especially true of the finance minister, who needs time to rehabilitate himself before facing any new elections. The budget is therefore expected to pass, with each component of the coalition satisfied that its demands have been met.

In other words, by the evening of Nov. 19, all the coalition parties will be on the winning side.

To Kahlon’s credit, it should be noted that his outstanding political skills make it possible for him to conduct budget negotiations with the different parties in a relatively calm environment. He knows that this is a political budget and fully realizes that each of the coalition factions' heads needs to present to his voters a significant achievement, just like he does. That is why each of them will receive a pound of flesh to flaunt before their electorates. Such, for example, is the case with Ya’alon, who is asking for an 8 billion shekel (about $2 billion) increase to the defense budget.

By Nov. 13, the headlines in the papers were already announcing that the Israel Defense Forces might have to deploy as many as 70 reserve battalions in the West Bank in 2016, in response to the ongoing conflict with the Palestinians. It is worth reading these headlines while considering the fast-approaching vote on the state budget. Here too, the outcome is obvious. The defense budget will be increased accordingly.

The person who is the most wary of everything that is happening with the budget is the chairman of Habayit HaYehudi, Education Minister Naftali Bennett. Bennett knows that as soon as the budget is approved, the government’s survival is assured until at least the end of 2016. This means that the option of a unity government with the Zionist Camp will be back on the table. The opposition also realizes that by approving the budget, the government’s chances of survival increase considerably. Hence, it will be easier for the leader of the Zionist Camp Isaac Herzog to try and bring his party into the government.

Anyone looking for hints that such a political scenario might take place found them in Netanyahu’s statement during his meeting with President Barack Obama on Nov. 9 that he is committed to a two-state solution. In a conversation with Al-Monitor, a senior Likud minister offered his assessment that the statement was actually intended for Herzog and his party.

In that case, the person most likely to be tossed out of the government is Bennett. Maybe that's why Bennett instructed two members of his party, Shuli Mualem and Betzalel Smotrich, to absent themselves from the vote on the opposition’s Social Workers Law, ensuring that the law had a majority. Their explanation for this defiant move was that they were protesting the slow pace of construction in Judea and Samaria. In reality, they were also signaling to Netanyahu that in a coalition of just 61 members, it is not worth his while to provoke HaBayit HaYehudi, and certainly not before the budget is approved.

Regardless, the budget is expected to be approved, and to satisfy Habayit HaYehudi as well. This is true, even though Bennett knows that as soon as the new budget passes, his bargaining position in the government will take a hit, and he will become the coalition’s weak link.