Netanyahu coalition's days may be numbered

The natural gas fiasco, in which Prime Minister Benjamin Netanyahu had to withdraw his proposed outline from a Knesset vote, is yet another sign of the fragility of his coalition. 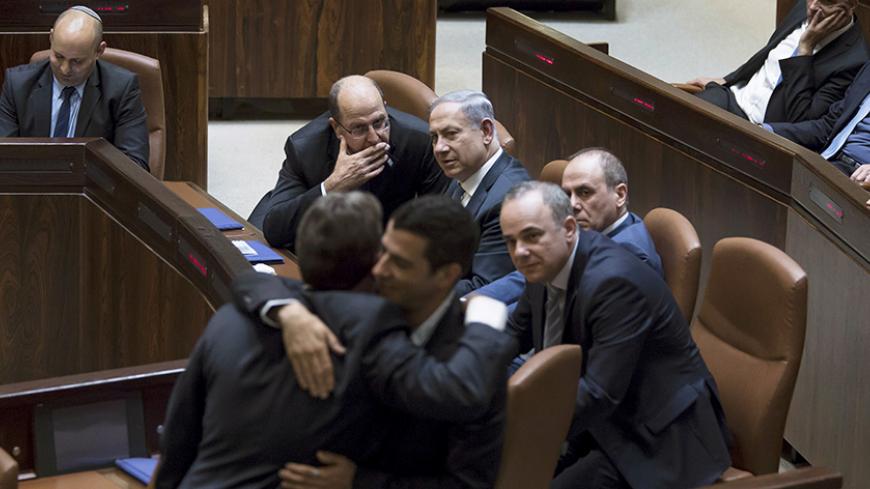 Israeli Prime Minister Benjamin Netanyahu (C) sits next to his Defense Minister Moshe Ya'alon (L) during a swearing-in ceremony at the Knesset, the Israeli parliament, in Jerusalem, May 14, 2015. - REUTERS/Jim Hollander

Former Finance Minister Yair Lapid has been saying in recent private conversations that it is by no means far-fetched to predict that the fourth Netanyahu government will not last even a year and that elections will be pushed up to the winter of 2016.

On the face of it, this is, of course, wishful thinking on the part of someone whose party's electoral strength shrank from 19 to 12 Knesset seats in the last elections and is forced to constantly fight for a front-row seat on the crowded opposition benches. But the assessment by the Yesh Atid chairman of a fragile government was bolstered this past week by the battle over the future allocation of proceeds from the harvesting of Israel’s offshore natural gas resources.

The discovery a few years ago of natural gas fields near Israel's shores has presented the state with the need to balance public interests against those of the gas companies, regarding the distribution of the gas (local use versus export) and benefits. After long negotiations, Prime Minister Benjamin Netanyahu decided to present the outline of a compromise. Contrary to Netanyahu's expectations, he failed to secure the Cabinet's approval.

It started with an ambush by Economy Minister and Shas Chairman Aryeh Deri at the June 25 debate on the issue by the Foreign Affairs and Defense Cabinet. Approval of the gas regulation by the Cabinet meant designating the issue a matter of national security, thus enabling the government to bypass its anti-trust commissioner, who opposes the proposal.

By law, the economy minister is authorized to assume the powers of the anti-trust regulator in such cases, but Deri refused to override the commissioner’s authority. The power was thus handed over to the entire Cabinet, but the law requires technical Knesset approval for such a move.

In the normal course of things, Deri should have notified the prime minister in advance of his intentions. But the Shas chairman, who has his eye on socially minded constituents, took advantage of Netanyahu and forced him to show up at the Knesset and hand over the decision to the plenum, where his coalition enjoys only a marginal majority.

At this point, things became even more complicated. Netanyahu discovered that he lacked the votes to secure a majority, because in addition to Deri, three other ministers — Finance Minister Moshe Kahlon, Housing Minister Yoav Galant and Social Welfare Minister Haim Katz — informed him that they were prevented from voting due to a conflict of interest. At the height of the crisis, Netanyahu tried to threaten to turn the vote into a no-confidence motion in his government (which could actually topple the government). When Kahlon and Katz warned him that they would nonetheless recuse themselves from the vote and Deri vanished, Netanyahu gave up.

Had the vote gone ahead, Netanyahu would have found himself on Monday night at the head of a transition government and been forced to move up the elections.

The sense of the fourth Netanyahu government’s transience was compounded by the goings-on in the opposition at the same time. Former Foreign Minister Avigdor Liberman, until recently Netanyahu’s senior coalition partner and nowadays on a crusade to bring him down, explained that he actually supports the gas-regulation plan but has no intention of serving as a political trampoline to save the coalition. He’s right. But Liberman enjoys making Netanyahu’s life miserable, and he delayed the announcement of his decision until noontime Monday — lulling Netanyahu into believing that he would vote with the prime minister.

Behind the scenes, the Liberman-Lapid axis was a hive of activity. Like Liberman, Lapid does not rule out supporting the gas plan, the formulation of which began during his tenure at the Finance Ministry, but he doesn’t intend to save the prime minister’s narrow 61-seat coalition, either. The two coordinated their moves all along, consulting and advising and enjoying the sight of Netanyahu’s agony.

This aside, it is virtually an open secret that these two maintain a pleasant, ongoing relationship with none other than Kulanu Chairman Moshe Kahlon, Netanyahu’s powerful finance minister, who has recused himself from dealing with the gas issue due to a conflict of interest (a friendship with the owner of one of the gas companies).

Netanyahu has long been convinced that behind his back, this trio — which coordinated against him even before the last elections — never shelved its plan to unseat him and to anoint one of the three in his stead.

In this case, the well-known saying that just because you’re paranoid doesn’t mean you don’t have enemies is quite apt for the situation. Netanyahu's fear could be justified and fits in with the familiar political assessment that the three will work together ahead of the next elections.

That is why Monday’s events at the Knesset were dramatic, in every sense of the word. Netanyahu got another glimpse of the dangerous future of his narrow coalition. Contrary to the rosy forecasts that the coalition would become more committed and united given that each of its members’ votes is crucial to prevent its downfall, this week proved this reasoning faulty.

Netanyahu’s concern was justified for the very reason that the Knesset vote was a technical one. What will happen when a substantive issue comes up for a vote? After all, Netanyahu found out this week that it’s each man for himself, for his constituents and for the next election campaign. He also clearly realized that he lacks any deterrent power among his ministers and cannot rely on them.

Even when the Knesset’s legal adviser, Eyal Yinon, issued an opinion allowing these three ministers to take part in the vote, they opted to ignore it and leave the prime minister injured on the roadside.

This obviously reflects the nature of the relationship between Netanyahu and his coalition partners. There’s no love lost there, no friendship, no sense of togetherness. Netanyahu discovered, for the umpteenth time, that despite the 30 Knesset seats he obtained for the Likud Party, he is all alone.

Looking at the timeline, it is clear that Netanyahu will not be able to keep going for long with the current coalition and its conduct, especially with the ticking time bomb of the two-year budget approval ahead. All signs point to the political, not to mention populist, circus waiting in the wings when negotiations over the budget begin.

The main coalition players act as though they are in the midst of an election campaign. The discourse is one of news headlines. Unfortunately, only a few months after the elections, the prime minister lacks the ability to govern. Even the likelihood of bringing in additional parties to form a broader-based coalition is turning out to be slim. Lapid and Liberman are focused on bringing Netanyahu down. The Zionist Camp is embroiled in internal power plays and could well find itself holding primaries for the party leadership, shutting the door for good on joining the government. Let's not forget that the Zionist Camp, in its current makeup, is an opposition party. Its current Knesset faction includes many young members who entered politics following the 2011 social justice protests and for the most part identify with the political left. This is no longer the party of former Prime Minister Ehud Barak and former Minister Binyamin Ben-Eliezer, two veteran politicians who easily dragged the Labor Party (today's Zionist Camp) into a right-wing government. Under these circumstances, Lapid’s assessment suddenly doesn’t seem so far-fetched.