Does Israel's economy minister know the election is over? 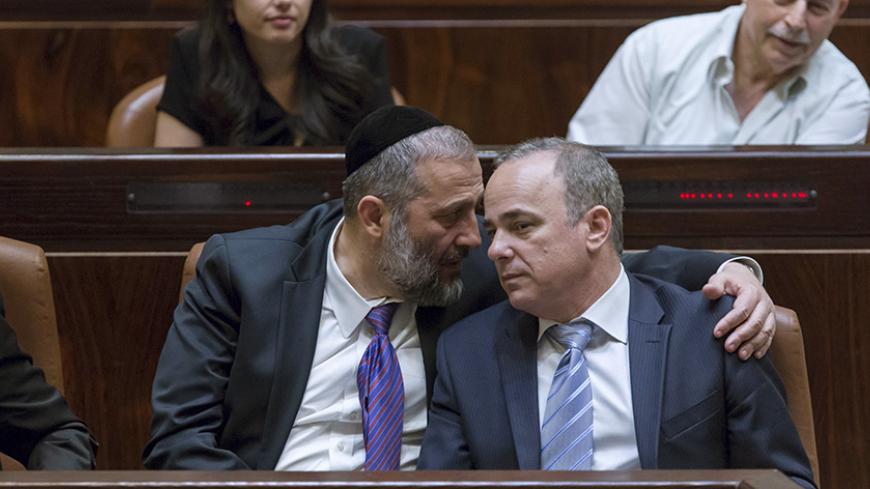 Israel's new economy minister and leader of the Ultra-Orthodox Shas Party, Aryeh Deri (L), speaks to Yuval Steinitz, the new energy minister, during a swearing-in ceremony at the Knesset, Israeli parliament, in Jerusalem, May 14, 2015. - REUETRS/Jim Hollander

In the late evening of Sept. 2, a short while before the Knesset was to vote on the 2015-16 budget, Shas Chairman and Economy Minister Aryeh Deri convened an urgent meeting in his office of his party’s Knesset faction. Seeming to suggest that the Shas Party approval for the budget was uncertain, Deri injected a measure of additional drama into already tense government efforts to win approval for the budget with only a narrow parliamentary majority of 61 members out of 120 Knesset seats. Eventually, the Shas Knesset members voted in favor, with Deri absenting himself after having made an offset arrangement with an opposition lawmaker.

In response to questions about what exactly went on in the economy minister’s office and what the fuss was about, Deri’s people issued a written explanation. In an announcement sent to political affairs correspondents, a senior, unnamed Shas official was quoted as explaining that members of the Shas Knesset faction had voiced anger that the issue of zero sales tax had not been settled yet with Finance Minister Moshe Kahlon, even though it was agreed on when the Cabinet discussed the budget. Deri called the urgent meeting to address their anger, explained the anonymous senior source, and instructed the members of the Knesset faction to vote in favor of the budget when it comes up for its first reading. “If agreement on zero sales tax for the weakest populations is not reached by the time the budget comes up for its second and third readings, Shas will withhold final approval of the budget,” the source wrote in his message.

Anyone who is familiar with the conduct of the Shas Party since it reverted to Deri’s control — and especially since the current government took office — cannot but snigger at the story about “the anger” of the Shas Knesset members as told by the senior source speaking on their behalf. After all, under Deri’s leadership, he and only he has the final say — he’s the one who gets enraged, who navigates, who decides. It’s a one-man show. The angry senior official was more than likely Deri himself, who wanted to place himself and Shas at the center of the budget debate and portray them as the ones looking out for the welfare of “transparent” Israelis — the country’s poor who were the focus of Deri’s election campaign for the March 17 elections.

Deri had no intention of derailing any vote. He also knew that after the first round of voting, final legislation is a long way off. It should be noted that in Israel, every bill must be approved in three readings. The second reading includes separate voting on every clause of the bill. Not only that. Kahlon, as far as anyone knows, had no intention of backtracking on his agreement with Deri. But as always with the minister of economy, there’s nothing that says presence and control like a cute little media drama.

“The truth is that we were expecting some sort of drama on Deri’s part on the night of the budget vote, so we weren’t that impressed,” a source close to the prime minister told Al-Monitor on condition of anonymity. “We are used to his shenanigans. In the case of the budget, it’s nonsense. He wanted a headline and got it. But with the gas issue [the natural gas outline on resource and benefits distribution], it’s a real problem.”

The extent of the economic minister’s troubling behavior in the unending natural gas saga can be discerned in his zigzags and lack of coherence in recent months.

At the dramatic June 25 meeting of the foreign affairs and security Cabinet to discuss the defense and geopolitical ramifications of the blueprint for developing Israel’s natural gas reservoirs, Deri stirred up a storm. After defense officials explained the geopolitical importance of promoting the gas export contracts with Egypt and Jordan, the plan was unanimously approved. But then Deri announced that he has no intention of exercising his legal authority as economy minister to circumvent antitrust commissioner professor David Gilo, who had voiced objection to the government’s plan. Prime Minister Benjamin Netanyahu was surprised and furious. Deri, for his part, looked like someone who was enjoying the planned sabotage he had cooked up for the prime minister. Those who rushed to praise Deri were the Knesset members who oppose the natural gas blueprint, arguing that it gives in to the tycoons instead of allowing the public to benefit from a natural resource it owns.

But surprise once more. At an Aug. 16 government meeting to discuss an amended gas plan, Deri voted in favor. But Deri’s rabbits keep coming out of his hat fast and furious, and he subsequently announced once again that he was leaning against exercising the authority provided to him by law to bypass the antitrust commissioner and was inclined to wait for the appointment of a new commissioner at the end of September.

Deri dropped his “small” bombshell during a laid-back conversation with reporters covering parliamentary affairs, and even referred to the dramatic Cabinet meeting in which he had surprised Netanyahu. “Netanyahu was right,” Deri told the reporters. “What I did to him was not fair. Netanyahu made all the changes that I asked for as a condition of approving the plan. But had I announced in advance that I would not sign off, no one would have believed me that this was not some sort of combined deal between me and Netanyahu. I am full of admiration for the way Netanyahu controlled his anger at me.”

Reading these comments, it’s hard to shake off the feeling that the minister of economy is busy from morning to night dreaming up ploys and conspiracies, while at the same time shirking responsibility as economy minister for one of the most significant economic issues for the State of Israel. On Sept. 7, the Knesset is expected to convene in a special recess session to vote on a government proposal that would allow it to assume Deri’s authority to circumvent the antitrust commissioner.

“It’s impossible to know what Deri wants,” a senior official in Netanyahu’s office told Al-Monitor on condition of anonymity. “The prime minister truly likes him, but each time there’s something else with him. Now he wants to wait for the next commissioner. That means the plan will be buried. Whenever things reach the end point, he runs away. Deri also knows that if the gas plan blows up in our face, the prime minister will take all the flack, so that he enjoys the best of all worlds. The Egyptian gas discovery should make clear that we don’t have too much time left.”

Another one of Deri’s little games was revealed this week at the conference of the financial daily Calcalist. Energy Minister Yuval Steinitz recounted there that Deri refused to hand over (to him) responsibility provided by law for the gas issue so that no one would accuse him of evading responsibility. “I don’t understand how someone can say he supports the gas plan and that delays are harmful, and then not sign. With a doctoral degree in philosophy [and as someone] who taught logic, I don’t understand this.”

So what does Deri want? A senior minister told Al-Monitor on condition of anonymity, “At the end of the day, the economy minister has to make decisions and not avoid responsibility. One gets the sense that he is only interested in making headlines and does not want the responsibility that comes with the job of economy minister. He wants the best of all worlds. As far as he’s concerned, the [election] campaign is still underway.”