Faulty record-keeping in Egypt's military court system could have landed a little boy in jail. 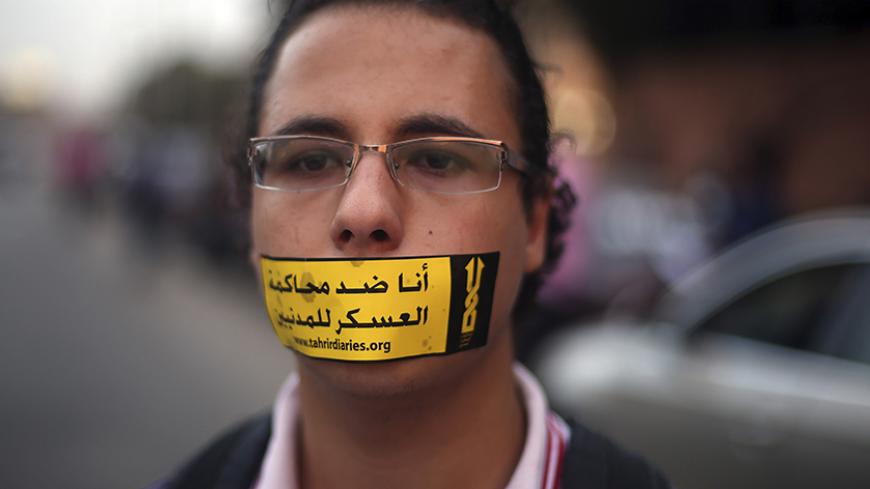 A demonstrator looks on with a sign reading "I am against the military courts for civilians" taped over his mouth during a protest in front of El-Thadiya presidential palace in Cairo, April 23, 2014. - REUTERS/Amr Abdallah Dalsh

Mansour al-Qurani never suspected that a small mistake — a mistake not even of his own making — would put his family’s fate in danger. Yet last month, his 4-year-old son was sentenced to life in prison for supposedly participating in a deadly riot in 2014.

It took five days and the family's appearance on TV to convince the military a mistake had been made.

An official in charge of conducting criminal investigations accidentally included the little boy's name on a list of 116 alleged offenders. A military court in Cairo delivered his sentence Feb. 16.

The father told Al-Monitor that he found out about the ruling through the media and that security forces tried to carry out the judgment. He said he had to submit his child’s birth certificate to prove that the investigators’ information was not true. The family was forced to leave their home.

“My family and I were in danger until I went on TV to talk about this,” he said, noting that the show shed light on the case. After the program aired, the family returned to their home, waiting for a decision ordering a retrial.

The armed forces spokesman admitted in an official statement issued Feb. 21 that the name of the child was mistakenly listed on the bill of indictment, and that a 16-year-old with a similar name should have been charged instead.

Investigators don't have to follow specific procedures to obtain information, according to the Code of Criminal Procedure. However, officials overseeing the investigations must approve of the methods used in writing, which makes it easier to find the people responsible when a mistake is discovered.

Eid Sayed Izz el-Din, the child’s lawyer, told Al-Monitor he believes the officials in charge hired incompetent investigators. As a result, several mistakes were made, like the age and address of the child being recorded incorrectly. Nevertheless, when the investigation reached the national security apparatus, they approved it and referred the case to the military court, which also accepted it.

Ahmad Heshmat, a defense lawyer who has worked on several similar cases, told Al-Monitor, “There are multiple agencies investigating and collecting information, most importantly the State Security Investigation Services affiliated with the Ministry of Interior. Regarding political cases, investigations are conducted by the national security apparatus.”

He added that officials in charge of the investigations often do not care about the accuracy of the incoming information and refer the reports directly to the public prosecutor as verified facts. Heshmat, however, said this does not necessarily apply to investigations carried out by the intelligence services.

According to Heshmat, it is possible for a bill of indictment to include a whole family, based on wrong information resulting from lack of documentation or proof. Nevertheless, the military prosecution refers these investigations to the court without re-examining them.

“Military trials are not governed by controls and standards that ensure justice. Sometimes, the defense attorneys are not allowed to examine the case documents or even meet with the accused, and they might not even be permitted to attend the hearings. The judge isn’t obligated to listen to the defense’s pleading, like in civilian trials,” he added.

Heshmat explained that until the law governing military trials was amended in 2012, judgments were not even subject to appeal. The amendment introduced a higher level court to examine the appeals lodged against military judgments, except those issued specifically by the Military Criminal Court.

Under Article 204 of the current constitution, civilians shall face trial before a military court for crimes that constitute a direct assault against military facilities or armed forces personnel as they are performing their duties.

Raafat Fouda, head of the general department of law at Cairo University, told Al-Monitor that Article 204 expanded the scope of powers of the military judiciary to include military academies, civilian workers in military factories, intelligence officers and journalists in specific publication cases. Beginning in 2014, public and vital facilities — such as power stations, railways, roads and bridges — were deemed military facilities, and anyone who vandalizes them is referred to the military court.

Activist Sarah al-Sharif, a member of the No Military Trials for Civilians campaign, stressed to Al-Monitor the need for a constitutional provision that prevents civilians from appearing before military courts, which she said lack adequate protection for civilians' rights.

Sharif added that judges appointed by the defense minister are both “the litigant and judge” when a civilian appears before a military court. She cited many gross violations in the case of Qurani’s young son. She noted the boy's file was seen by a military investigator, a military prosecutor and a military judge — and none of them questioned it.

Rulings made by military courts — with the exception of death sentences — are deemed final once they are ratified by Egypt's president or an official authorized by the president. Before that time, however, the president or his appointee may cancel or modify the judgment or request a retrial. Heshmat said this is contrary to the principles of ​​fair trials, and most military judgments are ratified by the head of the Central Military Region (which includes Cairo), who is not a legal specialist.

Heshmat stressed that the conditions under which judgments are ratified undermines trust in military rulings. He explained that civilian courts have developed an appeals system, but ratification by an officer who is not a law specialist is not based on any sound legal ground and must not be accepted.