Mohamed Attiya, the founder of the "Ban the niqab" campaign, speaks to Al-Monitor about why he supports banning niqabs in state institutions despite the criticism the campaign has received. 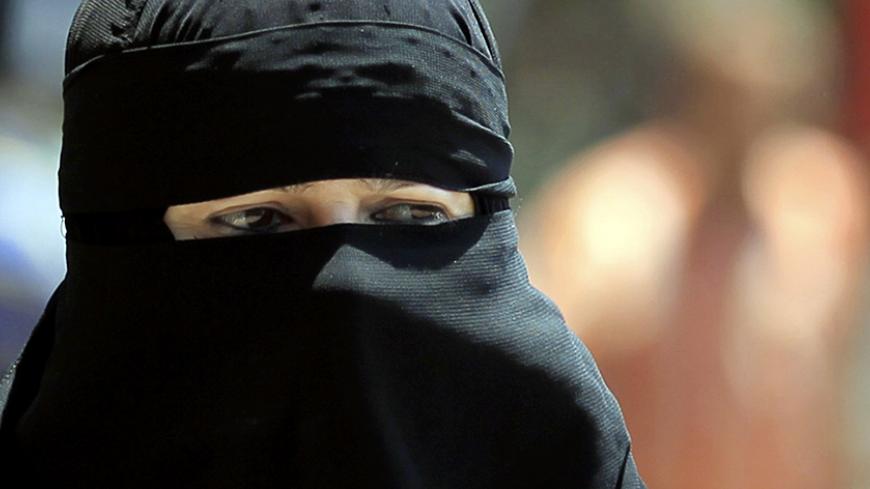 CAIRO — A new campaign titled “Ban the niqab” was launched in Egypt earlier this month, calling for a ban on the full face veil in all state institutions, including universities, public hospitals, schools and government departments.

The campaign was strongly criticized by some Islamic clerics, who believe that wearing the niqab is a virtuous act by women and banning it is not permissible. Meanwhile, others argued that the campaign was not directed at Islam, saying that the niqab is merely a tradition unrelated to religion that should be removed.

In an interview with Al-Monitor, Mohamed Attiya, the campaign’s founder, said that the reason he launched the campaign was the volatile political climate in Egypt and the attempts made by the Muslim Brotherhood and its supporters to cause chaos and panic among Egyptians by carrying out terrorist attacks against state institutions. He believes the campaign will prevent terrorists from exploiting the niqab to conceal their identities to carry out attacks.

Attiya — who served as coordinator for “No to Islamist Parties,” a popular initiative launched last year to urge a boycott of Islamist parties — responded to those accusing the campaign of interfering with public freedoms guaranteed by the constitution, saying that the “campaign does not at all violate public freedoms. We respect the constitution that guarantees every person’s freedom to wear whatever they want. However, workplaces can determine the outfits they want their employees to wear during work. This is why we only want to ban the niqab in workplaces and not on the streets.”

Al-Monitor:  What is the purpose of launching the "Ban the niqab" campaign?

Attiya:  The campaign’s objective is to ratify a legal legislation to ban wearing the niqab in all government departments, schools and hospitals affiliated to the Ministry of Health, as well as service and sovereign ministries, in order to prevent any attempts to stir confusion and chaos by carrying out terrorist acts.

For example, the Ministry of Religious Endowments arrested a young man wearing a niqab last week in a mosque in Cairo. He was begging and violating Sharia. This is why it was necessary to stop and arrest him.

Al-Monitor:  How do you respond to those who objected to the campaign because they consider wearing the niqab falls within the scope of public freedoms guaranteed by the constitution?

Attiya:  Recently, there were many terrorist attacks in Egypt that targeted army and police officers, civilian sites and Egyptian museums. The current political climate is disturbed. This is why we should take all necessary precautions to prevent any attempts that may affect the state’s security and stability. The niqab is one of the means that some people might exploit to carry out terrorist attacks.

This campaign does not at all violate public freedoms. We respect the constitution that guarantees every person’s freedom to wear whatever they want. However, workplaces can determine the outfits they want their employees to wear during work. This is why we only want to ban the niqab in workplaces and not on the streets. Women are free to wear the niqab outside of work, but we must be able know their identity if they are working in governmental institutions.

Al-Monitor:  What mechanisms is the campaign using to spread its idea?

Attiya:  In the coming days, we will be organizing field trips to different governorates around Egypt to hold conferences and seminars, as well as sessions with student unions in Egyptian universities to listen to students, talk to them and convince them of the campaign’s idea and goal.

At the same time, we seek to address each member of the parliament, in order to put the campaign’s idea forward and convince them of it so the parliament would adopt it. We want a legal legislation that prevents wearing the niqab at work, especially since many members of parliament welcomed our idea, to the point that some believed it to be serving Egypt's national security.

Al-Monitor:  You met with Dr. Gaber Nassar, the president of Cairo University who in September 2015 issued a decision to ban faculty members from wearing the niqab. What was the outcome of this meeting?

Attiya:  We met with Nassar to declare our position in support of his decision to ban wearing the niqab for faculty members and all those working in the hospitals affiliated to the university.

Nurses who provide health care to patients should not hide their faces; smiles help patients feel better. This is why we wanted to sit with Nassar to express our support of his decision and pressure the government to implement it.

Al-Monitor:  A group of professors appealed Nassar’s decision, but it was upheld this January by a court ruling. Why do you think the government has yet to implement the court ruling?

Attiya:  I believe it is not implementing it for fear of the reactions in the streets. Some consider the niqab as part of Sharia and thus banning it represents a flagrant violation of Islam. But this is not at all true because the niqab is only an Egyptian tradition and not a form of worship; it has nothing to do with religion.

Al-Monitor:  What is Al-Azhar’s position regarding the campaign? Have you discussed the campaign with Al-Azhar officials?

Attiya:  No, Al-Azhar has yet to comment on this idea, but we respect Al-Azhar’s opinion whether it agrees with ours or not. However, I would like to note that the Egyptian Ministry of Religious Endowments, which is the authority in charge of organizing work in mosques and choosing the imams who give sermons, believed the niqab was only a tradition and it is not imposed on any Muslim woman. This was expressed by Dr. Muhammed Mukhtar Jumaa, minister of religious endowments, who said that banning the niqab is legal.

Al-Monitor:  How do you respond to those accusing the campaign of inciting divisions?

Attiya:  Indeed, we were fiercely attacked by the Salafist movement and the Salafist call. Some called me an infidel and a supporter of the secular movement that conflicts with the teaching of the Islamic religion. They said I was not religious and my goal was to erase the Islamic identity, along with other accusations that I did not respond to. I am a Muslim, and I am proud of my religion. No one has the right to call me an infidel.

The rumors about the campaign increasing divisions are not true. When I started the campaign, I decided that I would not get any support from the church, so that the campaign would not have a sectarian aspect. All those participating in the campaign are Muslim youth who have a true understanding of religion.

Al-Monitor:  Did any party in the state announce that it had adopted your initiative and is willing to implement it?

Attiya:  Of course not. Our campaign is a popular campaign, and it will remain this way. It is succeeding thanks to popular efforts. We did not coordinate with any party in the state to support us.