The president of Cairo University has declared that faculty may not teach while wearing the veil, a move that many call unconstitutional and fear will create more problems. 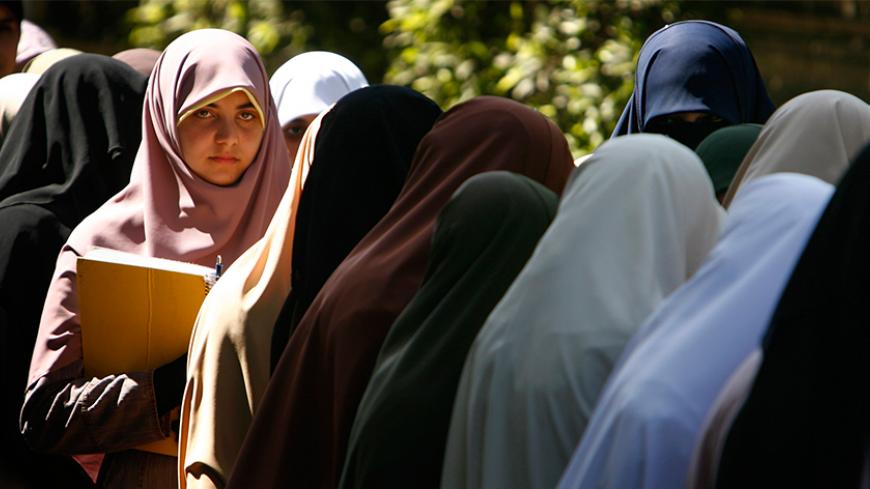 Egyptian students stand in a line during a protest inside Cairo University, March 21, 2007. - REUTERS/Goran Tomasevic

Cairo University President Gaber Nassar issued a decision Sept. 29 prohibiting veiled faculty and assistants from teaching. Nassar said students have complained that the veil keeps instructors from communicating effectively and that the decision was made in the public's interest. Veiled teachers are prohibited from lecturing, giving theoretical and practical lessons, or attending laboratory sessions and practical training.

The decision sparked a wave of controversy. Supporters of the ban include the fledgling Egyptian Secular Party, which called Oct. 6 for a law doing away with the niqab in Egypt. Opponents such as the Salafist Dawa in Alexandria, the religious authority of the Nour Party, reject the decision as a “violation of the constitution and the law and discrimination against a certain category for its religious doctrine.”

In this context, Nassar said in a Sept. 30 press statement, “The university administration has received reports from certain deans concerning a problem in communication between students and veiled faculty members, since facial expression is essential to the educational process, and the decision violates neither Sharia nor the constitution.”

The statement continued, “It is easy to compensate for not seeing facial expressions by using other means of communication, in addition to the usual display of videos and PowerPoint presentations,” adding, “The term ‘public interest’ mentioned in the decision is vague and unclear. If it means the security factor within the university, the veiled faculty members are identified when they enter the university by female police officers, and none of us mind this security procedure, which contributes to providing a safe learning environment for our students.”

Abdel Moneim Shahat, a spokesman for the Salafist Dawa, called the decision illegal and told Al-Monitor a previous attempt to ban veils did not end well for the school's top administrator. In 2010, when then-President Hossam Kamel issued a similar decision, Safinaz Ibrahim, an assistant professor of pharmacy, filed a lawsuit. The administrative court told Kamel to cancel the rule. When he refused, he was fired and ended up in prison for three months, Shahat said.

He noted, “Seventy-seven requests were submitted to law professor and lawyer Ahmed Mahran for the defense of veiled faculty members by many unveiled professors, who believe the decision is a flagrant provocation of freedoms in the constitution." He pointed out that “Cairo University forced some teaching assistants to write a pledge to abide by the decision … then they filed a lawsuit against this injustice.”

The presidents of other universities "refused to take the same path as Nassar out of respect for the previous judiciary provisions and their unwillingness to enter a losing lawsuit,” Shahat said, noting, “Nassar’s claims of receiving complaints from students for their inability to communicate with veiled faculty members is negated by the great student turnout in lectures given by veiled professors, despite the fact that in some of these lectures attendance is optional. In addition, many countries around the world have the option of learning remotely by using CDs or the Internet.”

Shahat warned about “taking this tension to the Egyptian street ahead of the parliamentary elections due in November, because this ban may also push veiled students to take escalatory measures, fearing that the ban on the niqab could also include them. Religiously committed youth might feel that there is a double standard, as the state does not take any steps against women who wear makeup.”

Nassar’s measures, Shahat said, could open the door to complaints from these religious students that their professors’ or classmates’ clothing is "indecent" and distracting, preventing the students from focusing on their education. "Then we would enter a vicious cycle,” he said.

In an interview with Al-Monitor, the former head of the fatwa committee at Al-Azhar, Ali Abu al-Hasan, criticized the ban, and said, “This decision was not thought through. Nassar’s claim that it was an administrative decision is void, because as long as it is associated with a legal judgment that is out of his domain, he should have [deferred to] religious scholars.”

He added, “Islamic law requires men and women to cover their nakedness; Islam has imposed the veil on women so as not to fascinate men. In certain cases, the niqab is obligatory if a woman is very beautiful. Some women may not be very beautiful but wear the niqab, and thus they would be making the best decision so men would not be fascinated by them, and they will be rewarded for it."

Amna Nasir, dean of the faculty of Islamic studies at Al-Azhar University, noted in an interview with Al-Monitor, "The niqab is far from being related to Islamic legislation. It is only a Jewish legislation derived from the Old Testament,” adding, "The Jews made this habit popular before the emergence of Islam in the Arabian Peninsula.” She continued, “When Islam came, it imposed on Muslim women dark and loose clothes that do not draw attention; it did not oblige women to cover their face, but men to turn a blind eye.”