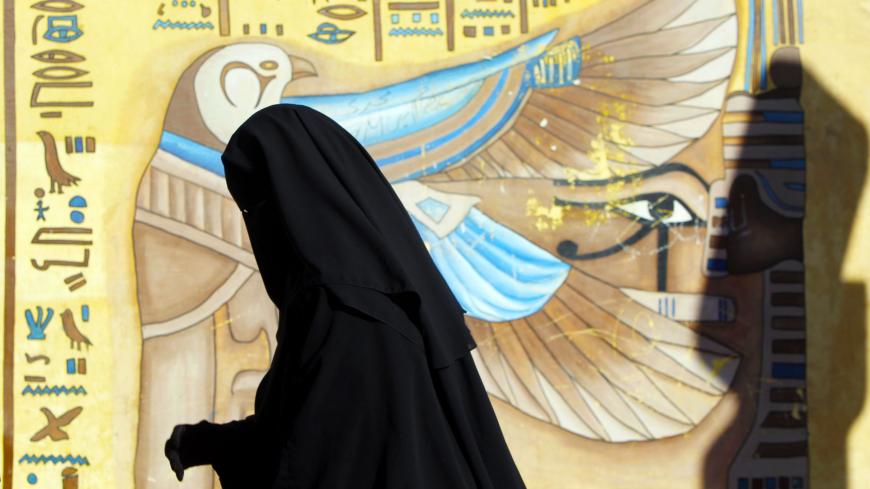 A woman wearing a niqab stands near a hieroglyphic mural in el-Dokki district of greater Giza, south of Cairo, Dec. 22, 2012. - REUTERS/Amr Abdallah Dalsh

Courts and the law
Education
February 5, 2020

After five years of public debate, Egypt's top court has settled the issue: Cairo University, one of Egypt's oldest higher education institutions, can ban its professors from wearing full-face veils, or niqabs, inside lecture halls. The ban does not apply to the rest of the campus.

The High Administrative Court ruled Jan. 27 that, while a person's choice of attire is among the personal freedoms guaranteed by the constitution, this freedom is not limitless and should not contradict public morals. The court noted that the Regulation of Universities Law doesn’t require staff members to don uniforms, but does demand that they abide by university traditions. With its ruling, the court rejected the appeal by some 80 of the schools' teachers who challenged the ban.

The next day, Cairo University media adviser Mahmoud Alam Eddin told CBC News that the niqab ban in lecture halls would be implemented by Feb. 8, the start of the second semester. Professors who don't comply won't be allowed to teach, he added.

The controversy arose five years ago when Gaber Nassar, former president of Cairo University, called for the prohibition. Nassar said back then that the veil hinders clear communication with students, especially during academic lectures.

In 2018, legislator Ghada Ajami proposed a draft law that called for banning all women from wearing the niqab in public places such as restaurants, universities and parks and called for violators to be fined 1,000 Egyptian pounds ($63) or more.

Ajami described the niqab as a source of sedition in society, as it reflects the extremist ideology of ultraconservative movements. She said the ban would help combat terrorism. But after backlash over the proposal, Ajami gave up the effort, acknowledging a ban might cause divisions in the country.

That same year, Mohamed Abu Hamed, another lawmaker, called on the prime minister to ban the full-face veil in state and educational institutions, similar to action taken in Algeria. But many parliamentarians rejected his call, saying it would restrict personal freedom.

Cairo University is not the first institution to succeed in barring its staff from wearing the niqab. Al-Azhar, Egypt's top religious authority, made the call in 2009.

The former grand imam of Al-Azhar, Sheikh Mohammed Sayyid Tantawi, issued a decision to ban female staff and students from donning the niqab at the university, even in dormitories. Tantawi said the full-face veil is a sign of radicalism and has nothing to do with Islam.

There are supporters and opponents of the ban at Cairo University and in the general public. The Revolutionary Socialists, a movement established in 2011 after the January 25 Revolution, rejected the court's decision.

It said in a statement on Facebook, "We must defend women's right to choose their clothing." The university should pay attention to "factors that actually affect the educational process and the ability of a faculty member to deliver knowledge, not her appearance."

Lawmaker Dalia Youssef hailed the recent ruling and called for extending the ban to include students as well, to help shape Egyptian society’s way of thinking.

“I asked the minister of higher education [and the Ministry of Health] to issue a decision that applies to all universities," she said by phone on an al-Haya TV talk show Jan. 28. "The matter doesn’t require a draft law, as there is already a court ruling.”

Shaimaa Mousa, an assistant lecturer in Greek and Latin studies at Cairo University's School of Arts, told Al-Monitor she totally agrees with the ban.

“Actually, I am against the niqab, whether in or outside the university. How can I communicate with a person who is fully veiled except for her eyes?” Mousa said. “The face and body language are among the most important tools of communication."

However, Mousa noted that niqab wearers may find ways to circumvent the ban, as one ultraconservative Muslim recently suggested. Sameh Abdel Hamid, former leader of the Salafist Nour party, said Jan. 28 on Facebook that niqab-wearing staff at Cairo University should instead wear medical masks in lecture halls. He claimed the masks have many benefits, like avoiding the coronavirus. “The law will not prevent the use of masks,” Abdel Hamid said.