The emergency conference on diplomacy organized by former Ministers Avigdor Liberman and Yair Lapid presents them as political allies of the opposition parties. 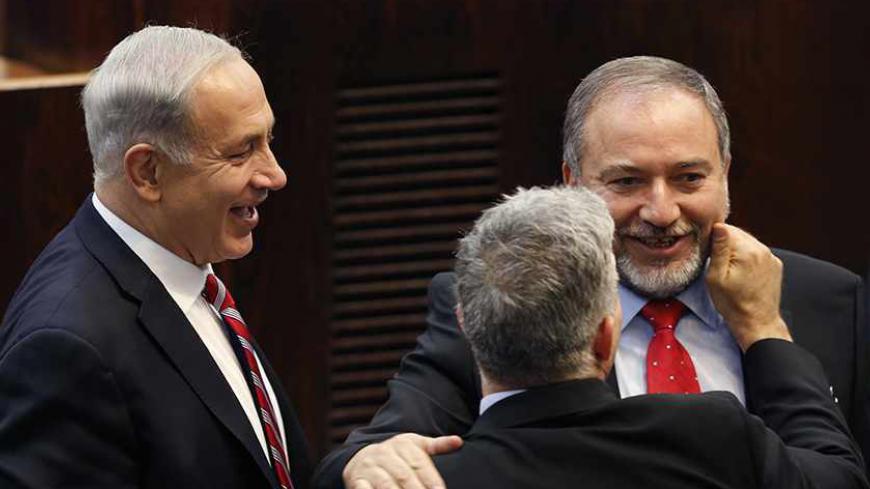 “Fat chance,” is how Avigdor Liberman, the chairman of the Yisrael Beitenu Party, reportedly related to the possibility that in the next elections he would team up and form a joint slate with Yair Lapid, the chairman of the Yesh Atid Party. After organizing the Feb. 29 conference with Lapid under the heading “Fighting for Israel’s international standing,” Liberman has been repeatedly asked that question. At the conference, held at the Knesset to great media attention, the two gleefully took potshots at Prime Minister Benjamin Netanyahu, who also serves as the foreign minister.

Liberman and Lapid sought to distance their public move from far-reaching partisan contexts, explaining that they teamed up ad hoc for a very specific reason, namely to salvage what is left of Israel’s diplomacy, which they charge Netanyahu has been systematically destroying. “The Foreign Ministry is nobody’s private domain, not even the Netanyahu family,” the leader of Yisrael Beitenu lashed out. “Netanyahu is trying to take Israel’s foreign service and physically destroy it. … This government has no foreign policy,” he said. Looking very serious, Lapid said, “Our international standing has never — in all the years of the country since 1948 — been so bad.”

What the prime minister saw upon analyzing this move is leaders from two opposition parties, which in recent months have seen a spike in the polls, teaming up against him. Identifying the political threat, he quickly fired back. Trying to discount the importance of the conference, he offhandedly blurted at a Likud faction meeting that took place nearby, “I have heard that the left-wing parties held a political ‘emergency conference’ today. So some people opt to ramble endlessly and engage in political conferences and there are those who fend off the pressures on the State of Israel and strengthen its international alliances to safeguard our future here.”

The prime minister’s casual remark stood in stark contrast to the pressure and fear that have gripped him since learning about the conference. Both Liberman and Lapid served as ministers in his previous governments. The former is associated with the right, while the latter is supported by the centrist-left constituency but constantly keeps trying to take away votes from the moderate right. Ever since the March 2015 elections, the two have emerged as the opposition’s new power couple, fostering close and productive ties. The chemistry between the two is conspicuous, and they have been a source of great concern for the Likud’s chairman due to the potential damage they can cause if they run together in the next elections. Having both served in Netanyahu’s third government, they ended up being the prime minister’s arch rivals, vowing to do everything to topple him. Living up to their word for the time being, they remain in the opposition.

Netanyahu is known to overblow assessments concerning political threats. Oftentimes he makes a mountain out of a molehill, taking action to avert the threat. But this time around, is he attaching too much clout to the political nexus? It appears that when it concerns the Liberman-Lapid alliance, Netanyahu has very good reason to be on tenterhooks. As mentioned, the duo claims to have teamed up for a specific purpose — but this is obviously only part of the greater picture. This is an important political alliance based on interests and on identifying opportunities, from which the two stand to gain. By having a strong right-wing figure who will help him blur his leftist image, Lapid is signaling that as a candidate for the premiership he will be able to form a coalition. As far as Liberman is concerned, Lapid is giving him a seal of approval as an upright, “sane” Israeli politician. In this fashion, they both bolster their position vis-a-vis Netanyahu. But there is more to the story than meets the eye.

In fact, this is not an alliance whose sole objective is to bring Netanyahu down in the next elections. It also aims at undercutting the standing of Isaac Herzog, the chairman of the opposition and the chairman of the Zionist Camp. There is a reason that he was not invited to the party (namely the Knesset conference), even though it would have made sense, on the face of it, to have Herzog join the “topical” venture sponsored by the leaders of two opposition factions. After all, he, too, is concerned about Israel’s international standing. Had he been invited, the conference might have had a much greater public impact. But Herzog was left out. As a result, both his standing and his relevance took a hit. Lapid and Liberman want to take away votes from the Likud and having a public appearance with Herzog is the least helpful move, especially as hard as Lapid is trying to pass off as a non-leftist. Netanyahu accurately identified this vulnerability, turning Lapid and Liberman into “left parties” — as if this were a mark of shame.

It is highly doubtful whether Lapid and Liberman’s warnings about the collapse of the Foreign Ministry can cause Netanyahu any public damage. The Israeli public, mainly the centrist-right, is more preoccupied with security. When it comes to Israel’s international standing, it tends to demonstrate local patriotism and convey a sense that the whole world is against Israel, regardless of what it does. In recent years, Netanyahu has been re-elected time after time despite Israel’s declining international standing. In the short run, Lapid and Liberman do not pose a threat to Netanyahu, but this could be the start of a significant alternative to the Likud that isn’t coming from the left, and therein lies the real threat to the prime minister.