Turkey seems intent on using the Feb. 17 bombing in Ankara as a pretext to crush the fledgling Kurdish self-rule in northern Syria that serves as an inspiration to its own Kurds. 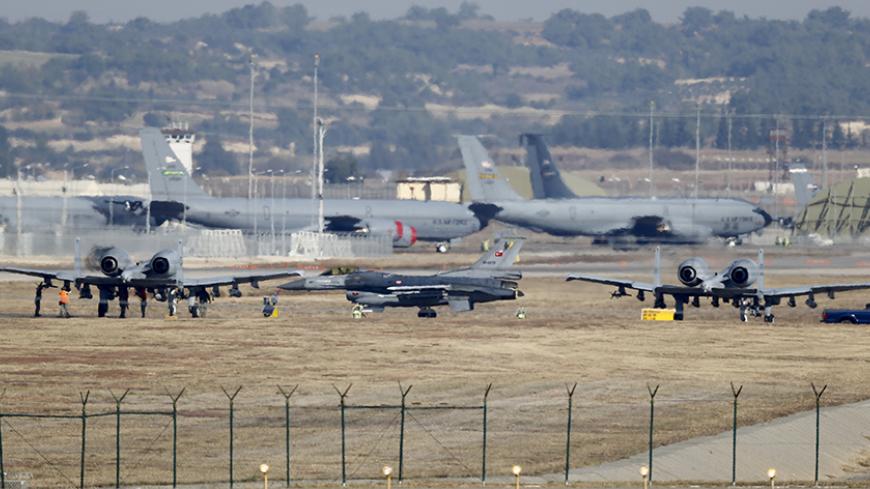 Looking back at Turkey’s failed peace process with the Kurds now that it has devolved into a bloody conflict also affecting Syria, the position of Kurdistan Workers Party (PKK) leader Abdullah Ocalan is perhaps best summarized through something he conveyed to lawmakers from the Kurdish-dominated Peoples’ Democratic Party (HDP) during a March 2014 meeting on the prison island of Imrali, where he is serving a life sentence. According to minutes of his meetings with the HDP team that began in 2013 and ended April 5, 2015, Ocalan said, “I have a family. My family — 5 or 10 million people — we rebelled. Now we want to make peace. How is this to be achieved? I want to give up the war. Do you agree?”

The minutes, since published as a book, indicate that the settlement talks were deadlocked, primarily because of the Democratic Union Party (PYD) and its accomplishments in neighboring northern Syria, or Rojava, as the Kurds call the area. The canton system established by the PYD appears to have prompted Turkey to reject Ocalan’s offer to “give up the war.”

Speaking in parliament Feb. 16, Prime Minister Ahmet Davutoglu slammed the People’s Protection Units (YPG), the PYD’s armed wing, for advancing to Azaz and openly threatened to strike it. “If they approach Azaz again, we’ll respond in the strongest fashion,” Davutoglu said. “If any attempt is made to use the [Menagh] airbase in the region against opposition forces or innocent civilians … we’ll render it unusable.”

Two days later, Ocalan, behind bars since 1999, was trending on Twitter under the hashtag “Serok Apo,” which means “Chairman Apo” in Kurdish. Why? The YPG had not only continued to advance in Rojava, but had captured the Minagh airbase that Davutoglu threatened to destroy and had reportedly renamed it Serok Apo.

Within hours, Davutoglu was blaming the YPG for the deadly bomb attack in Ankara the day before, vowing a strong response. President Recep Tayyip Erdogan also set out to convince the international community of the YPG’s guilt, ignoring PYD and YPG denials of responsibility. Reuters soon reported that 2,000 armed Syrian rebels had crossed from Turkey into Syria, heading to Azaz as reinforcement against the YPG.

Turkey’s stance against Syria and the Kurds marks a dramatic return to the tensions of 17 years ago, when Ocalan was captured, with one major difference: Turkey today appears headed for a debacle.

The chain of events that led to Ocalan’s capture began Sept. 16, 1998, when Turkey’s land forces commander openly threatened Damascus in a speech near the Syrian border. “I’ll put it plainly: Neighbors like Syria are misinterpreting our goodwill,” Gen. Atilla Ates said. “Turkey has done what it takes for good neighborly relations. If Turkey fails to get the response it expects, it will be entitled to take all sorts of measures. Our patience is running out.”

The threat stemmed from the safe haven Ocalan enjoyed in Syria. Turkey wanted him kicked out immediately. Two weeks later, President Suleyman Demirel threatened military action. “I declare once again before the world that we reserve our right to retaliate against Syria, which maintains its hostile attitude despite all our warnings and peaceful openings, and that our patience is about to run out,” Demirel said.

The pressure worked, and Ocalan left Syria on Oct. 9, 1998. He shuttled between Russia, Greece and Italy before ending up in Kenya, where a complex operation involving multiple actors landed him in Turkish custody on Feb. 15, 1999.

This marked the beginning of a speedy recovery in Turkish-Syrian ties, which climaxed in September 2009, when Davutoglu, then foreign minister, and his Syrian counterpart, Walid Muallem, agreed to create the bilateral High-Level Strategic Cooperation Council. “In the struggle against terrorism, we cooperate extensively with Syria today, just as we did in the past. The two countries are in full agreement on this issue,” Davutoglu said at a joint press conference.

So, how did the “full agreement” of 2009 devolve into a crisis in 2016? To better understand this turn of events, one must take a look at Ocalan’s vision of democratic autonomy.

Seventeen years ago, Turkey had a clear objective — to get Ocalan out of Syria. Mobilizing all its political, diplomatic and military might, it eventually managed to lock up Ocalan. Today, however, its threats toward Syria and Rojava rest on extremely ambiguous grounds. What exactly does Turkey want? To stop the YPG, which is part of the US-led international coalition, from advancing westward? To destroy the YPG, which it labels a terrorist group? To disrupt the canton system in Rojava? Given that Damascus itself is not fighting the YPG or opposing the cantons on its own soil, what justification does Turkey have for its opposition?

Turkey, it seems, intends to use the Ankara bombing for the strong justification it needs. Although the YPG denies being responsible for the attack, Turkey appears to be readying for war on Rojava. In fact, Turkey is waging war against Rojava’s democratic autonomy system, which the Syrian Kurds began building in July 2012 on theoretical grounds laid out by Ocalan.

In the summer of 2015, the Kurdish movement in Turkey moved to declare “democratic autonomy” in several towns after Ankara terminated the settlement process and launched military operations against the PKK. The Rojava model is, in fact, the matured version of the model the Kurdish movement espouses for Turkey.

Ocalan’s theoretical democratic autonomy framework has been embraced not only by the PYD in Syria, but also by the Kurdistan Party of Free Life (PJAK) in Iran and the Kurdistan Democratic Solution Party (PCDK) in Iraqi Kurdistan. Back in September 2011, before the YPG even existed, PYD leader Saleh Muslim told this reporter that the PYD wanted democratic autonomy from Damascus. “Just like our brothers [in Turkey], we don’t want to split but to live within the current borders — but freely,” he said.

Ocalan’s writings are viewed as a road map by the Kurdish movement. Ocalan maintains that ethnic and religious groups in the Middle East should be entitled to self-determination under an autonomous, decentralized governance model on the condition that they remain subject to the borders of current states. He frequently likens this framework to the European Union model, stressing decentralized governance versus dictatorship.

Since April of last year, Ocalan has been barred from having visitors. He had also been isolated in July 2012, when the foundations of the Rojava cantons were laid. This isolation is meant to prevent him from guiding his movement, but it has failed to diminish his clout among the Kurds. Ocalan is behind bars, but his ideas continue to sway events on the ground.

The primary reason for Ankara’s military operations since July, the rage of the Justice and Development Party (AKP) and the looming war can again be found in Ocalan’s words. According to the minutes, Ocalan said the following in February 2013: “The AKP is after hegemony. … We can’t allow this to happen. ... I won’t become an instrument to that. The AKP must not become hegemonic. This is my only condition.”

In short, Erdogan’s centralist vision and Ocalan’s decentralized approach are locked in a bitter war. Rojava and the besieged Kurdish settlements in Turkey are the battlefield of this war.