Is Syrian regime about to retake Raqqa?

The Syrian army has launched an unprecedented battle in Raqqa province, the stronghold of the Islamic State in Syria, and is making its way toward Tabqa city, the second-largest city in the province. 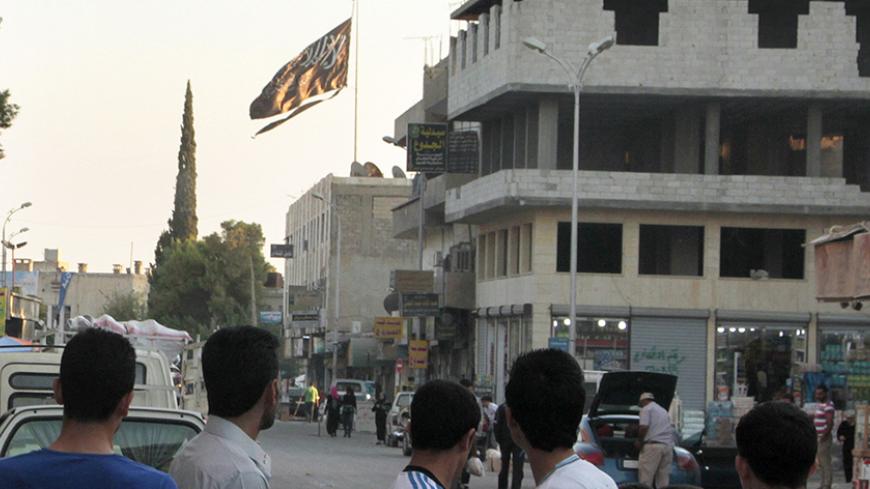 DAMASCUS, Syria — While most Syrian areas have been under a cease-fire since Feb. 27, fighting has been raging between the Islamic State (IS) militants and the Syrian regime forces following the IS attack on the villages to the north of Hama’s eastern countryside that same day. The official Syrian news agency, SANA, reported on that day the “death of six people in a car bomb by IS at the entrance of al-Salamiyah.”

In another report, SANA reported, “The Syrian army managed to circumvent IS' attacks on many of the areas under the army’s control.”

IS’ attack on the eastern countryside of Hama comes as a reaction to the Syrian forces’ progress on the Salamiyah-Athriya axis all the way to the administrative border of Hama and Raqqa. The Syrian army launched its operations from the area of al-Salamiyah in the Hama countryside 30 kilometers (19 miles) east of Hama on Feb. 10, according to Jamal Hazouri, a war correspondent accompanying the Syrian army forces who talked to Al-Monitor via Skype.

“The Syrian army has managed to secure the desert highway from al-Salamiyah area all the way to the village of Athriya, linking al-Salamiyah-Raqqa road to al-Salamiyah-Khanasir-Aleppo road. It is the only land route under the control of the Syrian army, linking the southern regions under its control to the northern areas,” he said.

Hazouri added, “The Syrian army started advancing from the town of Athriya toward the southeastern countryside of Raqqa to the village of Zakia, located on the administrative border of Raqqa. The town is seen as a strategic location to the north of the road from Athriya leading to the cities of Tabqa and Raqqa, where IS is located on the other side [of the road]. This is a strategic location linking the provinces of Hama, Raqqa, Deir ez-Zor, Aleppo and Homs.”

Hazouri confirmed that the Syrian regime’s forces were able to control al-Masbah hill in addition to three other hills to the side of Zakia. He said, however, that the regime forces have been targeted by dozens of car bombs and missiles on the Raqqa-Athriya axis in an attempt on the part of IS to stop their progress.

In terms of the forces participating in the battle alongside the Syrian army, he noted that hundreds of young people from the tribes of Raqqa and Deir ez-Zor are taking part in the battle, fighting under the banner of the national defense forces. These forces consist of a militia formed by the regime to include young volunteers, be they Syrians or foreigners. They have been fighting alongside the army since the beginning of 2013.

Hazouri believes that revenge played a major role in the raging battle, as Syrian soldiers and the tribes’ young men fighting alongside the regime army are using this battle to avenge many of their comrades and friends who were killed at the hands of IS at Tabqa military airport on Aug. 28, 2014, following IS taking control over the airport, and to extract retribution for massacres IS has committed against Syrians.

On the importance of the regime’s military campaign, retired Syrian Brig. Gen. Aktham Abu Hamdan told Al-Monitor that the Syrian regime forces’ advance toward the town of Zakia threatens the existence of IS in the southern countryside of the province.

Hamdan told Al-Monitor in Damascus, “The Syrian army’s control over the town of Zakia and its surrounding hills will allow its troops to have within their range of sight large areas of the Raqqa countryside."

He explained that this would mean that "the regime forces would be able to implement their maneuver warfare and would turn machinery and vehicles into easy targets. Given that the battle is now waged in open spaces, any possible direct clashes between the Syrian army and IS fighters in the near future is virtually impossible. This is why the Syrian army is primarily relying at this stage on remote and medium-range heavy weapons.”

Hamdan believes that Feb. 4 statements by the military adviser in the Saudi Ministry of Defense office regarding a military intervention to fight against IS contributed to the Syrian political leadership's decision to launch the battle near Raqqa to prevent any Saudi ground military intervention. He said the Syrian regime, backed by Russia, seems to be in a race against time with the United States and its Kurdish allies to launch the battle for Raqqa.

“The Syrian regime does not want the Kurds to control Raqqa despite their military alliances, since it fears the Kurds will exploit their control over the area extended from Ain al-Arab region [Kobani] eastward to Afrin in the west, and the establishment of a self-rule region in the future,” Hamdan said.

On whether he expects the Syrian regime to advance toward Raqqa in the near future, Hamdan said he does not think the battle will develop beyond this point, and the two parties will remain in a state of advance and retreat in a narrow space between the countryside of Hama and the countryside of Raqqa, noting that IS will not allow the Syrian army to easily advance in the regions under its control.

IS did not take the Syrian army’s breach lying down. The organization’s forces attacked Khanasir town Feb. 23 and tightened their grip on it, thus blocking the only road to northern Syria that is under the regime’s control and that passes through Athriya-al-Salamiyah front, the main starting point for the regime toward Raqqa’s countryside.

A leader from the national defense forces participating in the battle told Al-Monitor over Skype on condition of anonymity, “On Feb. 22, we advanced toward Zakia village and controlled several spots. We also advanced toward Marina Mountains. We are closer to opening the road to Tabqa city. But IS’ attack on Khanasir distracted the fighters and increased pressure on our forces, especially since its attack coincided with a violent counterattack on the Zakia-Athriya front.”

Regarding the next steps, the same leader in Athriya said, “Our operations will continue along the Athriya-Raqqa axis, and our forces will secure the road from Athriya to Khanasir. The Russian air force will protect the two forces [on the Athriya-Khanasir and Athriya-Raqqa axes] against any attacks that might risk us losing the regions we retook.” The Syrian regime managed to regain control over the town of Khanasir on Feb. 25.

Abdel Rahman Daoud, a political analyst close to the Syrian regime, told Al-Monitor, “The Syrian army will stand its ground in the Raqqa battle because regaining the province is an important step to eliminate the danger of division, and because the Russian leadership wants to block the way to any US attempt to control IS’ main stronghold amid the public field race between Russia and the United States.”

The Raqqa battle is still relatively far away if we look at it from the perspective of distances that the Syrian army would have to cross. But from an ambitious perspective, it has become imminent. IS has blocked the road the Syrian regime would need to cross to reach the north of the country. This might make the regime’s ambitions harder to fulfill.