Islamic State militants in Raqqa are now surrounded as Syrian Democratic Forces cut off the last land route to and from the city, foretelling an imminent battle to liberate IS' capital. 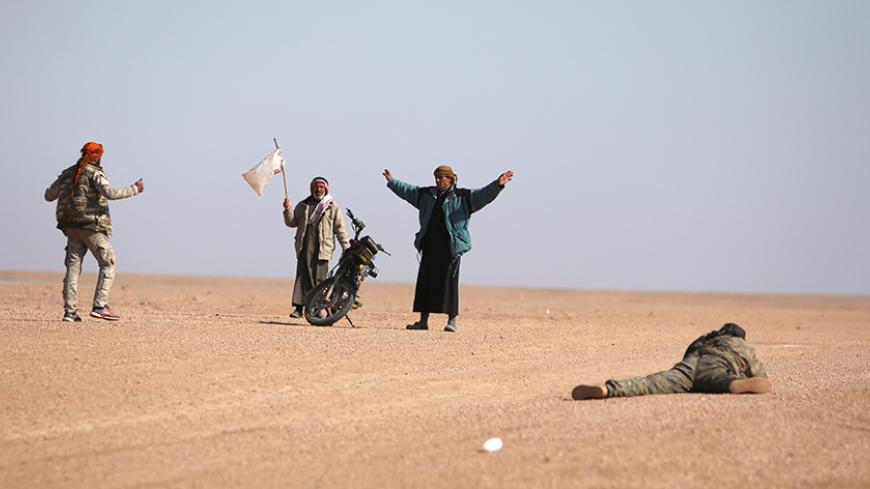 GAZIANTEP, Turkey — After the Syrian Democratic Forces (SDF) cut off the last road that connects Raqqa to Deir ez-Zor city, stretching along 162 kilometers (100 miles) to the east, on March 5, all land supply routes leading to and from Raqqa’s center and constituting the main moving space for the Islamic State (IS) to connect the regions in northern Syria to its east were closed. The SDF controls the area, which is located on the administrative borders of Deir ez-Zor in east Syria, along 30 kilometers (19 miles) from al-Kubr village in the western Deir ez-Zor countryside to the northern bank of the Euphrates River.

The main road between Raqqa and Aleppo, stretching along 200 kilometers, was blocked after Syrian President Bashar al-Assad’s forces took control of al-Khafsa village in al-Bab, in Aleppo’s eastern countryside on the Euphrates’ west bank, March 8.

The main road between Raqqa and Damascus that stretches along 440 kilometers to the south was closed after the pro-regime forces, with Russian support, recaptured from IS control the historic city of Palmyra, 225 kilometers from Raqqa, on March 2.

The road leading from Raqqa to Hasakah and stretching along 190 kilometers to the northeast was closed Dec. 28, after the SDF took Tal Saman village and its power station located in Raqqa’s northern countryside, roughly 27 kilometers from the center of Raqqa.

Operation Wrath of the Euphrates, which is spearheaded by the SDF and its military wing, the Kurdish People’s Protection Units (YPG), enjoys air support from the US-led international coalition against IS. On Feb. 4, it began its third phase to besiege Raqqa and eradicate IS in one of its main strongholds in Syria.

Operation Wrath of the Euphrates spokeswoman Jihane Sheikh Ahmad said Raqqa is now isolated. She told Al-Monitor, “Our forces have tightened the noose on Raqqa. We have advanced thanks to the increasing air support and military participation from the international alliance.”

She added, “Within a short period, we took complete control of Raqqa’s countryside and liberated hundreds of villages and strategic hills. We reached the Euphrates River from the east and the Euphrates Dam from the northwest.”

Ahmad did not specify a timeline for the battle: “The battle might take months, but definitely not years. We are sure we have enough power and the number of our men is increasing because we have the support of residents of the villages in the city and of the anti-IS coalition.”

Independent Syrian military expert Abdul Nasser al-Ayed said that the supposed timeline of the Raqqa battle might be months. He told Al-Monitor, “I think the battle will not last long, despite the propaganda saying that Raqqa is IS’ fortress. Its fall is imminent, and it will take everyone by surprise.”

The SDF advanced in the western countryside of Deir ez-Zor, entering areas administratively annexed to the provinces of Raqqa and Deir ez-Zor.

“IS lacks a supportive environment in the western countryside of Deir ez-Zor; there are not many people affiliated with it and [Arab] tribes there do not want to interfere in the battle between IS and the Kurds,” Ayed said.

Arab tribes see IS as an occupying force and a de facto power, while viewing the Kurds as foreign invaders because they are not local to the Sunni Arab area.

One year after IS announced its so-called Islamic caliphate in June 2014, its militants controlled half of Syria’s area, estimated back then at about 90,000 square kilometers (35,000 square miles), out of the country’s total area of 185,180 square kilometers. IS was able to effectively do away with the border between the areas of Iraq and Syria that they managed to control.

Ahmed said, “We managed to take control of the entire countryside of Raqqa, except for the city center, in addition to a part of Deir ez-Zor. We seek to eliminate the organization in its main stronghold. If we pull this off, we would liberate Syria and the entire world from the filth of IS.”

Ahmed said the Arabs participating in the battles of Raqqa constitute 80% of the troops and military formations locked in the battles, which include the Syrian Elite Forces, the armed wing of Syria’s Tomorrow Movement, the military council of Deir ez-Zor city, the SDF and Sunni tribal men.

Ayed said it is unlikely that IS will be completely rooted out. “The Kurds and the SDF might be victorious in the military battles against IS but it is difficult to eradicate the religious and security ideology of the group,” he said. He noted that IS is not a political party or a military institution, “but a political social movement that emerged as a result of the feelings of oppression and inferiority experienced by nearly a century among large segments of Muslims. Even if IS is buried alive and militarily crushed, it would remain a specter that would emerge once again.”

IS has lost one-third of the areas in Syria it had controlled in the past two years, Ayed said.

He said the militants’ morale is completely damaged, given the large number of military fronts against it in Syria and Iraq, not to mention the heavy losses it has incurred in the battle of Mosul.

Ayed said, “IS has entered its last military phase and will soon turn to its secret hiding places and sleeper cells, which were earlier prepared [in case of military failure].”

Now that the noose is being tightened on Raqqa, IS militants have become trapped in separate geographic areas. Raqqa is completely isolated now from three fronts (the west, north and east), and from the south on the Euphrates River. It is also besieged from the air due to airstrikes carried out by the international coalition. Meanwhile, the SDF surrounds Deir ez-Zor from the west and the north. The Assad regime has surrounded the countryside of Homs and Palmyra to the west and south, insulating the areas there from Raqqa.