The Syrian regime is closing in on the Islamic State in Aleppo, while securing a foothold in Raqqa’s outskirts, where US-backed rebels launched their offensive to liberate the city. 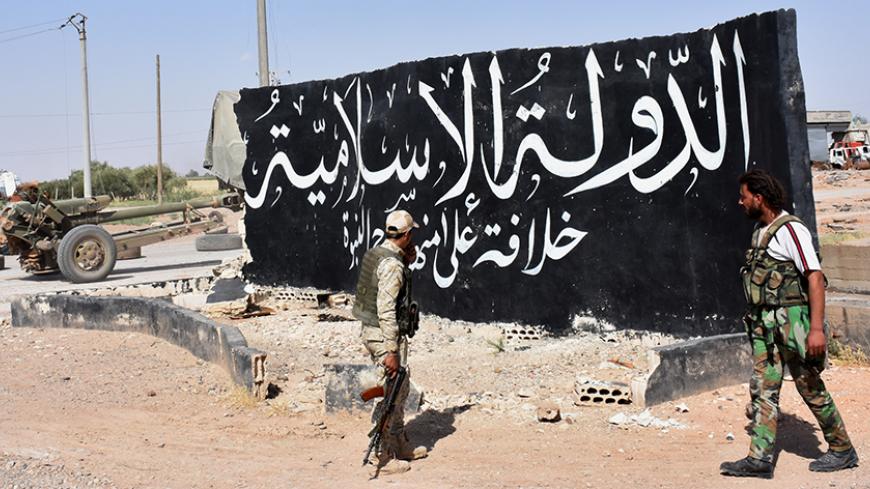 Syrian pro-government forces set up a road checkpoint next to a mural reading "Islamic State" after taking control of the northern town of Maskanah, Syria, June 5, 2017. - GEORGE OURFALIAN/AFP/Getty Images

ALEPPO, Syria — The Syrian regime forces continue their military operations in Aleppo’s eastern countryside, and with that, towns and villages are slipping out of the Islamic State (IS) grip. On June 4, IS suffered its biggest losses in this attack, as regime forces took control of Maskanah town, the last inhabited neighborhood under IS control in Aleppo province, according to the administrative division of IS.

Apart from some deserts and hills that are still under IS control in the Syrian Desert in the extreme eastern countryside of Aleppo, where there are no villages or inhabited areas, IS has left Aleppo after losing in Maskanah, or Muslima, as the Islamist group likes to call it.

This is the second province that IS has lost in Syria, after the Syrian Democratic Forces (SDF) took control of al-Baraka province, the IS name for Hasakah, at the end of February 2016.

With the Russian air raids and the increased shelling that began May 2 in eastern Aleppo, IS militants had to retreat from the Jirah air base and from several villages and towns in the eastern Aleppo countryside that the regime forces, made up of Qawat al-Nimr and Liwa al-Quds, invaded. Gen. Suheil al-Hassan led the forces, with the support of groups affiliated with Lebanese Hezbollah.

However, the advance of the regime forces stopped when they reached the outskirts of Maskanah on May 25. Intensive pre-emptive shelling no longer did them any good, with IS’ insistence to stand their ground in the town that was the organization’s stronghold and cornerstone in Aleppo after losing Manbij, al-Bab and Dayr Hafir.

The regime forces did not attack Maskanah directly; they imposed a blockade on it and infiltrated into the villages in the south and west of the town, taking control June 3 of around 22 villages, mainly Judayaa Kabira, al-Mahmoudiya and al-Hamraa. IS forces in Maskanah town were hemmed in from three sides: the south, west and north. Thus, they retreated June 4.

Abu Hamza, an inhabitant of a town close to Maskanah, was displaced to Jarablus, where his relatives live. He traveled with his family on a farm tractor. He told Al-Monitor, “Maskanah and all villages around it have been deserted due to the heavy shelling. We escaped death and carried with us our basic necessities only.”

The Syrian regime advance in Aleppo’s eastern countryside in the past few days has given it many benefits. For one, it has solved the water problem of Aleppo and regained June 4 two pumping and water purification stations in the west of Maskanah, which are the only sources of water for Aleppo, apart from al-Khafsah station. Moreover, the regime control of wide stretches of fertile land constitutes a good source of income from crops.

On the military level, Maskanah’s strategic location on the Aleppo-Raqqa highway allows the regime forces to put their hands on the supply routes between Aleppo and Raqqa.

The regime forces continued their military operations and benefited from the Russian air raids and artillery shelling. On June 6, they reached the administrative borders of Raqqa by taking control of villages in east and south Maskanah, mainly Khurbat Mihsen, Tarqawi and Beer Sabe.

The regime forces have found a footing in Raqqa for the first time since 2014. But the SDF, only 20 kilometers (12 miles) away from the regime forces, mobilized its forces in the west and south of al-Tabqa and took control of Alboassi village June 6, after battles with IS. The SDF seemingly wants to close the road to the regime forces to prevent their advance to Raqqa.

On June 8, regime-affiliated aircraft launched raids on the western countryside of Raqqa, targeting IS locations in Deir Mleihan, Debsi Afnan and al-Qadisiya, according to the SANA news agency.

The regime forces apparently aren’t as interested in their advance in Aleppo’s eastern countryside to reach Raqqa as they are in securing their supply route to Aleppo and widening their control in the east of the city to reach the Euphrates River.

As soon as the regime forces took control of Maskanah, they opened two new attack axes to expand Athreya-Khanasir road, which is a narrow pathway connecting Aleppo to the center and south of Syria. It had been an easy target for IS attacks in recent years and was blocked several times.

The regime pushed forward troops affiliated with the Syrian Republican Guard along with Qawat al-Nimr, which launched an attack on nearby IS sites from the town of Khanasir in the south of Aleppo. On June 3-4, they took control of Tallat al-Alam and the Tuweihina mountain range.

The second axis was in the south of Athreya village in the eastern Hama countryside. On June 6, the regime took control of northern Maksar and al-Tina, which IS used to attack a supply route to Aleppo, Athreya-Khanasir.

As a result, the regime expanded the safety zone around its supply route to Aleppo, leaving IS out of the picture. IS is now focusing on reinforcing itself in its capital, Raqqa, which the SDF is closely approaching after announcing June 6 a major battle to gain control of the city.