Hundreds of civilians in Raqqa are forced to flee their city as the battle to liberate it from the Islamic State rages on. 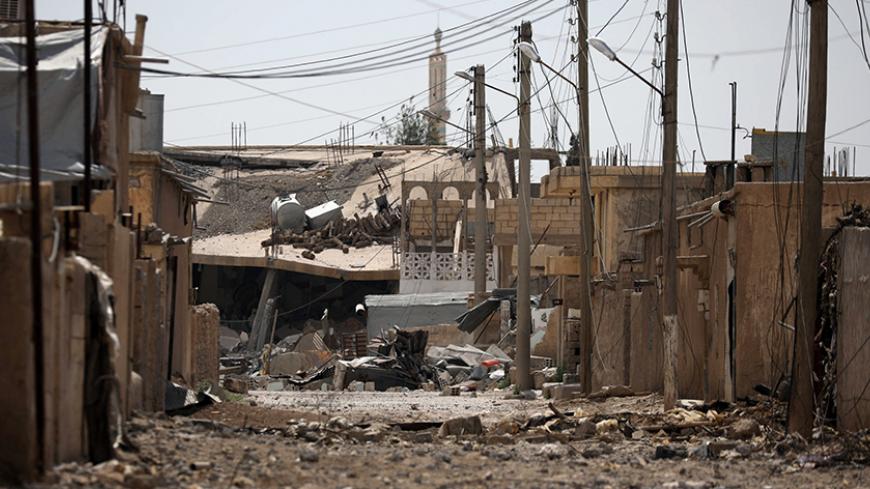 ALEPPO, Syria — Dozens of vehicles carrying displaced citizens from Raqqa province arrive in Aleppo’s northern countryside daily. Raqqa has witnessed violent battles between the US-backed Syrian Democratic Forces (SDF) and the Islamic State (IS) since June 6, when the SDF launched military operations in the province to expel IS.

The SDF took control of Raqqa city, which is located in northeast Syria, in March 2013, but IS fought the armed opposition factions in the city and took complete control of the city in early 2014. Because the fighting in Raqqa had calmed down, it soon turned into a destination for Syrian refugees from cities and villages where violent battles with the Syrian regime forces were raging.

When the US-led international coalition declared war on IS in cooperation with the SDF on the ground, and with Turkey also fighting IS through supporting the Free Syrian Army (FSA) factions, IS lost many strategic locations in Syria, mainly al-Bab and Manbij in the northeast of Aleppo and on the border with Turkey. Consequently, the forces fighting IS in Syria became readier than ever to combat the organization in one of its strongholds in Syria — Raqqa. But the battle that the SDF launched in Raqqa June 6 forced thousands of civilians to escape the war and seek safer regions.

Doctors Without Borders stated June 1 that “around 10,000 civilians from Raqqa escaped toward a camp in the north of the city.”

Media activist Abu Jaafar al-Halabi told Al-Monitor, “We are in the northeastern countryside of Aleppo where dozens of vehicles carrying civilians from Raqqa arrive in masses. Their situation is terrible, and they are transported to refugee camps in Jarablus in the northeast of Aleppo, and to refugee camps on the Syrian-Turkish border in Azaz in north Aleppo. Raqqa was crowded with refugees from different Syrian cities and villages, in addition to its original citizens. The number of displaced people from Raqqa to Aleppo’s northeastern countryside is expected to rise in the coming days.”

The journey from Raqqa is filled with danger. IS planted many mines, and some displaced people had to cross long distances reaching 15 kilometers (9 miles) on foot to avoid the mines as well as the international alliance aircrafts. In addition, taking a vehicle necessitates crossing IS military checkpoints that are everywhere in the city and on its outskirts. These checkpoints are IS’ way of keeping people from leaving.

Abu Abdullah (a pseudonym), a displaced person from Raqqa who arrived in Aleppo’s northeastern countryside, told Al-Monitor, “Death was all around us. The shelling a few days ago on Raqqa did not stop. The military aircraft was shelling Raqqa heavily. I left with my family, but we did not know if we would make it alive. We had no choice. We would have died if we had stayed in the city, which I think will turn into rubble with the violent battles.”

He added, “There are still many citizens in Raqqa. Some cannot leave due to their financial situation, while others are waiting for the right opportunity to leave with their families the soonest. I do not think anybody will stay in Raqqa, except for those who never want to leave. I cannot even start to describe the hell civilians are living there.” People who left paid up to $500 at SDF or IS checkpoints.

The displaced citizens from Raqqa who arrive in Aleppo’s northeastern countryside have trouble finding shelter. The camps there are already overcrowded. The border cities that are relatively secure due to their distance from the battles are also packed with displaced people. It is not easy to find a place to live, and prices are quite high. An apartment in Azaz, for instance, is $300 per month, which is expensive, especially given the tough economic situation and the rare job opportunities due to the war.

Mohammad al-Raqqawi, a displaced person from Raqqa, told Al-Monitor, “I just arrived in Aleppo’s eastern countryside with my family, and we will head to a camp on the Turkish border in the hope of finding a place to live. I cannot afford to rent a house because I do not have enough money. We heard about camps in slums on the borders. If I don’t find a place in the big camps that offer some services, I will have to head there with my family. I just need to set up a tent and live like others are living.” The camps in slums are unofficial and different than the organized camps.

The military operations in Raqqa are worrying, and a humanitarian disaster similar to the one in Aleppo after the regime took control of it Dec. 21 might be imminent. Civilians who left said that crowded regions are facing air raids and shelling.

Raqqa once sheltered displaced people from various Syrian cities, but it has now joined the list of afflicted regions whose citizens are seeking safety elsewhere. Amid the raging war in Syria, people seem to be worried about which cities will remain safe and capable of welcoming the displaced people escaping the woes of war.