Amid the lack of basic services in the camps for displaced people in Aleppo’s northern countryside, officials are calling on local and humanitarian organizations to step up and provide aid. 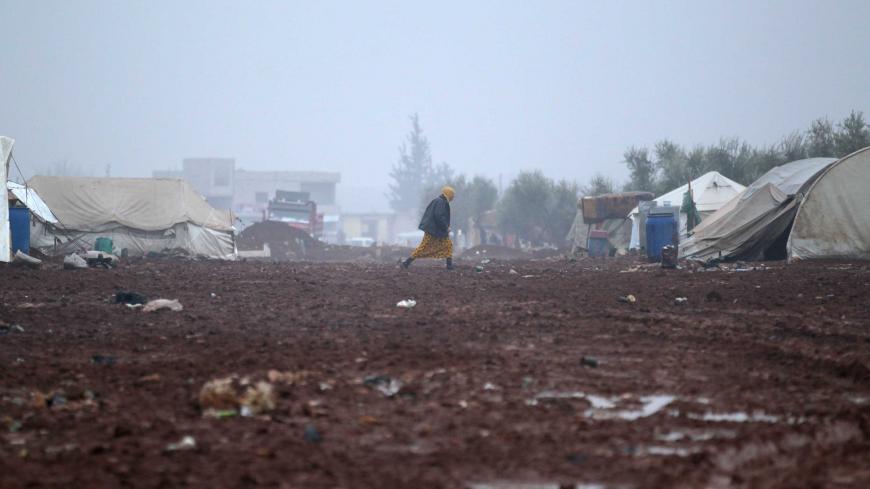 ALEPPO, Syria — Displaced persons from various Syrian cities currently living in Aleppo’s northern countryside camps, especially in the vicinity of Azaz, are trying to survive the winter under the difficult humanitarian situation. There is no heating in these camps, as local and international humanitarian organizations are reluctant to provide assistance to displaced people in unorganized camps along the Syrian-Turkish border.

This has pushed many to settle in agricultural areas near the organized camps. They have erected unorganized camps that lack the bare necessities to live. The displaced have no drinking water and no heating equipment.

According to statistics collected by activists in the area in November, there are 13 organized camps in Aleppo’s northern countryside that are home to 109,849 people, and there are 23 unorganized camps holding 61,813 people.

The organized camps received the first wave of displaced people following military operations in northern Syria in mid-2012. The camps received funding from international humanitarian organizations, such as the Qatari RaF Foundation and the Turkish IHH Humanitarian Relief Foundation. These camps are able to accommodate a specific number of people and are surrounded by a fence, preventing anyone from entering except through the main gate controlled by camp officials.

As the organized camps became full, unorganized camps were created by the displaced people in cooperation with the residents of the northern countryside of Aleppo, where the local councils employ staff to manage these camps.

The Yazi Bag camp, one of the unorganized camps in Aleppo’s northern countryside near the Syrian-Turkish border in the vicinity of Azaz, has about 510 displaced families. They lack basic services such as water, electricity and food. There are no schools for children and no health care for the sick and the elderly.

Abu Omar al-Raqqawi from Raqqa, who has been living with his family of six in Yazi Bag camp for over four months now, told Al-Monitor, “Where else could we go? I left Raqqa around four months ago after my house was destroyed by an airstrike, and I have been living here with my entire family in one tent. If I were to ever find a house in any of the neighboring villages, rent would cost me at least $150 per month, which I cannot afford. War has rendered me unemployed, and all I can do is be patient and stay here. At night, my family and I sit next to each other under blankets and try to keep warm as much as we can in our cold tent.”

In the absence of local and international humanitarian organizations, the displaced end up fending for themselves, which has proven hard to do as they now live out in the open in an area with no job opportunities.

This pushed Ahmad Sami, the head of the local council of the Ihtimlat village, to call local and international humanitarian organizations on Dec. 4 to provide food and electricity for the village’s camp.

Khalid Marimini, who is in charge of one of the sectors of the Yazi Bag camp — displaced camps in Aleppo are divided into sectors — told Al-Monitor, “The camps in the northern countryside of Aleppo are located on rough agricultural land, and the rain makes it even harder for vehicles to reach the camps. This has resulted in considerable scarcity in drinking water since tanks from neighboring villages cannot transport water to the displaced people.”

He added, “The tents they live in are nowhere near enough to protect them from the winter cold in the absence of heating equipment. Some try to cut down trees from neighboring farmland and turn them into firewood for heating, but landowners do not always allow it. People living here are doing their best to survive. For some, their daily meal consists of only potatoes and bread.”

Marimini noted, “Words cannot describe the suffering of displaced people living in camps in Aleppo’s northern countryside. It is as if they were living in the Stone Age. There are no humanitarian organizations providing assistance at the moment except the Turkiye Diyanet Foundation, which offers some aid every now and then, but it is barely enough to cover the needs of 2% of the estimated 510 families living here.”

Marimini called on local and international humanitarian institutions and organizations to intervene urgently, head to the northern countryside of Aleppo and see for themselves how hundreds of families are in dire need of heat, food, water and health care.

Displaced people in the camps in the northern countryside of Aleppo are hopeful that calls made by their officials will not fall on deaf ears. Meanwhile, the cold winter warns of a deja vu disaster, especially since many children and elderly died last year in the cold or because of bad heating equipment.