On April 2, a group of teachers from Raqqa held a meeting in southern Turkey to discuss how to proceed with restoring schooling and education once their city is liberated from the Islamic State. 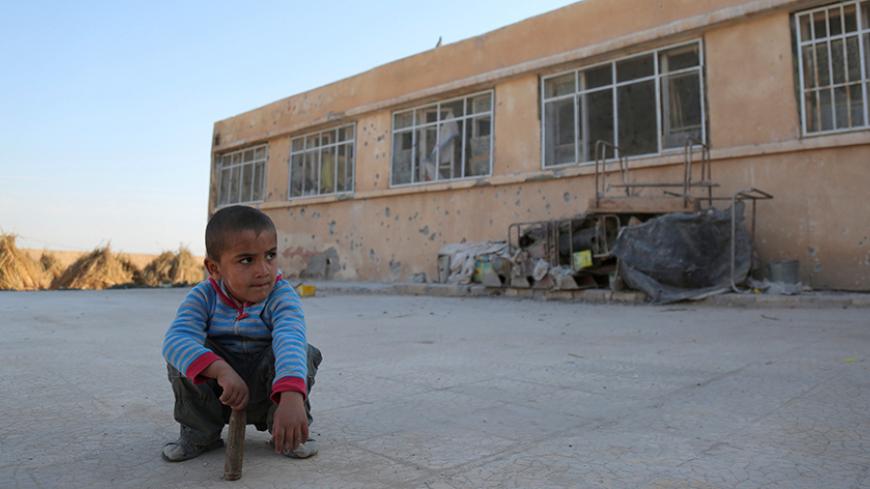 An internally displaced boy sits on the ground near a school after it was captured from the Islamic State, al-Heesha, Raqqa district, Syria, Nov. 15, 2016. - REUTERS/Rodi Said

SANLIURFA, Turkey — As military clashes rage in Raqqa’s countryside and the Syrian Democratic Forces (SDF) recapture land from Islamic State militants, Syrians are making plans for life after the jihadis are expelled. On April 2, a group of teachers from Raqqa held a meeting at the headquarters of the Center of Civil Society and Democracy in Urfa, southern Turkey, to discuss the resumption of education in Raqqa.

The attendees addressed effective and modern teaching tools that should be introduced to the educational process after three years of suspension. Since IS took over Raqqa on Jan. 14, 2014, all schools closed their doors, and IS turned some into jails or security centers.

Mustafa, a teacher who asked that his name not be used because some of his family members still live in Raqqa, said the city “has been under IS' grip for three years, and the organization has tried to spread its ideology and open Sharia institutes to mess with the minds of all generations.”

Mustafa taught students in Raqqa's schools for 15 years. He told Al-Monitor, “IS' thoughts are destructive. If we decide to fight this radical thought, we need to find new educational tools and methods to remove all traces of its extremism, violence and distortion of true Islam.”

Wafaa, a teacher who taught in Raqqa for 10 years and now lives in Urfa, said some of her family members were displaced to areas under the control of the SDF in the northern Raqqa countryside, while others could not escape and remain under siege in the city. Also asking that her last name not be given, she told Al-Monitor, “IS changed the color of the school buildings and painted them black to reflect its extremism. The first step should be to repaint the school walls with bright colors that show the real spirit of Raqqa’s citizens.”

Activists believe there are around 700,000 people besieged in Raqqa. On March 26, the SDF, backed by the United States and the international coalition, took control of the Tabqa airbase to Raqqa's west. The entire western and northern countrysides of Raqqa are now liberated.

Wafa is working on her approach with students who lived under IS. She said, “Criminality and violence marked IS' rule, and we will do our best to understand this generation and work toward improving the students’ conduct.”

Zabir, who also asked that his last name be withheld, left Raqqa for Urfa on Jan. 15, 2014. He and his friends established the dialogue forum Abber in March 2016, and he is working on promoting Article 19 of the Universal Declaration of Human Rights, which concerns the right to freedom of expression. He also seeks to create safe dialogue spaces in Urfa among Raqqa’s different social components and move these platforms to Syria.

He told Al-Monitor that the dialogue and tolerance initiatives will make up the backbone of civil peace and social security after IS is expelled from Raqqa. He added, “I believe we need to write a book about human rights culture and include it in the curriculum according to age and grade level.” He stressed the importance of integrating students in interactive creative activities like drawing, music and theater to replace “violent and criminal images and fill their minds with new, peaceful and pure memories.”

Civil activist Bashir al-Huweidi, 28, recounted the last moments before he escaped from Raqqa to Turkey on Jan. 28, 2014, saying, “I cannot forget this moment. I said goodbye to my mother, who had told me not to go outside and to be careful after the security situation deteriorated and IS took over. I was a member of Haqna movement, which organized rebellious protests against the regime and then against IS.”

Huweidi works for Urfa's Center of Civil Society and Democracy as coordinator of the Syrian Civil Society Platform program, which organized the Raqqa teachers' meeting. He told Al-Monitor, “In general, Raqqa’s citizens living in Turkey want to return and are impatiently waiting for the battles to end. Many of them have even packed.” But the situation is not that simple, he said, noting that the availability of services, security and food will determine whether they be able to.

On March 27, the SDF announced the establishment of the Raqqa Civil Council to govern the liberated regions. Co-chair Leila Mustafa told Al-Monitor the council will handle the city's administration and services. She added that the council formed an internal security force to handle security and stabilize the liberated regions, saying, “We are looking forward to the complete liberation of the city, and our council will work on managing it in cooperation and deliberation with all political, civil, social and tribal figures from Raqqa.”

Mohammed al-Huweidi, not related to Bashir al-Huwaedi, found refuge in Urfa after leaving Raqqa in mid-February 2014. He described the SDF as “disciplined,” but asserted, “No military party can determine Raqqa’s future without its inhabitants’ approval. Raqqa is part of Syria, and its future depends on Syria’s future.” He went on, “We do not mind having a civil administration to manage the liberated areas, provided it is temporary and disbands itself after Raqqa’s citizens return to elect a new representative council.”

Majed al-Uwaid is the editor-in-chief of Al-Harmal magazine, which was established in 2014 and employs Raqqa citizens in Urfa. He told Al-Monitor he did not want the SDF to enter his city, saying, “The declared project of the SDF is to establish a Kurdish state on non-Kurdish lands, since Raqqa is an Arab city.”

He concluded, “Personally, I will not accept including Raqqa in a federation in the north of Syria controlled by Kurdish units. I will not succumb to a project that deprives Arabs and Raqqa’s citizens of their right to decide their fate.”

Despite the conflicting opinions and stances among Raqqa’s displaced in Turkey about the future of their city, everyone is looking forward to an end to the ongoing battles on the city’s outskirts. All Raqqa’s citizens want the extremists gone so they can return to their city and resume their lives. 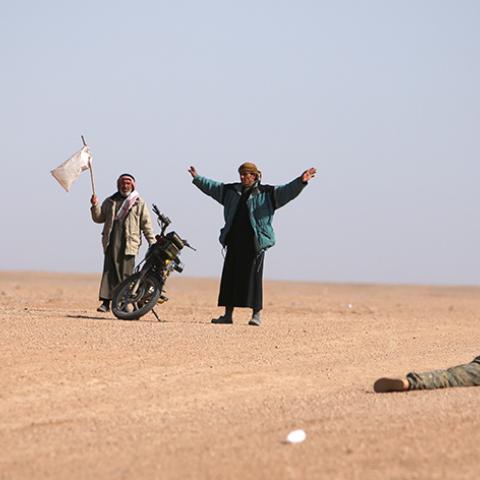