How local activists are reviving life in Raqqa

Three years after Raqqa was liberated from the Islamic State, civil society organizations have launched a campaign to revive the city’s cultural and popular aspects. 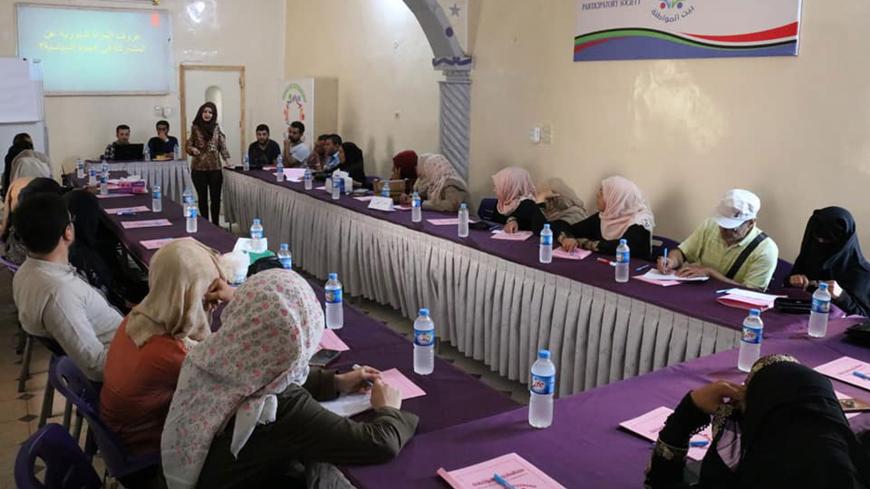 Women take part in a meeting of the House of Citizenship organization in Raqqa, Syria, seen in a picture uploaded July 25, 2019. - Facebook/bayt.almuatina

RAQQA, Syria — Independent civil society organizations operating in the city of Raqqa in northern Syria launched the “Nahnou Ahlouha” (“We Are Here”) campaign to involve women in political and civil life and empower them to eradicate extremist thought that the Islamic State (IS) spread and imposed on the city under its control for three years. The campaign, which kicked off in late December 2019, aims to raise awareness among women and rehabilitate them regularly through various cultural activities and dialogue sessions about the constitution and civil action.

The House of Citizenship organization in Raqqa participates in women’s activism and is among the organizations participating in the campaign calling on women and girls to discuss their opinions about civil and political life through dialogue.

Yamam Abdul Ghani, a trainer at the House of Citizenship, told Al-Monitor the status women in northeastern Syria earned after the end of IS' rule and their role in executive councils, among others, indicates recognition of their significant presence and right to be active on several levels.

When IS occupied Raqqa in January 2014, it intervened in the educational system before the Syrian Democratic Forces expelled it with the support of the US-led international coalition in October 2017.

Mariam, a woman in her early 50s who lives in Raqqa and refused to reveal her full name, told Al-Monitor that after IS took control of her city, her eldest daughter, 15, and her other daughter, 13, were already enrolled in the city’s public school. She said, “My two daughters wore their uniform, like their peers. IS banned the blue uniform and the governmental textbooks and imposed a black uniform. It was then that my daughters decided not to go to school anymore.”

Campaign activists who spoke to Al-Monitor said the campaign implemented several cultural and social events and training workshops aimed at highlighting the activities of civil society organizations in Raqqa and Deir ez-Zor, reflecting the cultural, social and artistic image of the area and showing photos and paintings that depict cultural elements and traditional costumes of Raqqa citizens. During the workshops, political discussions related to the war in Syria were held, as well as dialogue sessions with experts regarding drafting the constitution and protecting employees in these nonprofit and nongovernmental organizations that have no political affiliations.

Mowafak al-Zein, a painter who participated in the campaign by painting on the city walls, told Al-Monitor his paintings constitute a practical call for Syrian society to defend people’s rights to their squares and streets and to regain the real image of society, which IS had tarnished when ruling the area.

The campaign photos on social media — which many Syrians in different cities and countries reacted to — depicted traditional clothing of Raqqa citizens, social traditions, and the lives of inhabitants of the countryside and modest eastern areas. A large painting on one of the walls of a street in Raqqa showed a woman wearing a loose dress, local headscarf and gold bracelets, and handwashing her clothes. On another wall, a man playing the rebab was drawn. A third painting showed a man, his wife and their son clad in traditional clothing famous among citizens of the Syrian Al-Jazira area.

The war raging in Syria for nine years did not destroy the lives of Raqqa’s citizens; indeed, they are working hard to restore normal life in their city.

Raqqa citizen Zeina Jassem, whose brother was abducted by IS five years ago (his fate remains unknown), told Al-Monitor, “Raqqa remains ours. We are its rightful citizens. The shadow of darkness that armed organizations had cast on us is starting to fade, and the destruction is gradually ending. Wall paintings that reflect Raqqa’s heritage are filling the streets with cultural elements of Raqqa and Deir ez-Zor. Society and buildings in these two cities and the towns and villages connected to them were ravaged under IS rule.”

IS not only occupied houses, buildings and farms, but it also tightened the noose on other forms of life in the two cities and on squares and streets, trying to obfuscate their identities and alter the way men and women dress.

Hamza al-Mulla, organizer of workshops at the House of Citizenship, told Al-Monitor the organization concluded on Jan. 18 the dayslong “Voice of Civil Society in the Constitution” workshop. He noted international decisions linked to the Syrian crisis were discussed, in addition to the structure of the Syrian Constitutional Committee. They also discussed civil society recommendations and propositions about the work of the constitutional committee so that it represents the aspirations of the Syrian people. Mulla said the campaign’s third and last workshop was held Feb. 2.