A civil society organization in northern and eastern Syria has launched a project to eradicate violent extremism by promoting the role of women on the educational and economic levels. 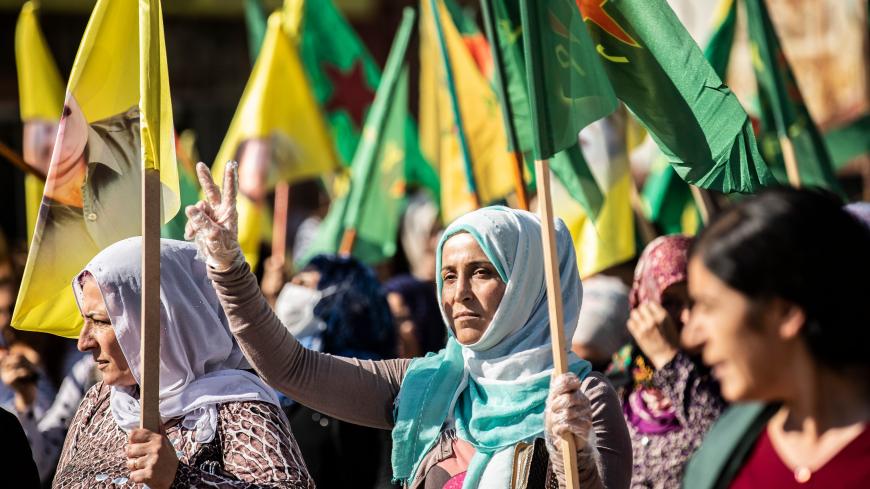 Syrian Kurdish women carry party flags, as they take part in a rally in support of the Syrian Democratic Forces and the People's Protection Forces and to denounce the recent attacks by Turkish forces on northeastern Syria, Qamishli, Syria, Oct. 24, 2020. - Delil Souleiman/AFP via Getty Images

The Democratic Solutions Organization (Demos), a civil society organization operating in northern and eastern Syria with the aim to build a democratic state to fight extremism, wrapped up its first annual conference on Feb. 17 in the northern Syrian city of Qamishli.

Some 42 public figures, including 15 women, in addition to activists, media professionals, politicians, representatives of civil organizations and community leaders, took part in the conference to discuss the results of Demos’ project dubbed “Promoting Positivity of Life to Counter Violent Extremism.”

Abbas Ali, the project manager, discussed with Al-Monitor the goals of the project, saying, “Our project aims to boost the steadfastness of local communities in the cities of Hasakah, Qamishli, Raqqa and Deir ez-Zor against extremism.”

He noted, “The project also aims to strengthen the role of women, youth and the displaced in fighting violent extremism through a number of workshops Demos held in the past year and a half as part of its project."

Abbas added that through its project, Demos focuses on several topics, most notably countering violence against women's rights and promoting pride in cultural identity.

Mirna Namis, one of the participants and supervisors of the Demos workshops, told Al-Monitor, “In the absence of a role for women in fighting extremism and terrorism, we sought — through our [Demos] project — to support women in this field. We sought ways to engage women in ensuring the safety and security of their families and protecting them from terrorism and extremism. We also discussed ways to involve women in confronting negative forces in society and the effective role that they can play in their surroundings, whether inside or outside their homes, in order to instil a culture of peace as an alternative to hatred.”

Namis praised the prominent role of education and the press in rejecting the culture of extremism and violence.

She added, “Our project directly targeted about 13,000 people and was implemented in Hasakah, Raqqa and Deir ez-Zor. The participants in the conference included decision-makers in the region, in addition to politicians, civil society activists and representatives of civil organizations, independent figures and media professionals.”

He explained, “Our project addressed the role of the internet as a double-edged sword. The internet is used by militant groups to influence the minds of young people and recruit them. The Islamic State [IS] and other radical groups have used the internet in their recruitment process. But the internet and the media are also used to expose the true intentions and plans of these radical groups, such as IS, that influence and lure a large number of youth and convince them to commit crimes.”

In regard to the possibility of women serving as a catalyst in the peace process in Syria, Abbas said, “Women can play a key role in instilling peace by preventing their husbands, sons  or brothers from participating in wars and armed conflicts and getting involved in the activities of extremist groups. Women are inherently peace-loving and their awareness of the importance of peace reflects positively on the environment in which they live. They can be a catalyst in the peace process in the country.”

Ahmed al-Duwailami, a researcher in terrorist groups affairs, said there is a spread of fanaticism, extremism and violent radicalism in many countries and societies of the region, including Syria. “The dark ideology that promotes a culture where women are robbed of their dignity, humanity and citizenship is spreading. Women have been kidnapped by IS and turned into slaves sold in markets. Extremist groups established large networks aimed to recruit women to promote their ideology in marginalized and poor areas, and to get them involved in terrorist activities. This is mainly due to women’s influence on their surroundings, especially their children. This is why initiatives like the one Demos launched is important in confronting violence and extremism and eradicating fanaticism. This will help build a better future for Syrians,” he told Al-Monitor.

Namis stressed the importance of empowering women on the economic level to undermine the plans of terrorist cells affiliated with IS, especially those active in Deir ez-Zor and its countryside. “These cells recruit women by luring them with money. They sometimes succeed in light of the deteriorating economic situation in the country. Our project aims to strengthen the economic status of women. We propose programs to integrate women in the labor market and the business sector. We focus on promoting the role of women in the countryside and the desert and in marginalized and poor areas in large cities such as Deir ez-Zor. The economic empowerment and education of women enhances their ability to confront the attempts of extremist groups to exploit their poverty and ignorance, and thus recruit them to form networks that promote extremism and hatred.”

Duwailami stressed the importance of educational reform, which has become an urgent necessity. “Eradicating illiteracy — especially among women in rural and desert areas — is a crucial need in all countries of the region, especially hot countries like Syria, to fight extremism,” he concluded.