Are latest war games just a face-saver for Riyadh?

Saudi Arabia is hosting over 150,000 troops from 20 countries for military exercises in the northeast, but while officially aimed at deterring Iran, they could have a very different purpose. 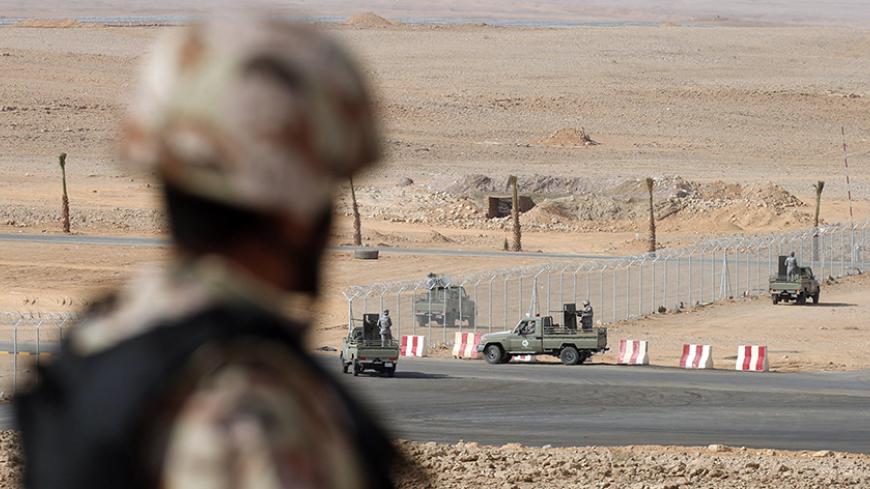 A member of the Saudi security forces stands guard as others demonstrate their skills during a military exercise in Arar, near Saudi Arabia's northern border with Iraq, March 18, 2015. - REUTERS/Faisal AlNasser

Saudi Arabia is hosting large-scale military training maneuvers on its northeast border to signal strength to Iran and provide substance to its proposed Islamic military alliance against Iran and terror groups. The highly publicized maneuvers also deflect attention from the stalemate in Yemen, where the Saudi-led coalition backing the ousted government is still struggling to defeat the Houthi rebels and their allies.

The exercises are being held around the Saudi military facility at Hafr al Batin, which has long been the home of the Gulf Cooperation Council's Peninsula Shield task force, the GCC's rapid response unit. If the numbers reported by the Saudi press are accurate, this is the largest military operation in the region since the liberation of Kuwait in Operation Desert Storm, a quarter-century ago this month.

Saudi commentary says the purpose of Northern Thunder is to deter Iran from aggression against the Gulf states. Implicit in their analysis is the Saudi assumption that Iraq or at least the Baghdad government is all but a satellite of Tehran and a potential Iranian ally in a future conflict between Riyadh and Tehran. From the Saudi perspective, Iraq has gone from being the Eastern shield of the Arab world resisting Persian and Shiite Iran to a puppet controlled by Iran.

The exercises are also intended to show the Islamic military alliance announced last December by Saudi Defense Minister and Deputy Crown Prince Mohammad bin Salman has a solid base. The alliance is intended to both deter Iran and combat terrorists including the Islamic State (IS) and al-Qaeda. The Royal Saudi Air Force has resumed combat operations against IS in Iraq after a hiatus due to the Yemen war and has deployed aircraft to Turkey to attack IS targets.

King Salman bin Abdul-Aziz Al Saud and his defense minister son are also eager to deflect attention from the Yemeni operation. They originally promised a "Decisive Storm" when they initiated the war a year ago next month. A decisive blow in Yemen against the Iranian-backed Houthis would send a sharp signal to Tehran. Iran would be prevented from building a base in the Arabian Peninsula on the kingdom's southern frontier.

Instead, it has been a costly and difficult struggle. The 10-member coalition led by the kingdom has seized control of the southern port city of Aden and parts of southern and western Yemen, but the Houthis still control Sanaa and most of the north. A bitter and brutal battle for Taez, the birthplace of the Yemeni Spring five years ago, shows no end in sight. Both sides are accused of war crimes. The Saudi coalition is blockading the Houthi-controlled north from critical humanitarian supplies from the outside world, while the Houthis prevent humanitarian supplies from reaching Taez.

The Yemeni people are paying an enormous price for the war. The conflict has become a humanitarian disaster for millions of people in what was already the poorest country in the Arab world.

The Houthis' allies, former President Ali Abdullah Saleh's loyalists, continue to sporadically fire Scud missiles into the kingdom despite assurances months ago from the Saudi military that all of Yemen's Scuds had been destroyed by the Saudis. The missile attacks are mostly an irritant, but they demonstrate the limits of Saudi military power.

Al-Qaeda in the Arabian Peninsula has expanded its emirate around Mukalla in the south this year and operates increasingly in Aden. AQAP has been a major beneficiary of the stalemate in the conflict.

Iran has largely stayed out of the war. It gives the Houthis diplomatic and political support but pays no costs for the fight. It undoubtedly calculates that when the war ends, the Houthis will still look to Tehran for support since they will have no other options.

The Saudi leadership faces a complex and interlocking series of challenges. Iran is no longer under damaging UN sanctions and is poised to pump more oil into an already glutted world market. IS and al-Qaeda are operating inside the kingdom and have bases to the north and south of it. The Yemeni war has no end in sight. Rumors about infighting in the royal family are persistent. Northern Thunder is helping project strength and international support, but the king really needs a face-saving answer to his Yemen conundrums.