Are the Saudis ready to fight in Syria?

With no end in sight to Saudi Arabia’s military intervention in Yemen, is Riyadh ready to risk major casualties by sending ground troops to Syria? 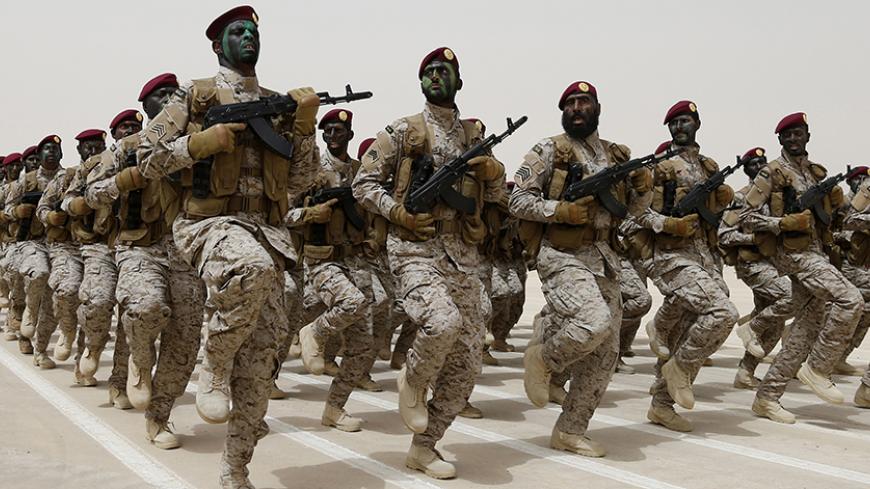 On Feb. 4, Saudi military spokesman Brig. Gen. Ahmed Asiri announced that Saudi Arabia is now ready to send ground troops to Syria to fight the Islamic State (IS). Saudi Arabia is part of the international anti-IS coalition led by the United States since September 2014. However, when it launched the war in Yemen to fight the Iranian-backed Houthi rebels almost a year ago, its priorities shifted and its airstrikes on IS subsided. In December, it launched a new Muslim anti-IS coalition, but this, too, remains ambiguous as a strategy and may be interpreted as yet another attempt by the Saudi regime to seek Islamic backing against its rival and archenemy, namely Iran. It is important to understand why the Saudis announced they are now willing to venture into the troubled waters of Syria with ground troops, allegedly to fight IS.

The 2014 Saudi airstrikes on IS were viewed by many as a symbolic gesture to convince the international community of its commitment to fight terrorism. Saudi support for various radical rebel groups in Syria, together with the ideology of IS that resembles radical Saudi religious interpretations, had prompted some observers to doubt Saudi commitment to fight terrorism. Hence the announcement to launch airstrikes on IS came at a time when the Saudi regime became increasingly suspicious in the eyes of some international commentators. The occasional airstrikes took place when King Abdullah was still king, but by the time he died in January 2015, they became extremely rare and hardly publicized in the domestic and international press.

The war on IS remained a sidelined priority for the Saudi regime as long as it was engaged in a more important southern war in Yemen. The rise of King Salman bin Abdul-Aziz Al Saud to power in January 2015 inaugurated a new era of direct military intervention in Yemen, which became the primary focus for his son, Mohammed bin Salman, the newly appointed young minister of defense and deputy crown prince.

It is doubtful that serious Saudi ground troops will be deployed in Syria despite the announced and heavily publicized promise. It must be mentioned that the regime struggled to assemble an Arab coalition willing to send ground troops to Yemen and seemed unwilling to go to war in Yemen alone. The regime counted on Gulf Cooperation Council (GCC) members, and only a handful of willing countries outside the GCC promised support. Saudis seem to have failed to convince major Arab countries such as Egypt to actively participate in any ground offensive in Yemen. Similarly, Pakistan was reluctant to join the Saudi war efforts for its own domestic reasons. So Saudi Arabia ended up fighting this war with the help of the United Arab Emirates, Qatar and countries in Africa. The main strategy of this war remains airstrikes rather than ground offensives, perhaps because of the fear of serious casualties among Saudi troops should they be heavily deployed on the ground. Without substantial ground troops, the war in Yemen is still far from achieving its declared objectives, mainly the return of the exiled Yemeni government to Sanaa and the end of the Iranian-backed Houthi rebellion. Instead, the war has led to serious Yemeni civilian deaths and the near total destruction of the meager Yemeni infrastructure.

The Saudi army has not had extensive experience in fighting on the ground beyond its own borders and may find itself in serious trouble should its leadership decide to venture into Syria. The Saudi army’s much publicized heroic performance during the Iraqi invasion of Kuwait in 1990 is not to be dwelled on too much given that almost 500,000 foreign, mainly US, troops took part in expelling the Iraqi army from the small Gulf emirate.

One does not need to be a military strategist to know that any Saudi troops on the ground in Syria will find themselves face to face with Syrian President Bashar al-Assad’s remaining army and under heavy shelling by Russian fighter jets. Moreover, Saudi ground troops in Syria will also be fighting the Lebanese Shiite Hezbollah fighters, who had been supporting the Assad regime, together with other Shiite militia that had been supporting the Syrian regime and fighting IS and similar rebel groups. Needless to say that such military engagements will definitely be bloody beyond imagination given the rise in sectarian tension between Saudi Arabia, Iran and the Shiites in general in the Levant and beyond. The recent Saudi execution of the dissident Shiite cleric Nimr al-Nimr on Jan. 2 added to this tension that is now difficult to cool down or even contain.

But if the Saudi regime does send ground troops to Syria under some kind of Turkish umbrella as anticipated, from the very beginning their mission will have to be clear. The Saudi regime needs to decide whether its troops are there to fight IS or support various Syrian rebels who are now under tremendous pressure since the Russian airstrikes began in October 2015. The Russian intervention was clear from the very beginning when Foreign Minister Sergey Lavrov announced on Oct. 2 that his strikes target terrorists who are broadly defined as “if it looks like a terrorist, if it acts like a terrorist, if it walks like a terrorist, if it fights like a terrorist — it’s a terrorist.” The Saudis do not have such a vision or definition of terrorism. Thus, it is difficult to anticipate who the Saudi troops will pledge to fight despite the announcement that ground troops will be fighting IS.

The shift in the balance of power between Assad on the one hand and the rebels on the other may have been seriously changed after the Russian intervention, which has prompted the Saudi announcement to send ground troops.

In any case, direct ground military intervention by the Saudis in favor of Syrian rebels or to fight IS may be unlikely given that the war in Yemen is far from being won. More important, the Saudi regime must seriously worry about sending its own troops to a conflict zone such as Syria where global and local fighters have been entrenched in what seems to be an unending sectarian war with no real winner on the horizon. The Saudi regime must also think about the repercussions if its own troops engage IS fighters on the ground. How would Saudi domestic opinion deal with such a possibility, albeit an unlikely one? Sending ground troops to Syria may become fatal for a regime that is yet to decide whether its aggressive regional interventions are actually beneficial or affordable. These are unanswered questions that the new Saudi leadership must think about before starting yet another adventure farther in the north.