How to reverse engineer Israeli-Palestinian peace

With Israelis and Palestinians dubious of the "peace process," a new approach is needed to restore some hope in resolving their conflict. 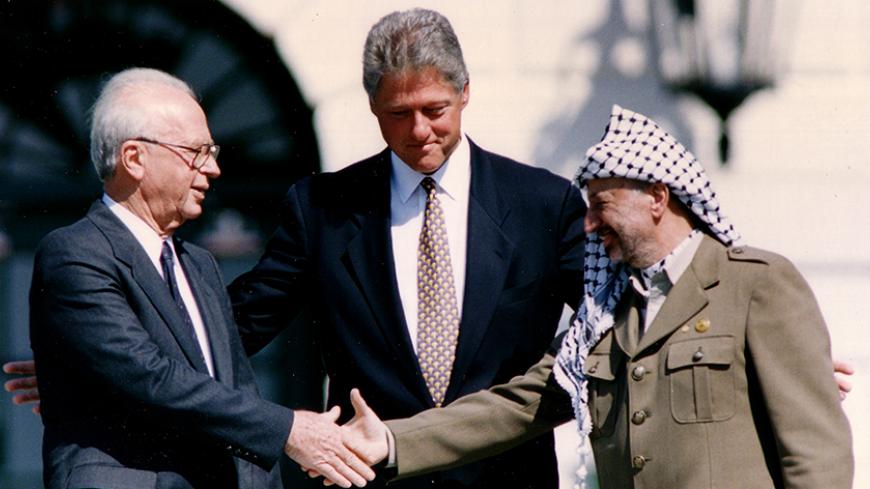 PLO Chairman Yasser Arafat (R) shakes hands with Israeli Prime Minister Yitzhak Rabin (L) as US President Bill Clinton stands between them after the signing of the Oslo Accord at the White House in Washington, Sept. 13, 1993. - REUTERS/Gary Hershorn

Who said the Oslo Accord died and took the two-state solution with it to the grave? In the Norwegian capital on Feb. 8-9, peace envoys convened from the United States, Russia, the European Union and the United Nations, the so-called Quartet. At the end of their meeting, the representatives met with Norwegian Foreign Minister Børge Brende and Ambassador Tor Wennesland, Norway’s envoy for the Middle East peace process (yes, there is such a position, believe it or not). In an announcement to the press following the meeting, the Quartet condemned “all acts of terror and violence against civilians,” and “expressed concern about current trends on the ground that pose a threat to the two-state solution.” The statement also noted that these trends require concrete steps to resume the transition to peace envisioned in the Oslo agreement. The envoys signed the announcement in anticipation of the next meeting of Quartet officials (at the level of foreign ministers), to be held days later in Munich.

Aside from such diplomatic expeditions around the world, not much is left of the “peace process” that got underway in Oslo almost 23 years ago. President Bill Clinton had been in the first year of his first term of office when he hosted Israeli Prime Minister Yitzhak Rabin and Palestine Liberation Organization Chairman Yasser Arafat at the signing ceremony of the Oslo Accord on the White House lawn in 1993. Since then, the United States has had two other presidents, and at the end of the year, the Clinton family might return to the White House if Hillary Clinton prevails over her Democratic and Republican rivals for the presidency.

It is not surprising that the overwhelming majority of Palestinians and Israelis roll their eyes when the words “Oslo Accord” are uttered. It is no wonder that new peace plans pop up every other day. Expert No. 1 proposes an interim agreement and expert No. 2 retrieves the unilateral withdrawal concept from the mothballs. The latter is actually a recycling of the realignment program (or convergence plan) — calling for a unilateral Israeli withdrawal from 90% of the West Bank — nurtured by Kadima, may it rest in peace. Then along comes expert No. 3, who would be satisfied with confidence-building measures (CBM for short). Expert No. 4 markets an ambitious outline for regional peace, and expert No. 5 toys with the idea of convening yet another international conference.

According to the Oslo Accord, the interim period, during which Israel would have full control over 60% of the West Bank (Area C), was supposed to end after five years. Instead, the diplomatic standstill on the one hand, and the tremendous increase in the number of settlers on the other hand — from about 120,000 to some 400,000 in 2015 — led the Palestinian public to believe that the Israelis' real intention was to turn “temporary control” into permanent control. Meanwhile, terror attacks and Hamas’ takeover of the Gaza Strip in 2007 convinced Israelis that “permanent peace” in the Palestinians' thinking could easily mean “temporary peace.”

Thus, the Palestinian leadership has rejected outright any suggestion of another interim agreement, including recognizing a Palestinian state within temporary borders, as suggested by the Quartet in its road map proposal 13 years ago. Meanwhile, the Israeli public is concerned that any territory Israel evacuates in the West Bank and East Jerusalem in the context of a permanent agreement will turn into a “second Gaza,” especially since they are expected to turn over a durable asset for a “piece of paper.”

The necessary loophole in this Gordian knot is a formula designed to assuage Palestinian fears of yet another interim agreement and give the Israelis firm guarantees (as much as possible) that a permanent peace will not devolve into a temporary peace. To advance these combined objectives, all the relevant international and regional players must be enlisted and the best resources and means put at their disposal. According to one possibility, a “reverse engineering” method, one would first have to reach agreement on the paramaters of an entire structure and a reasonable timetable for its construction. After that, the building begins, from the lowest level up to the pre-planned roof.

What does that mean in the Israeli-Palestinian context? It means that it is necessary to blow the dust off of UN Security Council Resolution 242 (1967) and then move beyond it to a resolution recognizing a Palestinian state based on the June 4, 1967, borders. This should be subjected to mutual land swaps that the sides decide on within a set period of time. Similarly, negotiations would be held on all the other core issues — Jerusalem, water, refugees, security arrangements and more. If agreement is not reached by the dates set, the contentious issues would be sent to binding international arbitration, based on the model used for resolving the dispute between Israel and Egypt involving sovereignty over Taba, in the Sinai Peninsula, in the years after the signing of their peace treaty.

With the passing of the UN resolution, the member states of the Organisation of Islamic Cooperation, which includes Arab League members, would recognize the State of Israel and its right to self-determination. Negotiations could then begin on cooperation in the war against terrorism. In the next stage, the Israeli government would pass an evacuation/compensation law to allow the settlers living beyond the separation fence to begin new lives west of the Green Line. Palestinian “border neighborhoods” in East Jerusalem would be transferred to the control of the Palestinian government.

Israel would carry out Prime Minister Benjamin Netanyahu’s commitments in the 1998 Wye River Memorandum to transfer territories from Area C (Israeli control) and Area B (Palestinian civil control, joint security control) to full Palestinian control and to free imprisoned Fatah members. The Arab League would pass a resolution forbidding support to Hamas and requiring the organization to transfer border crossings and responsibility for internal security in Gaza to a joint security apparatus consisting of Palestinian government forces and a multinational force established for that purpose. Members of the new force would be deployed for 10-15 years in every area that Israel transfers to Palestine.

The next stage involves opening Arab embassies, including for Palestine, in West Jerusalem. All other foreign embassies would move from Tel Aviv to West Jerusalem. A special fund would be established to pay compensation to Palestinian refugees and Israelis who left or were expelled from Arab states when Israel was founded and cover the absorption of settlers evacuated across the Green Line. In the final stage, with the signing of a permanent agreement and completion of the process of transferring territories to the Palestinians, Israel and the Arab states would engage in trade and tourism and strive for inter-religious and intercultural reconciliation.

This author has presented the principles of this outline in closed forums involving various people from Israel, the Palestinian Authority, the Arab states, the United States and Europe. The most common response has been, “You've convinced me. Now you only have to convince Netanyahu.” Unfortunately, it better suits Netanyahu if the Quartet continues its globetrotting, forever and ever, issuing statements here and there about the Oslo Accord of blessed memory.