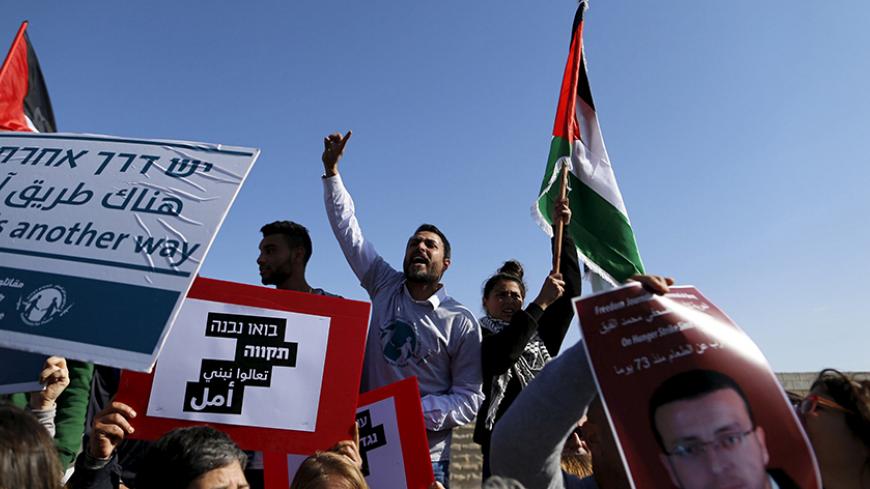 Palestinian activists take part in a demonstration calling for a better future for both people in the West Bank city of Bethlehem, Feb. 5, 2016. - REUTERS/Ammar Awad

Six years ago, in the winter of 2010, the Israeli-Palestinian​ Bereaved Families Forum awarded me the organization’s medal, presented each year to Israelis and Palestinians active in areas related to the organization’s objectives and goals. Over the course of my career in journalism, I have declined prizes from many groups and movements, but I could not turn down this particular organization, which this month celebrates 20 years of peace activism.

At the awards ceremony, held in Beit Jala, near Bethlehem, hundreds of bereaved families, Jewish and Palestinian, assembled and met each other. They talked about possible ways to bring their two peoples together and end the conflict between them.

In essence, the central concept guiding the forum is similar to that of other peace organizations: to breach the walls of demonization and show that we are all human beings. This message resonates far more powerfully, however, when it comes from the mouths of bereaved family members, those who have lost loved ones as a result of the Israeli-Palestinian conflict but still choose hope instead of revenge. I don’t recall much of what I said at the award ceremony, with the exception of one sentence: “You constitute a great source of light in the terrible darkness that prevails outside.” Now it seems that Israel seeks to extinguish even this last remaining source of light.

In January at a gathering of the Peace NGO Forum, the Coordinator of Government Activities in the Territories announced a policy change regarding permits for Palestinian peace activists from the territories to enter Israel. It affects well-known, veteran activists who have been organizing peace events for years.

Until now, peace organizations were required to renew entry permits for their activists every three months. Now, however, Palestinian peace activists can only obtain entry permits valid for 180 days, at the end of which time they must wait another 180 days before applying for another permit. Because the 180-day wait period takes effect at the expiration of activists' last three-month permits, many have lost permission to enter Israel for the time being and their right to apply for a permit in the near future. Another difficulty is the inability to contest the rejection of applications on security grounds. In effect, the new policy is a death sentence for activities for peace like those of the Bereaved Families Forum.

The Bereaved Families Forum was founded in 1995 by Israeli businessman Yitzhak Frankenthal, whose son Arik was abducted and murdered in 1994 by a Hamas cell while hitchhiking from the Re’em Junction in southern Israel. The idea of establishing the forum took root in Frankenthal’s mind when he met with then-Prime Minister Yitzhak Rabin. Despite his son having been murdered by Palestinians, Frankenthal described his vision for peace to Rabin, at which point the prime minister asked him, “Where are the bereaved Palestinian parents?” This conversation led to a forum that unites Israeli and Palestinian families who have paid the ultimate price and want to bring hope to the two peoples.

“They announced to us that there is a new policy because of the ‘situation,’” Mazen Faraj, the Palestinian general manager of the forum, told Al-Monitor. “In my opinion, this is a new policy against peace organizations. Evidently they prefer to hear the voices of death and revenge and strangle the other voices, of reconciliation and dialogue.”

Even Faraj’s entry permit was revoked, leading to the cancellation of all the programs and activities that he had planned. “So far, we have held about 400 meetings in schools and have led numerous workshops for youths and adults. Now, everything has ground to a halt,” he explained. “Who am I to talk to? How will I be able to speak to the Israelis? I am wondering what I’ll do now, reconcile with myself?”

Faraj’s brother, Majid Faraj, is the director of the Palestinian Authority’s General Intelligence Service. They are sons in a bereaved family. Their father was killed in the Bethlehem area during the second intifada.

“Israeli soldiers killed my father,” Mazen said. “He was making his way home from Jerusalem to Bethlehem. Shots were fired, and he was killed. The only thing he was carrying in his hands were groceries that he wanted to bring home. All my brothers have spent time in Israeli prisons, myself included, from the age of 15, during the first intifada. We all think that we need to talk, to get to know the other side, and thus pave the road to reconciliation.”

In 2014, Mazen received the Dalai Lama Compassion Prize for his peace efforts. Even now, in the storminess of the current intifada, he persists in his activism despite the tremendous dilemmas that confront him every day.

“I woke up today at 4:30 a.m. to the sound of shots fired by soldiers who had entered in order to arrest several children in the refugee camp,” he said. “My daughters also woke up, screaming and crying, in great fear. I had to calm them down and afterward, we couldn’t go back to sleep. At 9 in the morning, I was in my office, and I started to talk about reconciliation and peace, to do something that I believe in. Think of the mental difficulty involved in this.”

Faraj’s counterpart, Israeli general manager Doubi Schwartz, told Al-Monitor that it is important, during these days in particular, to display hope and show that all is not lost. “The Israelis ask us all the time, where is the Palestinian peace camp? So, here it is. It exists. But it is being halted.”

According to Schwartz, Palestinian peace activists in the West Bank have become targets for derision in the refugee camps. “They call them ‘Abu Salem’ ["Father of Peace"] and ask them sarcastically, ‘Where is your peace? Even the Israelis don’t want to hear you.’ It is tremendously frustrating and a great blow to anyone who believes that there’s another path, especially during such dark days as these.”

Schwartz believes that the new restrictions on entry permits represent a deliberate policy shift. “We feel that they are using administrative and technical pretexts against us,” he said. “When we look at what’s happening with other peace organizations [such as the Israeli campaigns against watchdog nongovernmental organizations and the transparency law], we can’t help but feel that they simply don’t want to hear us and the alternate message that we want to convey.”

The Bereaved Families Forum is not planning to celebrate its 20th anniversary. “We have no reason to celebrate,” Schwartz lamented. “We find it tremendously frustrating that for 20 years, we have been talking, yet people continue to die. We have no sense of great victory. We are people with psychological scars, with great pain inside. We will celebrate when people stop dying.”