According to Israeli Knesset Speaker Yuli Edelstein, the president of the European Parliament opposes labeling settlement products, despite the official EU position. 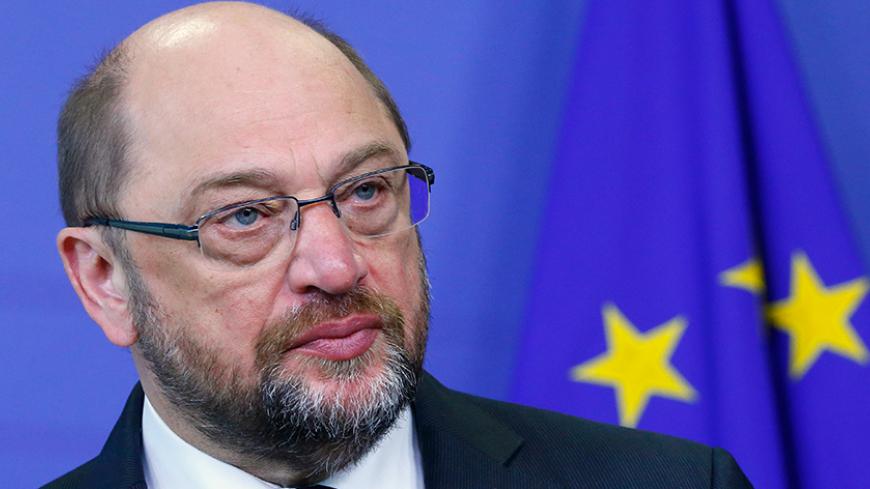 The dispute over the settlements, for years a divisive issue in Israeli politics, has recently penetrated into the heart of European politics, too. There’s growing anger in the European Parliament against President Martin Shultz, who has apparently adopted the position of the Israeli right regarding an economic project in the occupied territories.

Twenty-six members of the parliament from different factions are demanding that Schulz clarify the meaning of a Jan. 14 Facebook post by Knesset Speaker Yuli Edelstein: “I was pleased to hear today from European Parliament President Martin Schulz, with whom I met in Berlin, that he opposes the labeling of products from Israel.” Despite his choice of words (products from Israel, not products from West Bank settlements), it’s safe to assume that the Knesset speaker, who himself lives across the Green Line, knows that the labeling pertains only to products made in the settlements, which are not recognized internationally as part of the State of Israel.

The meeting between the two parliamentary leaders took place five days before EU foreign ministers approved a resolution stating that all agreements between the union and Israel do not apply across the Green Line. As in the decision to label settlement products, the ministers were careful to make clear that the resolution does not constitute a boycott; it simply provides European consumers with information about the provenance of products they want to buy.

According to Edelstein’s comments, Schulz agreed with him that those who would be most affected by the labeling of settlement products marketed in EU member states would be Palestinian workers. The Knesset speaker wrote in the same post that he had told his European colleague, “Israel will survive the product labeling! Not so the thousands of Palestinian families of those who work shoulder-to-shoulder with their Jewish friends and conduct coexistence there. This will hurt their economy and families and will also destroy the seeds of peace in those employment areas.”

In a particularly pointed letter sent by the European lawmakers to the president of the EU’s top institution, they stressed that all the Palestinian commercial associations had welcomed the labeling decision, as did 550 prominent Israeli figures, among them Nobel laureate in economics Daniel Kahneman. Signatories of the letter noted that the cost of the Israeli occupation, which includes the theft of lands, water resources and other infrastructure, is estimated at some 85% of the Palestinian gross domestic product. The members of parliament expressed surprise at the fact that Schulz presented a position contradicting the decision by the body he heads, even as Israel keeps expanding the settlements and thus undermines the two-state solution.

Saeb Erekat, in his role as secretary general of the Palestine Liberation Organization, wrote Schulz an equally sharp letter, contending that his view of the settlement enterprise is not commensurate with a two-state arrangement. In the letter, a copy of which was obtained by Al-Monitor, Erekat defined the situation in the territories as “a reality of apartheid.” The Palestinian-Israeli Peace NGO Forum, which also responded to Schulz’s surprising declaration, reminded him in a Jan. 16 letter that the apartheid regime in South Africa had also claimed that an embargo would hurt the black workers who made a “decent” living in the vineyards and mines owned by the white minority. The forum is anxiously awaiting Schulz’s response.

Schulz is acquainted with the forum, an umbrella organization of peace groups. On a February 2014 visit to Israel he had an opportunity to meet the group’s previous director, Ron Pundak, who passed away not long after. Pundak participated in a private dinner at which the European visitor heard about the serious damage inflicted by the government’s settlement policy on the relationship with the Palestinians. Another participant in that dinner spoke to Al-Monitor about it on condition of anonymity. He said that he had complained to Schultz that too many European states are avoiding the labeling of settlement products. That person has since been elected to the Knesset on behalf of the Zionist Camp, headed by Isaac Herzog.

That same Knesset member was noticeably silent when Herzog boasted this past November that he had told the British ambassador to Israel that product labeling “rewards terror” and that Europe would not achieve a thing with measures of this kind. Like the other members of his parliamentary faction, the newly elected politician did not make a sound when he read his party chairman’s claim to Ambassador David Quarrey that labeling would be tantamount to a “blow to tens of thousands of Palestinians employed in factories in the West Bank under proper conditions who bring in an income for their families.” Prime Minister Benjamin Netanyahu could not have said it better.

On the other hand, how can one complain that the president of the European Parliament opposes labeling (not even boycotting) of products originating in the occupied territories, when the leader of the Israeli opposition condemns this modest step? If members of the main opposition party are silent regarding its leader’s claim that settlement product labeling will harm the Palestinians, how does the left expect a mainstream German politician to act? How can leftist organizations expect Schulz to denounce the settlement policy, when opposition chairman Herzog and Yesh Atid leader Yair Lapid condemn them for daring to encourage the government of Brazil to oppose the appointment of former settlement leader Dani Dayan as Israel’s ambassador to Brasilia?

This is not the first time, and probably not the last, that Europe has failed to speak in a unified voice regarding the Israeli-Palestinian conflict. If leftist Jewish Israeli activists who expose the injustice of the occupation are considered “traitors” and called "plants" in their own land, it's no wonder European politicians agree that the occupation is good for the occupied. As long as the elected representatives of the Israeli public — from the radical right all the way to the moderate left — stand up as one against any measure interpreted as exerting external pressure on Israel, Europe will avoid taking a clear stand. It will strongly commit itself to advancing peace only together with a committed Israeli partner — only with the rise of a strong Israeli political camp that views the Palestinian leadership as a true partner for peace.